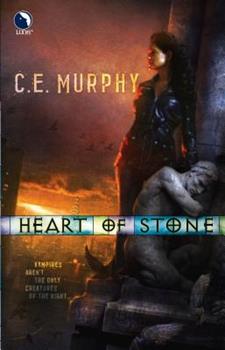 WHAT SECRETS LIE SHROUDED IN DARKNESS? Okay, so jogging through Central Park after midnight wasn't a bright idea. But Margrit Knight never thought she'd encounter a dark new world filled with magical beings--not to mention a dying woman and a mysterious stranger with blood on his hands. Her logical, lawyer instincts told her it couldn't all be real-- but she could hardly deny what she'd seen...and touched. The mystery man, Alban, was a gargoyle. One...

High-quality urban fantasy with a host of colorful characters

Published by Thriftbooks.com User , 13 years ago
Plot Summary: Margrit Knight is an idealistic lawyer who by-passed a lucrative career to work at Legal Aid. While running in Central Park late one night, she's freaked out when a tall blond man strikes up a conversation. Later, Margrit learns that he's wanted by the police after a witness saw him standing over a bloody female corpse. Margrit contacts Tony, her sometime lover who is a detective, and helps him track down the mysterious Alban. After some time, Alban convinces Margrit that he's innocent but he can't go to the police because he's a gargoyle who turns to stone at sunrise. Margrit must find the real killer to keep Alban safe, but the pressure mounts as more women are murdered each night. I think this must be one of those stories that you'll either love or hate, because the reviews seem to be split down the middle. I'm kind of baffled that folks could give this one or two stars, but we're all entitled to our own opinions. For my part, I thought this was one of the best urban fantasies I've read in a long while. It didn't smack me upside the head with its greatness, but rather it slowly drew me in and seduced me with quality storytelling. There are several aspects of this tale that rise above the crowd, and here they are... This is a simple, elegant paranormal world where five Old Races live in secret among humans. This vision meshes closely with my own views on what immortality, fear of discovery, and small numbers would mean for non-humans. They're smarter than us, they're stronger than us, but above all, they're wary of discovery by us. One-to-one, humans are no match for these creatures, but they know that as a group we could crush their existence. These races have a mutual bond - their fear of humans - and it makes strange bedfellows among the Old Races. I love the variety too. Ms. Murphy introduces us to gargoyles, djinn, dragons, vampires, and selkies. Very few novels manage to support a wide cast of nuanced characters. Usually two or three are fully-fleshed, and the rest rely on caricatures. I thought C. E. Murphy did a convincing job of bringing everyone to life without resorting to using black and white hats. Several of Margrit's relationships were messy, complicated, and convincing. I look forward to watching Margrit tangle with Tony, Janx, Daisani, Alban, and Grace O'Malley again. I grew to admire Margrit's stubborn and honorable nature. She's a modern day David who spits in Goliath's eye, but she does it with human cunning. Her profession as a lawyer for Legal Aid is perfect, and once she learns about the supernaturals around her, she decides to advocate for them as well. She's fairly hopeless when it comes to romantic relationships, but her friendships and her career come first, and I can respect that too. (I suppose my only criticism is that Margrit is a woman of color, but the lady on the cover looks white to me. I wish they'd gotten that detail right.) The plot was fluid and it had a few twi

C.E.'s great style with the grown-up Gargoyles you always wanted!

Published by Thriftbooks.com User , 14 years ago
As a huge fan of Murphy's Urban Shaman series, it was a moment of sheer delight to discover the new trilogy. I am just as pleased as I knew I'd be. Murphy's lead characters are extremely interesting and her supporting characters add great subplot to the story; her settings are at once familiar and slightly exotic; her heroine lives out a story line I always wanted to see myself. The book draws you in slowly and seductively. The more you know, the more you want to know about just what is happening. Murphy has a reader-friendly writing style; it is easy on the eyes while drawing spectacular images in the mind. If you can't lose yourself in this book you can't lose yourself. Heart of Stone shows more fluidity than her original series - her writing is filling out a bit, like a gorgeous teenager growing into an amazing woman.

Published by Thriftbooks.com User , 15 years ago
This entertaining book postulates that there are five 'old races' living (hiding) among modern day humans. The heroine of this book becomes entangled in their world and caught between them as they fight amongst themselves and drag humans into the foray. The characters make sense and are well thought out and developed, not something you see often in this genre. The first third of the book takes a while to get going, I mean, come on, we know that there is a gargoyle living in New York by reading the back of the book! The reveal takes too long, but then the book picks up the pace and it just flies from there. Her writing style is robust without being unnecessarily showy or irritating. There is much left unresolved by the end of the book- clearly leaving plenty of material for her trilogy- and some of the plot points are resolved as an afterthought, but I enjoyed the book so much I was willing to forgive this. There is a little bit of sexuality, but I would feel comfortable letting my sheltered little sister read this book. This author borrows heavily from the animated series 'Gargoyles'- but she does it well and builds upon that mythos and setting nicely.

One of the best storytellers in in the genre that I've read!

Published by Thriftbooks.com User , 15 years ago
The first book I read by C.E. Murphy was Urban Shaman, it was a great read. With the fantasy genre I'm often disppointed by how little the characters are developed (not that I don't still read a lot of Fantasy, I love the chance to glimpse a new world, even if it has to be imagined). Usually when I finish a book I just move on to any other book that catches my eye. With a very select few though I add the author to my watch list. C.E. Murphy was just such an author. I never feel as though it drones on, in fact it seems the perfect pace to me. Joanne Walker (the main charactor of the Walker Series, I don't say trilogy because I hope it doesn't end there) is believable and you can't help but identify with her in some way. She's a mechanic for the Police whose just return from an extended time off spent with her mother as she died. While landing from the air she spotts a woman being murdered. That's the start, but it isn't half the story. All I have to say is if you haven't read her other books, you're going to want to as soon as you finish this one. Heart of Stone starts a new series with Lawyer Margrit running through Central Park in the middle of the night. That night she meets someone who opens her eyes to a whole new world (literally). Its is a Fantasy Romance, but there's so much more to it including a serial killer to stop, a new world established underneath our own, a lot of character building done on her, and a tight nit group of friends, family and maybe enemies established which speak for a very interesting series and a great read. I'm not great at reviews, but if you've ever enjoyed a Fantasy novel (or are willing to open your mind to try one out) this would be a great book to start with.

Starts off with a jolt and doesn't let up

Published by Thriftbooks.com User , 15 years ago
Some might say Magrit Knight was looking for trouble when she ran through Central Park at midnight. Whatever her intentions were, trouble found her when a handsome blonde man approached her during a brief rest. After she got back to the apartment she shares with two friends, she discovered he was wanted in a murder that took place in the park right after their conversation. Then, he contacts Magrit again asking for her help--she's a Legal Aid attorney and he believes he's being framed for murder. Oh, by the way--he's a gargoyle. Alban Korund is one of the Old Races--gargoyles, selkies, etc who have lived among us in hiding for many years. If Alban wasn't enough, Magrit's also agreed to represent a selkie Mom and her child whose building is being destroyed against a prominent industrialist. Oh, and what about Grace O'Malley, who some say is a modern pirate? "Heart of Stone" is a great opening to the new Negotiator series from Luna. C. E. Murphy's really honed her craft as a mystery writer--she's got more hooks in this story than a bait shop. Chapter One gets your attention and the remainder of the text keeps hold. Magrit's the kind of tough heroine urban fantasy readers love. And she uses that toughness to fight for deserving people with good causes. There's definitely going to be some romantic tension in this story. Magrit's on-again-off-again lover is Tony, a homocide detective, who isn't entirely enthralled with her career or her clients. Then, there's Alban. Plus, already Ms. Murphy's touched on some less common races of fantasy origins: gargoyles and selkies. I'm looking forward to seeing what other types of beings she'll introduce us to in later novels.
Trustpilot
Copyright © 2022 Thriftbooks.com Terms of Use | Privacy Policy | Do Not Sell or Share My Personal Information | Accessibility Statement
ThriftBooks® and the ThriftBooks® logo are registered trademarks of Thrift Books Global, LLC