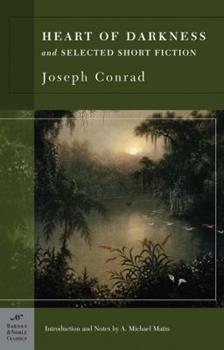 Heart of Darkness and Selected Short Fiction , by Joseph Conrad, is part of the Barnes & Noble Classics series, which offers quality editions at affordable prices to the student and the general reader, including new scholarship, thoughtful design, and pages of carefully crafted extras. Here are some of the remarkable features of Barnes & Noble Classics: * New introductions commissioned from today's top writers and scholars * Biographies of the authors...

A classic and amazing book!

Published by Dinora Aparicio , 6 months ago
I love Heart of Darkness, it’s is the best book I’ve ever read in college! Definitely recommend this book to any and everyone!

Published by Tatsmom25 , 1 year ago
This book did not meet the expectations of Very Good condition. It had marks and highlights throughout the book.

Published by Thriftbooks.com User , 12 years ago
Joseph Conrad is one of the greatest short story and novella writers, and this excellent omnibus has four of his best short works: "Youth," "Heart of Darkness," "Amy Foster," and "The Secret Sharer." All are essential for any fan or critic and an excellent place for the curious to start. However, all are available in many editions with widely varying supplemental material and prices. Readers must decide what edition suits their needs, but anyone wanting a representative selection with substantial supplementary material at a reasonable price could do no better. "Youth" is one of Conrad's most famous and acclaimed stories but is in my view the weak link. Like the better-known "Heart of Darkness," it is told by the character Marlow through another first-person narrator, but the plot is more akin to the symbolic, adventure-esque seafaring stories of prior Conrad. There is more traditional excitement and suspense than in most Conrad, especially later work, which may attract those who usually dislike his fiction. However, as nearly always with him, symbolism is the real point. As the title suggests, this is a tale about youth and all it stands for and arguably one of its best literary representations. Marlow recalls the excitement and elation he felt when he first captained a ship, fondly recalling exuberance and naïveté long since lost. However, as so often in such situations, nearly everything goes wrong, and youthful ideals are put to experience's harshly dramatic test. "Youth" is thus a sort of mini-bildungsroman, though Marlow's mad rush for the symbolic finish at the end of his story proper shows he learned very little at the time. However, he is now wiser and older, and retelling the old story brings several ambivalent feelings. He sees how much he has conventionally grown and learned but cannot help lamenting the loss of idealism that is possible only in youth and that steadily dissipates with age to the extent that it becomes hardly recognizable. Many will unfortunately relate strongly to this, and there is a good dose of Conrad's always beautiful prose and, very unusually for him, even a little humor. "Youth" would easily be most writers' masterpiece but lacks the scope, ambition, and style of Conrad's best works. "Heart of Darkness" is Conrad's most famous and arguably best work - not only one of the greatest short works ever but simply one of the greatest period. At once vividly realistic and profoundly symbolic, it on the one hand did much to expose the Belgian Congo's atrocities and on the other is a brilliant allegory whose precise meaning is still hotly debated over a century later. One would be very hard-pressed to find a text of such length with so many and various interpretations - nay, a text of any length; Shakespeare and a few other mainstays aside, hardly any other English language text has proven so malleable. It has been seen through lenses ranging from historical to psychoanalytic to seemingly everything between them - not

Published by Thriftbooks.com User , 12 years ago
Although English was not his initial language, I think that had it been, Conrad would have wielded much the same command of the language as Shakespeare in his day. But regardless of the writing quality, this is also a gripping and mesmerizing story. Perhaps some of this is because Conrad used to be in the same line of work as the main character, Marlow, who recurs in many of his works, but this story delves far beyond mere personal reflections, dealing with far more difficult and weighty issues than, say, Anna Karenina, and even many of the plays of Shakespeare; But, for me, the story is nevertheless as thrilling as any modern day mass-market novel, if not more because of its superior writing and philosophical quality. My favorite sections are Part 2, and the final scene, so don't give up early. I would give this six stars if I could. This is not my favorite edition, but the one I read first.

The best review ever

Published by Thriftbooks.com User , 14 years ago
An excellent collection of short fiction. Each tale is as compelling, as it is entertaining. Conrad is one of the best short story writers ever he is like a darker Stevenson who delves into the human psyche.

Published by Thriftbooks.com User , 14 years ago
I read this book for a graduate Humanities course. Joseph Conrad's Heart of Darkness, written in 1899 is a seminal work about the ills of colonialism, as well as a postmodern look at the subject of mankind. Conrad's book had a crucial influence on five important works of the twentieth century: J. G. Frazier's book The Golden Bough. Jessie L. Weston's book From Ritual to Romance, T. S. Elliott's poem the Waste Land, Joseph Campbell's Hero with a Thousand Faces, and Francis Ford Coppolla's movie Apocalypse Now, screenplay by John Milius, was based on Conrad's book. Another interesting fact is that this work was read by Orson Welle's Mercury Theater Players on the radio and was to be his first movie. After doing some work on it he abandoned the project to do Citizen Kane! I would have loved to of seen what Welles could have done with this story. Conrad's story is so riveting in part, because he himself served as a riverboat captain. High school teachers and college professors who have discussed this book in thousands of classrooms over the years tend to do so in terms of Freud, Jung, and Nietzsche; of classical myth, Victorian innocence, and original sin; of postmodernism, postcolonialism, and poststructuralism. Just a taste of the plot reels you in! Marlow, the narrator of Heart of Darkness and Conrad's alter ego, is hired by an ivory-trading company to sail a steamboat up an unnamed river whose shape on the map resembles "an immense snake uncoiled, with its head in the sea, its body at rest curving afar over a vast country and its tail lost in the depths of the land" (8). His destination is a post where the company's brilliant, ambitious star agent, Mr. Kurtz, is stationed. Kurtz has collected legendary quantities of ivory, but, Marlow learns along the way, is also rumored to have sunk into unspecified savagery. Marlow's steamer survives an attack by blacks and picks up a load of ivory and the ill Kurtz; Kurtz, talking of his grandiose plans, dies on board as they travel, downstream. Sketched with only a few bold strokes, Kurtz's image has nonetheless remained in the memories of millions of readers: the lone white agent far up the great river, with his dreams of grandeur,his great store of precious ivory, and his fiefdom carved out of the African jungle. Perhaps more than anything, we remember Marlow, on the steamboat, looking through binoculars at what he thinks are ornamental knobs atop the fence posts in front of Kurtz's house and then finding that each is "black, dried, sunken, with closed eyelids-a head that seemed to sleep at the top of that pole, and with the shrunken dry lips showing a narrow white line of the teeth" (57). I especially became interested in Joseph Conrad's Heart of Darkness from the movie Apocalypse Now. There is a scene in the movie that shows Colonel Kurtz's nightstand in his cave. T. S. Elliott's poem the Waste Land is one of three books on the nightstand. The other two are Jessie L. Weston's book From
Trustpilot
Copyright © 2022 Thriftbooks.com Terms of Use | Privacy Policy | Do Not Sell My Personal Information | Accessibility Statement
ThriftBooks® and the ThriftBooks® logo are registered trademarks of Thrift Books Global, LLC