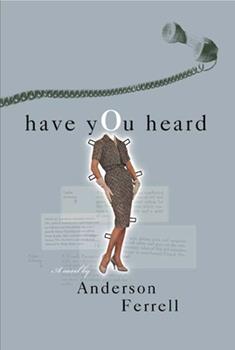 Have You Heard: A Novel

In the tradition of the great Southern storytellers, Have You Heard explores a small town torn apart by scandal. Author of two critically acclaimed novels, Anderson Ferrell is back with this sprawling, atmospheric tale of the American South. The attempted murder of a right-wing North Carolina senator throws a sudden media spotlight onto the alleged would-be assassin - Jerry Chiffon, who just happened to be sporting a red ladies' suit, a wig, and a...

On Being Different in Small Town America

Published by Thriftbooks.com User , 18 years ago
On day Jerry Chiffon from Branch Creek, North Carolina, dressed to the nines in a lady's red suit, "the kind favored by Nancy Reagan," with tasteful red, white and blue accessories, goes to a political rally at the State Capitol. Upon arriving, he pulls out a pistol and fires a round of shots at North Carolina's homophobic, racist U. S. Senator Henry Hampton. (Who on earth could Mr. Ferrell have based this character on?) This is just the beginning of Mr. Ferrell's tale of a small Southern town with all its pretentiousness, customs and secrets. The author understands completely the mindset of Small Town USA where everyone attends funerals, whether they knew the deceased or not, and take obligatory casseroles to the wake. And if there is anything unusual about the deceased-- say a father is buried in the same coffin with his deformed son-- then the funeral may have to be moved to the high-school auditorium to handle the crowds. Everybody knows everybody else's business, or at least they think they do. "No, sir. We never leave each other alone or to our own individual devices. I am glad to say I know everybody's business, and I am proud they know mine." But it is in this small town environment, where boys won't "let their mothers help them with a necktie," that Jerry Chiffon takes home economics in high school and instructs the local ladies about style. From him they learn many things: that you live in a house; you are "at home" and that you shouldn't wear too much jewelry to a funeral, for example. Bathrooms should be white; telephones, black. And you never have unlit candles anywhere.Mr. Ferrell has written a brilliant novel, rich in detail, and funny in the tradition of SPLENDORA but ultimately a sad commentary on being different. Jerry neither fits completely into the glitzy gay life of New York just before and during the worst of the AIDS epidemic nor in the little North Carolina town to which he returns although there is that sort of "let's not talk about it" mentality of the town, particularly among the women. In their defense, they stand by Jerry when he gets in trouble; but of course, the gossip mill works practically 24/7.This is not just Jerry's story. Maggie Labrette, his mentor, and Dr. Parchman Anderson, the local practitioner, figure prominently as well as the plot takes a surprise twist near the end of this novel.HAVE YOU HEARD is ultimately about being different, missed opportunities, love and courage, and in the words of the author, "the goodness of people." In describing the awfulness of the AIDS epidemic in New York and how people rallied around the dying, Jerry, in prison, remembers that "the world divided along the lines of those who are willing to help and those who are not. . . Finding the helpful was like finding you [his friend Maggie] and the others again. . ."Mr. Ferrell has created in Jerry Chiffon a character you will not soon forget. This is a fine book indeed.

Published by Thriftbooks.com User , 18 years ago
I was immediately drawn to this book by the hilarious voice of it's first narrator, Mrs. I. C. Lamm, a deliciously vain southern cousin to the anti-heroine of Robert Plunkett's "Love Junkie". (On opening up her home for a charity tour attended by the lower classes: "The things that usually happen with such people around did...Imagine women holding their spewing children over my front porch railing. My azaleas are still not speaking to me.") Mrs. Lamm steps back temporarily, and the story of Maggie Labrette and her discovery of Jerry-a sharecropper's child with a penchant for performing can-can dances with a fertilizer sack for a dress-is told through a succession of viewpoints, dipping back and skipping forward in time. As the tale of Jerry's harrowing journey to New York and back unfolds, the humor gradually gives way to a surprising, darkly detailed, and deeply affecting love story. "Have You Heard," is the work of a mature intellect at the top of his game. Anderson Ferrell not only knows how to craft a gorgeous sentence and a tightly woven narrative, he knows a great deal about love and loss, and that wisdom gives this finely wrought tale a rare depth.
Trustpilot
Copyright © 2022 Thriftbooks.com Terms of Use | Privacy Policy | Do Not Sell or Share My Personal Information | Accessibility Statement
ThriftBooks® and the ThriftBooks® logo are registered trademarks of Thrift Books Global, LLC