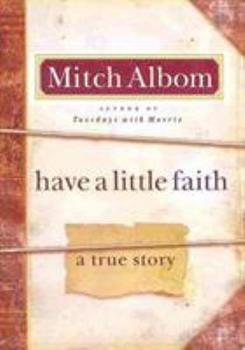 Have a Little Faith: A True Story

What if our beliefs were not what divided us, but what pulled us together? In Have a Little Faith, Mitch Albom offers a beautifully written story of a remarkable eight-year journey between two worlds -- two men, two faiths, two communities -- that will inspire readers everywhere. Albom's first nonfiction book since Tuesdays with Morrie, Have a Little Faith begins with an unusual request: an eighty-two-year-old rabbi from Albom's old hometown asks...

Published by CathyB , 3 months ago
I think this is my new favorite by Mitch Albom! I have always loved his style and his honesty, but this by far takes the cake on all of his books! I developed my love of Mitch Albom after reading my Mom’s copy of Tuesdays With Morrie, but this by far exceeded my expectations. I have continued the tradition and my Mom is now reading my copy of Have a Little Faith! Mitch Albom is such an amazing word smith I could actually picture each character exactly as he describes them, I can feel the emotions he describes, and I laughed and cried with him! If you haven’t already, put this on your list of MUST READS!!

Published by vabs , 3 years ago
I've never read a book by Mitch Albom that I didn't like but this one spoke to me. It's hard to believe it's a true story--truly inspiring.

An Agnostic Has Hope

Published by Thriftbooks.com User , 13 years ago
As an agnostic, a book titled Have a Little Faith had so little interest to me. But since Mitch Albom is my favorite author I figured how bad can it be and if I read it with an open mind, just maybe I'd be able to get something from it. Clearly, I made the right choice. Like all of Mitch's books, Have a Little Faith is brilliantly written. He captures the reader from page one and takes the reader on his journey with a dying rabbi (Reb) and a man who turns his life around (Henry). The only bond between the two is there faith in God -- one being Jewish and the other being Christian. In between a couple of other characters are introduced -- particularly Cass who has a beautifully defined role in the story. This book does not preach nor does it favor either religion. It merely suggests (as it does to Mitch) to look at yourself and perhaps refocus on the important things in life -- whether it be family, friends or faith. In a time where the world seems to be in a frenzy -- loving one another doesn't seem like a bad thing. Mitch: please keep turning out these masterpieces.

Published by Thriftbooks.com User , 13 years ago
"Will you do my eulogy?" This is the question that Rabbi Al Lewis asks Mitch Albom at the start of his first nonfiction book since TUESDAYS WITH MORRIE. And this question is the start of an eight-year relationship between Albom and the good rabbi. After years of going through the motions attending synagogue on high holidays with his family, Albom is surprised one day to have "Reb" tap him for the ultimate honor of delivering his eulogy when the time comes. As a child, Albom performed all the rituals of the Jewish religion by rote, all the while praying for a dog and rewriting the Ten Commandments to include "Honor thy older siblings" with his younger brother in mind. As an adult, he married a Christian and declared himself an atheist. But rekindling his relationship with the rabbi brought back a flood of memories from Hebrew schools and services. And Albom intersperses these often humorous childhood reflections throughout his book as he describes how his reconnection with the rabbi evolves. Strained, almost perfunctory visits morph over time into happily anticipated and cherished exchanges. As they meet over the court of the next four years, the "larger-than-life man of God" who stood at the lectern each week "was shrinking down to human size." Albom learned the history of the man who for so long had been a mysterious figure in the hallway at school. The Reb shares how he became a rabbi (in a line of many rabbis in his family), how he met and wooed his lovely wife Sarah, how they tragically lost a child, and how he nurtured and loved his congregation, flaws and all. He revealed to Albom all the nuggets he had gleaned from 60 years of ministering his people: that ritual IS religion; that "From generation to generation, these rituals are how we remain...connected"; "it is far more comforting to believe God heard you and said no, than to think that nobody's out there"; and (my personal favorite) the meaning of happiness is to "be satisfied," "be grateful." During this time, Albom met another man of faith, Henry Covington. Henry is the pastor at the "I Am My Brother's Keeper" ministry in Detroit, Michigan, a poverty-stricken church and shelter that ministers to the homeless and downtrodden. His path to his congregation and service couldn't have been more different from Rabbi Lewis's. Henry was a drug dealer, a criminal who one night found himself hiding behind a bush, holding a gun, fearing for his life (and that of his family) and praying to God to let him make it through the night. And when he did, Henry committed his life to helping others. He helped Albom get over his own prejudices and skepticism, and he shared his gems of faith: "You are not your past" --- words Henry knew all too well to be true. These two men --- so different in their experiences, their upbringing and their religions --- shared the common threads of faith and hope. And their convictions, their love, and even their senses of humor remind Albom of what it means to be "in l

Reading This Book Should be One of the Requirements of Life

Published by Thriftbooks.com User , 13 years ago
This is one of the only books that I've ever read that I couldn't put down! Really! If it had not been for the normal demands of life I would have finished it in one sitting. Instead, I had to put it down for an evening and spend the next day waiting to be able to get my hands on it to finish it. Mitch Albom is blessed with an incredible ability to capture thoughts and stories that touch the soul. Have a Little Faith is one of the books that should be required reading for life; particularly now with so much going on in the world around us. His conversations with two great, yet unknown, men of God are lessons in how to deal with the normal challenges and struggles of life. Don't read this book if you're afraid to feel the urge to shed a few tears of joys but read this book if you want to understand the answers to the questions that you ponder daily from the perspective of two men who have answered them from paths of life that, although divergent, were filled with experiences that captured the essence of what life is all about.

Get a Little Faith!

Published by Thriftbooks.com User , 13 years ago
I am in LOVE with HAVE A LITTLE FAITH! I've been a fan of Mitch Albom's books since TUESDAYS WITH MORRIE, and have been anticipating this - his first non-fiction book - since its release. In a nutshell, Albom profiles two people: a rabbi who he has been asked to write a eulogy for, and an inner-city convict turned pastor. Two very different worlds, two very different religions, but one strongly shared similarity : FAITH. This book REALLY made me think about my OWN spirituality and what faith means to me these days. The question Albom asks is: "what if faith wasn't what divided us, but what brought us together?" In a world where SOOO many wars are started in the name of religion and holier-than-thou attitudes prevail amongst so many different groups, it seems like all of our problems would be solved if only we could just say, "Hey, I have faith, you have faith...however we get there doesn't matter. What matters is that we both BELIEVE." Doing good for others is sometimes the greatest way to experience pure joy. If we all gave a little more of ourselves unselfishly, I do believe that peace would prevail. HAVE A LITTLE FAITH is REALLY a good read. Beyond the story and the characters (which in true Albom style, jump off of the page and into your heart), the message is deep. It's a book that will stay with you for quite awhile. You'll want to highlight parts and dog-ear pages like I did. It's found a home next to my other perennial favorites like THE FOUR AGREEMENTS, THE ART OF HAPPINESS and THE GAME OF LIFE. It's very, very good.

Have a Little Faith: A True Story Mentions in Our Blog 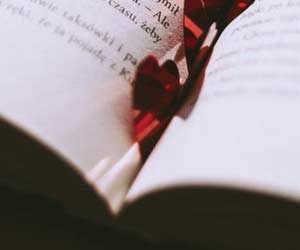 Aside from the obvious self-help category, books make life better in so many ways that it's hard to imagine existing without them...so we won'! Thankfully, we don't have to. Here are just some of the ways that reading books is as essential as, oh, breathing.