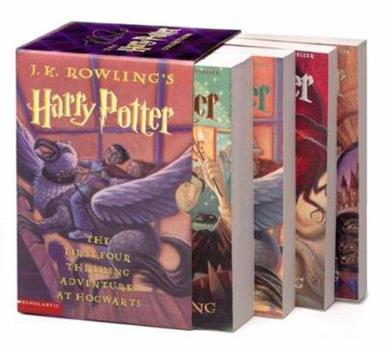 (Part of the Harry Potter Series)

Published by Tadeo , 1 year ago
Same as the previous reviewer. I ordered this expecting a box set and only received The Sorcerer's Stone, in Korean.

Not at all what it shows in picture

Published by Meg , 2 years ago
I ordered the box set, and got a single Harry Potter book that’s in a totally different laguage.

Published by Thriftbooks.com User , 20 years ago
I have read all four Harry Potter books. Though book 4 is much longer than the others, and does get a little boring at times, you certainly have to rate the whole set a 5 star effort by J.K. Rowling. The author's forte' is imagination and knowing how to spin an interesting tale out of her imagination. I like fantasies and am eagerly waiting for her next one to come out. In the meantime I have just finished reading another book that is actually true stories, but presented within the framework of fantasy, a book called "West Point: Character Leadership...." by Norman Thomas Remick that I want readers to know I really enjoyed a lot. It's not magic and wizardry like Harry Potter, but it also has a Harry, and I think is a good one for Harry Potter lovers before reading Book 5 of the Harry Potter series.

These books have it all

Published by Thriftbooks.com User , 21 years ago
I've just fininshed reading the first 4 Harry Potter books for about the 5th time through, and they're just as magical and affecting as they have ever been. Everything is in here: suspense, adventure, mystery, humour, danger. There's even some pretty satisfying paybacks. The characters are fantastic and fantastically realistic. There are bad people who turn out to be good guys and good people who turn out to be bad guys, just like life.I think the thing I like best about these books is the message that it's okay to be different - to be not "normal." I would very much have liked to have heard that message when I was Harry's age and in a stiff, prep school environment.These book value real thought. Much has been made of Harry's rule breaking, but only once in the series so far does he break a rule for arbitrary personal gain. Most of the time he makes a decision that what's right is more important than what's written. And you know what? Life's like that sometimes. I think it's great that kids are getting an example of how to do what's right even when it involves breaking rules. The Potter books also show that there are consequences for rule breaking. If not getting caught and getting a detention, then a spell going wrong and someone getting turned into a cat. This shows that when you make a decision to go against the rules that things may not go as you expected and you have to take responsibility for the outcome. Rowling's done a great job with these books! Long may she continue.

In Defense of Harry Potter

Published by Thriftbooks.com User , 21 years ago
These books are so wonderful and have given me so many hours of pleasure that I am actually shocked to see the controversy they have created in some circles...call me naive. I am over 40, the third oldest of 10 children and have been a voracious reader all my life. Look, people...kids are ornery. They do things...and so do adults, if we are being honest. I find the adventures Harry gets into uplifting because I know that nothing really awful is ever going to happen to him, with the exception of growing up! Ms. Rowling gives you that confidence pretty much from the beginning. You can find evil in anything. But Hogwarts even offers a "Defense Against the Dark Arts" class, where Harry learns to pull strength from within himself to ward off evil. HELLO! This is what we should be teaching our kids! So Harry and his friends don't do everything right, which is just fine with me because life isn't black and white. Here's a kid bouncing back from an abusive childhood of being taunted, ridiculed and locked in a closet. All this because of the FEAR-based muggle world in which he lives. He could have turned out a lot worse. GO HARRY!

Great Book! It's about time we let our kids have imagination

Published by Thriftbooks.com User , 21 years ago
I picked this book up, not for a child, but for myself. I am 41, and I loved it! I am all for teaching kids immagination, and so tired of hearing the people complain about what horrible things it will do to our children. Give me a break! Part of the problem now adays is that kids have been growing up too fast because people won't let them imagine, and won't let them have fun! Part of my fondest memories is that my parents made sure that I had an imagination, and encouraged it. I believed in Santa and the Easter Bunny (but I knew the religious difference - yes, it can be taught hand in hand), having my stuffed animals as friends when I felt alone, and playing pretend in general. This will be a tool to get the kids back to what they should be - kids! (PS - sorcerers and fairys have been around for a while, and I don't practice any spells! Remember Cinderella, Tinkerbell, the Sword in the Stone, and Sleeping Beauty, to name a few Disney movies?)Teach them how to imagine, and they will know the difference between real life, and play time!

Need to read it to be convinced

Published by Thriftbooks.com User , 21 years ago
I blew off the entire series thinking on my own that it was just another mainstream fad. I don't know why I started reading, but now I am convinced, this is excellent material for anyone child at heart, and arent we all? Yes I am saying that this is a cheerful set for all. Actually you cant beat this, I know all these books will become Icons of reading and remain so for a long long time to come.Also Recommended SB: 1 or God By Karl Mark Maddox
Trustpilot
Copyright © 2022 Thriftbooks.com Terms of Use | Privacy Policy | Do Not Sell or Share My Personal Information | Accessibility Statement
ThriftBooks® and the ThriftBooks® logo are registered trademarks of Thrift Books Global, LLC