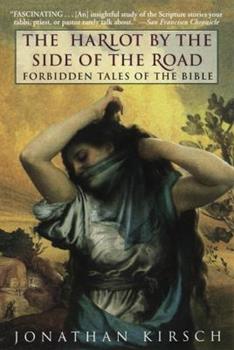 The Harlot by the Side of the Road: Forbidden Tales of the Bible

"The stories you are about to read are some of the most violent and sexually explicit in all of Western literature. They are tales of human passion in all of its infinite variety: adultery, seduction, incest, rape, mutilation, assassination, torture, sacrifice, and murder. . . ." Sex. Violence. Scandal. These are words we rarely associate with the sacred text of the Bible. Yet in this brilliant book, Jonathan Kirsch recounts shocking tales that have...

From the Shadows to the Light

Published by Thriftbooks.com User , 16 years ago
I expected this book to fuel my sketicism about Christianity and all the Book religions. To my pleasant surprise not only did I get an interesting and meaningful history leason but I was also rewarded with a deeper understanding of the Book and its teachings. The Book's stories come to life and its lessons became more meaningful.Thank you Mr. Kirsch for your courage in expressing this wealth of knowledge on such an emotional subjet. A spiritual person has nothing to be afraid of by picking up and reading this book. The Harlot will not corrupt but enlighten.

From the Shadows to the Light

Published by Thriftbooks.com User , 16 years ago
I expected this book to fuel my sketicism about Christianity and all the Book religions. To my pleasant surprise not only did I get an interesting and meaningful history lesson but I was also rewarded with a deeper understanding of the Book and its teachings. The Book's stories come to life and its lessons became more meaningful.Thank you Mr. Kirsch for your courage in expressing this wealth of knowledge on such an emotional subjet. A spiritual person has nothing to be afraid of by picking up and reading this book. The Harlot will not corrupt but enlighten.

Published by Thriftbooks.com User , 19 years ago
Jonathan Kirsch hits the nail right on the head when he speaks of the general populaces ignorance of what is actually in the Bible. Most people have some kind of fairy tale idea that the Bible is full of wonderful, pretty stories that always conclude with a happy ending. God is always just and fair, and his messages are easy to understand. People that have this opinion, and I know a lot of them, have no idea what they are missing. As the famous line from Kerouac reads, "that Bi-ble has some hot stuff". Man, does it ever.Instead of magical fairy tales, the Bible is one of the most brutal and violent books you are ever going to read. It's full of genocide, divinely inspired murder and human sacrifice, and some really complex sexual situations. To deny this is really to deny the true Bible, which is an amazing work of literature. That is not to say that these examples of extreme actions are without meaning; that is far from the case. Unlike modern literature which often uses murder and sex for no reason other than better book sales, the Bible delivers some deep moral pronouncements concerning a whole array of human situations. Using the horrible consequences of certain human action, the Bible can teach us a lot of harsh but important lessons.Kirsch delivers this message brilliantly. Using a very interesting way of getting his point across, Kirsch writes some good little novellas of the various Bible stories he proposes, helping the lay reader get a clearer grasp on what actually happens in the story. These fictionalizations are bolstered by the requisite Bible passages. After the novellas, Kirsch presents some great commentary on the various stories, bring in all kinds of varying opinions and interpretations. It really is fascinating, as some of the stories are so complex and unclear that no one in the centuries of Bible study can get a clear grasp on their true meaning. We are left with a whole host of intriguing but disparate interpretations that make for some good reading nonetheless. Kirsch does not go the route of cheapening the stories either. I was worried that this book would be some kind of sensational attempt to sell some books by showing that the Bible was really dirty and violent. That is not true at all. Kirsch does not dwell on the wild aspects of the story, he just means to explain what they mean to us today. Additional chapters deliver some good historical backgrounds concerning who actually wrote the Biblical stories, and the motivation behind many of the. A great example of modern Biblical analysis.

Published by Thriftbooks.com User , 22 years ago
Harlot by The Side of the Road was not only an interesting read that kept my attention throughout, it was a refreshing viewpoint which challeneged religious boundaries and censorship. The book focused on stories from the bible, well researched and explicated, which are not usually included in biblical texts. Kirsch has taken taboo subjects and explored them as part of human nature. I found that Kirsch retained a great sense of respect for ancient texts while trying to keep such sensitive subjects open to speculation and exploration. This was a great book and I highly recommend it.

You mean THAT'S in the BIBLE?

Published by Thriftbooks.com User , 24 years ago
In a society obsessed with religion, it is hard to imagine that, for most people, the Bible is virtually an unknown book. True, many American households have one gathering dust on the bookshelf, yet if the spine is cracked at all, it's generally for the purpose of finding out great-grandma's maiden name. The fact that the Bible is seldom read in its entirety in our day makes Jonathan Kirsch's new book, THE HARLOT BY THE SIDE OF THE ROAD (Ballantine Books, 1997; 378 pages), that much more of value, for in pointing out some of its "forbidden tales," the author might just send his reader back to the source. In HARLOT, Kirsch has picked out seven tales from the Hebrew Scriptures which set center-stage humankind in all its sinful glory. The accounts include rape, murder, genocide, and wholesale slaughter, all drawn from Holy Writ, and include such famous names as Lot, Moses, and even King David. Readers used to getting their Bible stories from Sunday services or Grolier adaptations will no doubt be shocked by what the Word of God includes. Yet Kirsch is not writing with the now popular Bible-bashing attitude of, say, a Lloyd Graham (DECEPTIONS AND MYTHS OF THE BIBLE). While he does accept modern-day theories as to the authorship of the biblical canon, his purpose is not to poke fun; rather, he extracts from each of the tales he recounts something of value, whether it be historical or practical. This makes the book good reading for both believers and unbelievers seeking to get a handle on some of the cultural mysteries of biblical times. Kirsch's format is instrumental in doing this. For each of the seven tales, he recounts the narrative in novelistic style, and provides detailed examinations of the various factors involved. This is particularly effective in his chapter entitled "Tamar and Judah," where he explains the concept of brother-in-law marriage, the status of women in patriarchal times, and the true "sin" of Onan (it's not masturbation). Extensive documentation from ancient and modern times is considered, though Kirsch never strays far from the biblical source.It's an approach that should please both scholars and casual readers alike.
Trustpilot
Copyright © 2022 Thriftbooks.com Terms of Use | Privacy Policy | Do Not Sell or Share My Personal Information | Accessibility Statement
ThriftBooks® and the ThriftBooks® logo are registered trademarks of Thrift Books Global, LLC