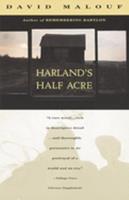 Born on a poor dairy farm in Queensland, Frank Harland's life is centered on his great artistic gift, his passionate love for his father and four brothers and his need to repossess, through a patch of land, his family's past. The story spans Frank's life; from before the First World War, through years as a swaggie in the Great Depression and Brisbane in the forties, to his retirement to a patch of Australian scrub where he at last takes possession...

A thesaurus is required

Published by Thriftbooks.com User , 19 years ago
The thesaurus is not needed to read this book, but to describe Malouf's work. There is certainly no single term that can encompass his superb writing abilities. "Opulent" might cover his descriptive powers, but fails to address the strength of Malouf's chronicle of Frank Harland. "Gripping" isn't appropriate to a life so realistically portrayed - with its tumultuous events mixed with the mundane. Artist Frank Harland is anything but mundane, however. Raised in a rural, hilly environment, Harland is buffeted by lasting poverty, overborne by deep loyalties to father and brothers, never losing sight of the meaning of "place." That place is the one-room house of his birth. No matter how far he strays from that locale, it haunts his life and his paintings. In the end, he confines himself to the "Half Acre" in solitary exile. What the thesaurus fails to convey for the reviewer, Malouf's own words will keep you embedded in this real life story.This early book presages why many awards are granted Malouf for his writing. He was the first winner of the IMPAC award, the richest in publishing. The story of Frank Harland captures the reader from the first page. His father, an indolent dairy farmer, imparted a sense of story in Frank from his earliest days. He applies his learning to drawing instead of text, giving a fresh image of his home and its people throughout his life. Affected by the powers experienced in the hill country, the various intensities of light and shadow, the wonder-generating storms that beset the hills, the flora and fauna encountered, he struggles to impart his feelings to his art. Using any available medium, Frank paints on wood, cardboard panels, paper or whatever is at hand. The work gains wide circulation, almost unknown to Frank. Success and fame are not his aim, however, but getting through life remains the dominant theme throughout this work. In the background, he remains beset by "place," which is translated into spending his earnings on enlarging his father's land holdings.Malouf's great strength is in characterization. Every person in this story is vividly depicted, Frank, father Clem, Tam the stepbrother and Phil the lawyer. Would you like these people? It's doubtful. Frank, caught up in his art, is slovenly, his various residences a chaos, his appearance ragged. Phil is hesitant, charmless and limited in scope. Little wonder he remains unmarried throughout his life. There is little to attract in any of these people. Still, Malouf manages to portray them sympathetically. His prose keeps you attentive, following their fates, no matter how distasteful their personalities might seem. It is Malouf's honed skills that keeps this book timeless.

Published by Thriftbooks.com User , 20 years ago
Generational Family Trees are often found at the beginning of Biographies. Mr. Malouf's, "Harland's Half Acre", is a novel so the Families are fictitious, however the complexity of the relationships are very real, so a pen a paper may help keep all in order. The Author is not a writer of clichés, and the people and how they relate are in no way contrived. There is some unusual movement of players, and they sometimes concur with the death of another key character, it may just have been me, however there seemed much to follow.This is the fifth work of the Authors that I have read, so I have by no means even reached the halfway mark in his work. Of the works I have read this is my favorite. This book is neither as complex as, "An Imaginary Life", nor as seemingly straightforward as, "The Conversations At Curlow Creek". The works I have read that were about the settlement of Australia were placed at the beginning of the earlier settlers history while this work shows the results and failures of the descendents of those pioneers.The artist in the book reminded me of another Author's portrayal of a painter in. "The Moon And Sixpence", by W. Somerset Maugham. The artist's personalities are very different, and the issues they struggle with differ as well. I make the reference as it may cause an association to the better-known work. Mr. Malouf's work is every bit as good a read.All of the attributes about the Author's work I have mentioned before I will try not to repeat, however in this work the manner with which he had his characters experience death was interesting to me. His writing of death and its dismantling of life is very well done, however the way he chose to deal with the actual instant of death was new as a reader for me. It occurs more than once, so I believe the note is something the Author wanted to make a point of. Death is hardly a new area, but as he has done in his previous books, he writes about aspects of what you believe you are familiar with and he brings a fresh perspective. His work is not derivative, it is unique as he takes a detail, a moment in time, and causes it to be a noteworthy event.A wonderful writer, I look forward to the balance of his work.

Published by Thriftbooks.com User , 21 years ago
David Malouf's Harland's Half Acre is by every standard a great book. Malouf has elected to deal the life of Frank Harland, a fictional Australian painter based loosely on real-life painter and recluse Ian Fairweather. Thematically, Malouf's book is comparable to Patrick White's The Vivisector, although Malouf's book certainly is a less demanding and far more beautiful read. As usual, Malouf's almost liquid prose is beyond reproach, and the central characters are more substantial than in previous works. Harland's Half Acre has not received as much acclaim as other novels by David Malouf, which is a great pity. The novel is not as grandly imagined as Malouf's masterpiece An Imaginary Life, yet it follows in the footsteps of Johnno, 12 Edmondstone St. and The Great World by painting an intensely personal picture of Australian history/memory.
Copyright © 2020 Thriftbooks.com Terms of Use | Privacy Policy | Do Not Sell My Personal Information | Accessibility Statement
ThriftBooks® and the ThriftBooks® logo are registered trademarks of Thrift Books Global, LLC