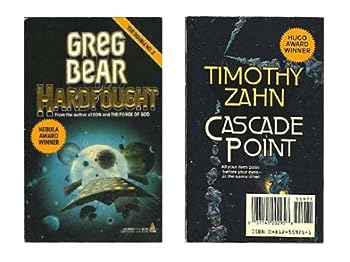 (Book #2 in the Tor Doubles Series)

by Timothy Zahn and Greg Bear

Together in one volume: two award-winning stories by two bestselling authors, providing double the excitement. Authors Greg Bear (Eon) and Timothy Zahn (The Last Command) provide non-stop,... This description may be from another edition of this product.

Hardfought (not by Timothy Zahn)

Published by Thriftbooks.com User , 19 years ago
Both these stories are pretty easy and quick to read, Zahn's Cascade Point being the easier one. Like most of Zahn's stories it takes a single sf idea - the "cascade point" at which you see all possible alternate realities at once - and explores it. I found the idea kind of interesting, but a little contrived.The other story, Greg Bear's Hardfought, blew my mind. At first the narrative is a little confusing, but once you get used to that it's okay. It deals with an interstellar war in the extreme future of humanity, and the ways our species has evolved and adapted to the war's requirements. I read this a few years ago, so I don't remember specific points too clearly, but I can remember the way Bear wrote it. Bear has never been interested in making his narratives straightforward or simple, either in the complexity of the plot or in the prose he uses, and this is no exception. Some people are probably put off by the narrative not being totally clear, but I loved it (and I'm sure that if you read it a little slower and think a little more, it will all make sense).

Published by Thriftbooks.com User , 20 years ago
Just Superb! The way Mr. Zahn writes as usual makes me wish for more. Now, the cascade point idea is one of the best in Sci Fi, clever and original. I only regret that the book is not as big as I would wanted it to be, but it makes for an excelent reading for those Sci Fi readers. Highly reccomended!

Um...Greg Bear wrote half of this title...

Published by Thriftbooks.com User , 21 years ago
Seems some of the previous reviwers overlooked the fact that there were two authors involved in this work. Although I like Timothy Zahn a lot, I'm a dyed in the wool Bear fan, and Hardfought is one of the few shorts (of any author) I re-read over and over again. Shoehorned into this story are commentaries on the consequences of total war, cloning, social changes over vast periods of time, political back-handedness, speciesism, and manipulation of popular culture. Plus ripping action and even some tepid sex! The open-ended ending appeals to me too...I'm sure the editors hated it. Another example of Bear's mastery. Oh, and Zahn's story was good too.

A great book, an astounding author.

Published by Thriftbooks.com User , 23 years ago
One of Timothy Zahn's firsts. Read the Conqueror's trilogy. Buy the single book, Cascade Point, and don't bother with Hardfought.

One of Zahn's better stories, one of Bear's mediums.

Published by Thriftbooks.com User , 24 years ago
This Tor double is truly an interesting combination of stories. Cascade Point by Timothy Zahn won a Hugo Award, and Hardfought won a Nebula Award. Both stories are novellas which is good for pace and keeps the reader interested enough to finish each story in one sitting. Cascade Point is the better of the two stories. It was an inkling of the great future novels to come from Zahn. However, I got the impression that Hardfought was a story that never made it to full novel status
Copyright © 2022 Thriftbooks.com Terms of Use | Privacy Policy | Do Not Sell My Personal Information | Accessibility Statement
ThriftBooks® and the ThriftBooks® logo are registered trademarks of Thrift Books Global, LLC