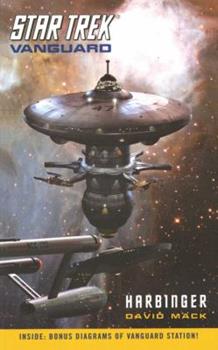 From the USA TODAY bestselling author of Star Trek ?: A Time to Heal , the start of a new epic in the era of the original series. Returning from its historic first voyage to the edge of the galaxy, the damaged U.S.S. Enterprise(tm) journeys through the Taurus Reach, a vast and little-known region of space in which a new starbase has been unexpectedly established. Puzzled by the Federation's interest in an area so far from its borders and so near the...

Published by Thriftbooks.com User , 16 years ago
Pocket Books has launched a new series of Star Trek books, set during the early period of Kirk's time. The series is Star Trek: Vanguard, and the first book, Harbinger is an excellent start. Written by David Mack, one of the premier authors of the line, it carries an interesting concept, some rather unique (at least for Star Trek) characters, and some wonderful plotting. It definitely leaves me waiting impatiently for the next book. Starbase 47, also known as Vanguard, is a station way out beyond Federation space, in a zone sandwiched between the Klingon Empire and Tholian space. Built very quickly, it also has a secret purpose, one which only a few members of Starfleet's hierarchy know. Captain Kirk is bringing the Enterprise back from the edge of the galaxy, after the events of the television episode "Where No Man Has Gone Before." The ship is battered, his friend is dead at his own hand, and Kirk just wants to get home and refit. He discovers that the Vanguard station is along their way home, and is much closer than limping back to Federation space, so he takes the Enterprise there. When he gets there, his suspicions are aroused by the reluctance of Commodore Reyes to answer his questions about why the station is out there, and he becomes determined to get to the bottom of what's going on. Let me start right away by saying that, while a lot of the description of the above was about Kirk, this is *not* his book. Kirk and the Enterprise are only in this book to do a "hand-off" to the crew and characters of Vanguard, much like the appearance of Picard in Deep Space Nine's pilot. This is the raw rookie Kirk, not yet the legend, and people don't kowtow to him (though he isn't above bullying his way in anyway). Reyes shoots him down quite quickly when Kirk begins demanding answers. I quite liked Reyes' character, as he has quite a few flaws, but he is loyal to his crew and to Starfleet, as well as harboring a secret or two of his own. I loved the scenes between Kirk and him, where Mack illustrates the differences between the two commanders. Mack handles the other characters brilliantly too, introducing them all in scenes that don't sink to "info-dump" level, instead having their initial scenes flow from the characters themselves. Pennington, the Federation News Service reporter, is having an affair with one of the officers on the Bombay (a ship assigned to Vanguard), whose husband happens to be a crewmember on the Enterprise. He's a reporter with a keen eye for a story, and a willingness to dig very deep if necessary. Throughout the book, Pennington's life goes from a great high at the beginning of the book to a deep low as events happen. By the time the inevitable happens and he begins to think his life can't get any worse, the reader has grown to care about him a great deal. He is probably one of the best new characters in the book, but he is not the only one. This crew is not your typical Star Trek crew. This is a time wher

Published by Thriftbooks.com User , 16 years ago
Another of the most anticipated and high-profile Trek books of the year is Vanguard: Harbinger, a pilot novel establishing a new crew of the Watchtower-Class station Starbase 47 aka Vanguard. Employing a judicious use of mystery combined with a descriptive prose establishing a great sense of place and time, Harbinger will probably end up as one of the top Trek novels of the year and very well may become an all-time personal favorite. One of the things that the novel does wonderfully right off the bat is in creating and laying out the setting of a brand new space station in 2265. The entire novel is put into the context of the pre-established Trek universe by having the station host the Enterprise after its trip to the galactic barrier in the second pilot episode. Kirk and company are the guest stars and in their segments, the book helps create more mystery about the Vanguard operation. Why was the station rushed into construction in this desolate expanse of space sandwiched between two hostile alien species? The discovery on Ravanar IV may not be the only reason. Inhabiting Vanguard is a motley crew of misfits and characters of dubious respectability. Commodore Diego Reyes is a stern and at times distant leader, who actually ends up spending much of the book as a co-conspirator in a nebulous operation possibly regarding ancient structures found buried on planets throughout the region. Also in on the plot is T'Prynn, the Vulcan intelligence officer and Jetanian, the Chelon Federation ambassador. I did have a minor quibble at the indifference shown towards one character's situation as a result of their actions in an attempt to quell a JAG inquiry. Perhaps that stems from T'Prynn's particularly cold demeanor. Some kind of recompense would have been appreciated by this reader, but maybe that's somewhere down the road. Much of the novel's most detailed character arcs actually deal with reporter Tim Pennington and thief Cervantes Quinn. Both are put through the ringer on the outskirts of the cover-up due to a space battle that happens halfway through the book between the U.S.S. Bombay and several Tholian cruisers. The pacing up through this battle is pretty quick and breathless. Afterwards, it slows down a bit to focus on Pennington's investigation. Quinn's direct connection with the story is actually at the very beginning. I was a bit curious as to the continued focus on him after that as it seemed to follow him on unrelated adventures (except obviously when he becomes a source for T'Prynn). The lack of details about the mystery never gets too frustrating, although I'd be a liar if I didn't say that I wish the book had just laid everything out on the table by the end. It would have just made for better closure for this book to know what all the subterfuge was about and then explore more later on. I'm guessing Starfleet wants to make use of the discovery, although I bet the events of the epilogue will change that. With a new setting, Harbinger do

Published by Thriftbooks.com User , 16 years ago
Penned by best-selling author David Mack, HARBINGER is an outstanding novel in its own right and the perfect introduction to a series with lots of promise. The story has all the necessary elements to hook you and hold you; a great concept and fascinating characters you want to know more about, whether or not you personally find them likable. As you read you begin to realize that there are a multiple mysteries being set up within the narrative, the most obvious being what's so special about the Taurus Reach. By the end of the first chapter you are already intrigued by the ambiguities surrounding the station and as the story continues to build, the more you read the more you want to know. Vanguard has a large cast of characters, both principal and supporting, most of whom are all trying to get to the bottom of what's going on, each for a different reason. Mack takes his time introducing the main characters, continuously building up an ever evolving picture of them as individuals. The mix of characters provides a nice balance. They aren't all Starfleet and they most definitely aren't what you'd expect. This approach to `casting' the series provides the reader with multiple points of view as events unfold. The various characters feel real in their responses and reactions to the events they find themselves caught up in. Some of the characters you'll like, some you'll loathe but they are individually and collectively a fascinating bunch. The time frame for Vanguard is firmly anchored by the use of a major point in Star Trek history, the Enterprise's disastrous mission to the barrier. While Mack does sprinkle in various homage's to the TOS era, and address some discrepancies seen on screen between "Where No Man Has Gone Before" and "The Corbomite Maneuver", he never allows the Enterprise crew to take over the story, they are very much supporting characters in this first novel. HARBINGER has it all; adventure, suspense, nail-biting action, character's you very quickly come to care about and the occasional twist to keep you on your toes. Based on what has been set up in HARBINGER for future authors to expand on, I have no doubt that the Vanguard series is going to be a sensational addition to the Star Trek universe.

Published by Thriftbooks.com User , 16 years ago
The worst thing about Star Trek Vanguard is that we have to wait until July 2006 for the next in the series. In "Harbinger," David Mack has taken an approach that had yet to be explored in the Star Trek mythos. Usually, a television show or book will focus on the captain, first officer, security officer, etc... But Mack has brought in a very wide array of characters, from Tim Pennington, a reporter for the Federation News Service, to Ganz, an Orion merchant-prince. This presents Vanguard to the reader on a much grander scale than any previous Trek incarnation. The writing is witty and sometimes laugh-out-loud funny, and familiar characters such as Captain Kirk and Mister Spock are written dead on. Hopefully, fans will be presented with something similar whenever the next television show rolls around. Vanguard is a book that has no problems appealing to all Trek fans.

Reads like a screenplay for a new series...a good one

Published by Thriftbooks.com User , 16 years ago
This book reads just like the pilot set in the original series era. Only in this one the characters are more interesting then the ones in recent live TV trek. Why wasn't this the subject of a new TV series. It doesn't go on about the original series Kirk,Spock and McCoy. It has to do with the star ships stationed there and the task of keeping a starbase going. Unlike DS9, which took place with non federation worlds, this one has starfleet ships and starfleet officers in each direction. I'd like to see more of these because we need them. If TV Trek isn't coming back in 3 to 5 years, at least we can read about them in the Pocket books universe of Star Trek books...
Copyright © 2020 Thriftbooks.com Terms of Use | Privacy Policy | Do Not Sell My Personal Information | Accessibility Statement
ThriftBooks® and the ThriftBooks® logo are registered trademarks of Thrift Books Global, LLC