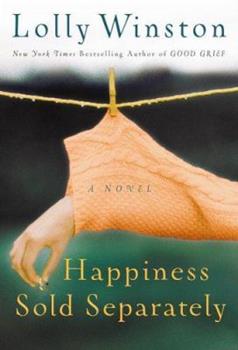 The bestselling author of Good Grief delivers her eagerly awaited new novel, a darkly funny and messy love story about what happens when people meet the wrong person at the wrong time and have to make it all right.

Laughing out Loud Even As I Cry

Published by Thriftbooks.com User , 15 years ago
I loved Winston's first book, GOOD GRIEF, so much I couldn't imagine she could follow it with anything better. But here it is: HAPPINESS SOLD SEPARATELY is the same wacky-humored, laugh-out-loud pleasure to read, in a story that was, for me, even more emotionally touching. I can't wait to see what's next!

Published by Thriftbooks.com User , 16 years ago
This book was such an enjoyable read that I cannot fathom how some readers said that it was more "depressing" than GOOD GRIEF. The primary couple in Happiness Sold Separately actually love each other but go through a Very Difficult Time following fertility treatments. Winston's attention to detail, her humor and her realistic characters made it hard for me to put the book down. Even "the other woman" is portrayed as human, with dreams and flaws like a real person. No one is comically evil or abnormally good, as in some novels. This is an excellent book that I recommend highly.

Published by Thriftbooks.com User , 16 years ago
Wow!! Lolly Winston proves that her wonderful debut GOOD GRIEF was no fluke with the excellent HAPPINESS SOLD SEPARATELY. It's been ages since I've read a book that I literally could not put down, having read all but the first 30 pages of this one in one sitting. I found Elinor, Ted and Gina to be wonderfully written characters. They are likable, frustrating, annoying, selfish, needy and sad. Very real characters with very real human emotions. I was definitely in Elinor's corner throughout the story. While her withdrawing from Ted was not a good thing, I understood what she was going through and felt she deserved better. Ted is the character I had the most problem with. Clearly he is a man who seems to want his cake and eat it too. He is unbelievably selfish and I was hoping Gina would eventually see this. I have one small complaint about the book and that is the character of Toby. He is a supremely annoying child and I never felt a great deal of sympathy for him because of it. I also was never quite sure what led him to believe Ted was such a great guy. Was it because Ted talked politely to him one night at a resturant? I needed a little more than that to understand the connection. Wintson does a great job of telling this story, and even throws a few curves just to shake things up. As for the reviewer who was unhappy with the "no resolution" ending, I'm sorry to say that that is often what life is like, sometimes there is no resolution and sometimes the resolution is not one we would like. Lolly Winston understands that and has written an excellent book to prove it. Enjoy!

Goes beyond the typical "he had an affair - now what?" type of novel

Published by Thriftbooks.com User , 16 years ago
The plot isn't that new. A couple, in crisis, and one of them (in this case, the husband) has an affair. But author Lolly Winston has the ability to make the situation much more complex than it first appears. All of the individuals (husband, wife, girlfriend) are deeply fleshed out and I found myself drawn to each of them, understanding how and why marital stresses, particularly infertility, added to the entire situation. Deep, rich, rewarding to read, leaving the reader with deeper insight about human behavior and motivations. A worthy effort by a talented writer.

Published by Thriftbooks.com User , 16 years ago
After two years of failed fertility treatments, Elinor and Ted Mackey have grown apart, becoming more like roommates than spouses. Elinor, a corporate attorney, likes to hide in the laundry room, where the cycling machines soothe frayed nerves. Ted, a podiatrist, spends his spare time working out at the health club--and seeing his fitness trainer on the side. Elinor is at a loss when she overhears Ted talking on the phone with someone named Gina. When the truth comes out, everyone involved has to figure out the next step. Still in some form of love with his wife, Ted promises to break up with Gina. Sometimes life intrusions make promises hard to keep. With Elinor's expectations of married life shattered, everyone involved will be forced to examine what is right and wrong, not just in life, but for them as individuals. Ted and Gina are given significant voice during this painful process. As a result, readers will be asked to look up on Gina with empathy, perhaps even a little understanding, in spite of her role as "the other woman." Each perspective is lovingly detailed, exposing the strengths and weaknesses of each character. All three of the main players are compelling. Rather than detracting from the flow and pacing of the story, the inclusion of all three characters is smoothly done. Ultimately, this is Elinor's story. As she moves through the roles of successful professional, to frustrated fertility patient, and finally to a new place in her life, Elinor will learn that happiness is never guaranteed, but "sold separately." This is a great rainy-day novel. Curl up in a chair in order to appreciate the wide range of emotions present in this extraordinarily normal story. It's a great peek into a situation little understood by those who have not endured it. Reviewed by Christina Wantz Fixemer 7/19/2006
Trustpilot
Copyright © 2022 Thriftbooks.com Terms of Use | Privacy Policy | Do Not Sell My Personal Information | Cookie Preferences | Accessibility Statement
ThriftBooks® and the ThriftBooks® logo are registered trademarks of Thrift Books Global, LLC