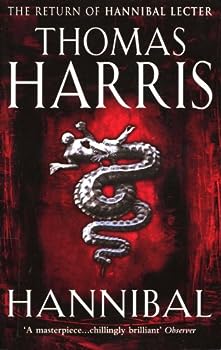 (Book #3 in the Hannibal Lecter Series)

#1 NEW YORK TIMES BESTSELLER * "Is it as good as Red Dragon and Silence of the Lambs ? No . . . this one is better."--Stephen King, The New York Times Book Review You remember Hannibal Lecter:... This description may be from another edition of this product.

Published by Book Lover , 2 months ago
I ordered this book for my son, and it came practically brand new.
Published by Thriftbooks.com User , 4 years ago
the book photo does not match the book I want to buy. Why is there no place online to ask questions that relate to the site, and not orders. I will not order the book if I am not sure I will get the right book.

Published by Thriftbooks.com User , 14 years ago
I enjoyed this book, a much more perverse tale than the excellent, though romanticized, film. The Hannibal of the book is not Anthony Hopkins at all, more like a Bela Lugosi type of Dracula origins. Count Lechter is not a modern man. In the film, I loved the tracking scene when the pickpocket Gnocchi trailed Lechter to obtain fingerprints on a silver bracelet. In the book, that sequence is more complicated with more characters involved, particularly the gypsy women who fail to get fingerprints once they realize they are dealing with the devil. I also loved Lechter at the gun and knife show, observing Donny Barber replaying endlessly a video of a deer hunt. Where Harris came up with Lechter's commands, asking Buck to "make him a parcel" of his purchases, I don't know but very funny. And of course the ending. I was stunned although I also saw it as a liberation for Clarice whose life otherwise would have been predictably dreary.

Published by Thriftbooks.com User , 17 years ago
Although this book has a totally different tone than the earlier ones of this series, it is hauntingly creepy and poignant.

Published by Thriftbooks.com User , 19 years ago
Hannibal is no "Silence of the Lambs" and it sure as hell is not a Hollywood movie. Sequel lovers will be disappointed but those who want to find progress and evolution in horror will find it here in Hannibal in all its bloody glory. Harris could have given us a remake of Red Dragon or Silence, but instead he goes the extra mile by shredding everything that the other two books stood for and simply slapping out a new raw type of horror story on a plate. There is nothing in this book which stops you turning the pages and anybody with some insight can see that every word, every sentence, every chapter has been gone over with a fine tooth and comb to give it the 'horror' masterpiece that Harris obviously had in mind. In fact that is what this book is - sheer urban horror. Hannibal is a quicker read than anything you can expect. If you want to know more about why Hannibal does what he does then you will find it here within these pages. There is less detective work this time round but then again look at the book's title and you will understand. This isn't about the FBI or Starling. This isn't about Serial Killers and their Nemisis - this is about Hannibal.The story is vulgar, obscene, violent and bloody. It takes us through the halls of blood-soaked dreams and into Hannibal's world where he walks freely painting his canvas a dark red while convincing onlookers that his interpretations of renaissance paintings are indeed the revelations of their ancestors deranged minds.... and they clap! This books plays with you and sticks with you.To cut a long story short this is a HORROR NOVEL and a bloody good one at that. It matches the Exorcist in this respect and does its best to distance itself from prejudged ideologies about what a follow-up to silence of the lambs should be. I give a nod to Harris! This is Horror evolution at its finest if you ask this reviewer.... and that is the best way to lap it up.Go read Agatha Christy or James Patterson if you really want another detective yarn.

Published by Thriftbooks.com User , 22 years ago
I've read a number of reviewer's comments on HANNIBAL, and I noticed a good deal of outrage at the absence of Clarice Starling (in the middle of the novel), and what becomes of her at the end. In my opinion, hard-boiled fans of SILENCE OF THE LAMBS missed the whole point of this book. It's not a reprisal of the mystifying Starling/Lecter relationship from LAMBS--that's been done. This book is exactly what the title promises--a whirlwind tour following Hannibal Lecter himself through Italy and the United States. This book offers insight into the madman himself, and I couldn't get enough of it.As I read HANNIBAL, a peculiar thing happened. I've always found myself fascinated with the gentleman/genius serial killer in a horrified sort of way. Who wouldn't be? We're shocked by serial killers, but constantly drawn to the gory details of their lives and activities. We're hungry for the gruesome. (Pun sort of intended.) But with HANNIBAL, I actually found myself cheering for the quintessential "bad guy," because this book makes you realize that there are worse monsters in the world. In HANNIBAL, they come in the form of Mason Verger, a wealthy livestock magnate whose sexual tastes run toward little children, and whom Lecter has left without a face, wheezing on a respirator; and a team of corrupt Italian "hit men" Verger has recruited to capture Lecter...with a huge bounty.From a writer's perspective, Thomas Harris handles this book with the literary precision of a master. His deft turns through various points of view--including an eerie and effective second person narrative that involves US, the readers, directly with the scene--is nothing short of genius.If you loved SILENCE OF THE LAMBS and you're looking for more of the same, you may be disappointed with HANNIBAL. The middle of the book abandons Clarice Starling and the FBI to take us to Italy, where a corrupt Italian police officer pursues Lecter like a bounty hunter. But if you begin this book without an agenda, and let Thomas Harris weave his magic inside your head, you won't be disappointed.
Trustpilot
Copyright © 2022 Thriftbooks.com Terms of Use | Privacy Policy | Do Not Sell or Share My Personal Information | Accessibility Statement
ThriftBooks® and the ThriftBooks® logo are registered trademarks of Thrift Books Global, LLC