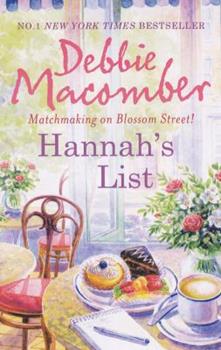 (Book #7 in the Blossom Street Series)

This description may be from another edition of this product. My darling Michael, I know this letter will come as a shock to you.... On the anniversary of his beloved wife's death, Dr. Michael Everett receives a letter Hannah had written him. In it she reminds...

Published by Thriftbooks.com User , 11 years ago
Ordered this book and received it the day after it was available! Read it in 3 days! Such a great, warm read. Like sitting with your best friend and chatting while drinking a good cup of hot chocolate! Debbie is incredible. The characters interweave so naturally and you feel like you are part of the story. I cannot read enough of Debbie! She is the best!! This book grabs your heartstrings immediately!

Published by Thriftbooks.com User , 11 years ago
I just loved this book. It warmed my heart and although I could guess the ending, it was nice to read a sweet love story where everyone wasn't jumping in and out of beds.

Published by Thriftbooks.com User , 11 years ago
Another warm/fuzzy book by Debbie Macomber. This is a peripheral book of the Blossom Street Series. Michael loses his wife (Hannah) to ovarian cancer and suffers unbearably through the first year. On the first anniversary of Hannah's death, his brother-in-law (Ritchie) hands him a letter from Hannah. It contains a list of 3 women she thinks will make Michael a very good love and wife. This is the story of his time with these 3 women (Winter, Leanne, and Macy). Very speedy and enjoyable book.

A second chance at love

Published by Thriftbooks.com User , 11 years ago
It's been a year since his beloved wife Hannah's death and Dr. Michael Everett still grieves for as much today as the day he lost her. He manages to get himself to the gym and to his practice, where he is a pediatrician, each day. But nothing else much matters to him. And then on the one year anniversary of her death, her brother Richie, who is also Michael's best friend, gives him a letter Hannah wrote months before her death. She asks him for one last favor - to not grieve for her forever. She wants him to find love again, to marry again and to have the family that they were unable to have. But Hannah takes it one step further and gives Michael the names of three women she feels will bring him happiness and love again. Winter Adams (from the Blossom Street series) and owner of The French Cafe is Hannah's cousin. She is a strong, professional woman trying to figure out where she and Pierre, her long time on-again off again boyfriend stand. Leanne Lancaster was one of Hannah's nurses who helped her through the last months of her illness. She has just gone through divorce, a decision she is now second guessing, and can empathize with Michael and his feelings of loneliness and grief as she is going through similar emotions over the loss of her marriage. Macy Roth is the wild card. She's young, impetuous, carefree, and counts her three cats, a stray dog, and a crotchety old neighbor as her family. She is habitually late, stubborn, terrified of love and everything that Hannah was not. Winter, Macy and Leanne each have issues in their private lives they need to settle before they can give romance with Michael a chance. But each of these women also has something different to offer Michael in terms of learning to find his way back to the land of living and to opening his heart to love again. Over the next few months Michael will spend time with each of them, getting to know them and often wondering what Hannah could possibly have been thinking when she picked each one. But most importantly Michael finds himself again, and with some help from his beloved Hannah, he also finds love. A moving story of three woman, each struggling to find their way in their own relationships and one mans struggle to realize that life does go on after loss and that you can find happiness again.

Debbie is the best

Published by Thriftbooks.com User , 11 years ago
I have all of the Debbie Macomber Knit Along books and have knit many things from her books. I have a friend that is expecting her first baby and will begin the baby blanket in Hannah's List very soon.
Copyright © 2020 Thriftbooks.com Terms of Use | Privacy Policy | Do Not Sell My Personal Information | Accessibility Statement
ThriftBooks® and the ThriftBooks® logo are registered trademarks of Thrift Books Global, LLC