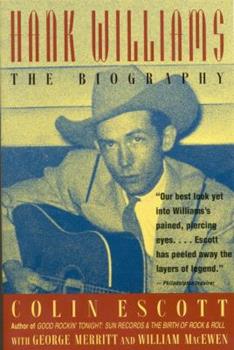 Based on years of research and interviews, this is a biography of Hank Williams, the father of modern country music. The book chronicles his career and a short life (he died at 29) in which he drugged and drank his way through two marriages and off the stage of the Grand Ole Opry.

A good followup to Roger Williams' SING A SAD SONG

Published by Thriftbooks.com User , 17 years ago
Except for Jesus Christ and Robert E. Lee, no other person has affected the conscious and unconscious mind of the average Southerner as has Hank Williams.Colin Escott's biography is less sentimental and more sensationalized than Roger Williams', but is it really more detailed? After all, you can only get so much material within a given number of pages. Nevertheless, every time you re-read this book, you pick up facts and suggestions you never noticed before.Of course, this is necessarily true with such a complex man, a genius in his field, and whose life and death were mysterious.My favorite anecdote concerning Hank is missing from both books and is related by his steel guitarist, Don Helms: Once, playing an outdoor venue, it began to rain on Hank and his band. Hank and the band retreated to a covered stage area, where they continued the show. Looking over the audience, who were getting soaked, Hank had compassion on his musical followers, and returned to the rain. "If you're good enough to listen to me in the rain, I'm good enough to play for you in the rain!" And he did.There you have it--a man with godlike qualities but yet a complete lack of pretense and who cared for his listeners like no one ever has. This is why you should pick up a copy of this for yourself and a copy to pass down to your grandchildren. We should never let this man's memory die.

Published by Thriftbooks.com User , 18 years ago
Wonderful biography of ole Hank! Not to harsh and not to patronizing. Editors notes were great. I couldn't wait to get to the next page. Even if your not a big reader, this book will hook you, and you won't put it down until its finished, then you'll read it again. Great pictures. The history of "ole Hank's" family, really explains why he was so great and had such a tragic departure from life. Great book. FIVE STARS to the author!!! Highly recommended reading.

Published by Thriftbooks.com User , 20 years ago
I have read several other biographies,over the years regarding Hank Williams,and folks I am here to tell you this is the one to read!The intense research that went into this work is well translated into the facts behind Hank Willaim's life.In fact the book does an excellent job of correcting many of the misconceptions and myths associated with Hank's life.One especially noteworthy example of this is the story behind Lon Williams-Hank's father.For years I had heard the story that Lon had died in a VA hosptal back in the early 30's,due to some old WWI wounds.In fact Hank contributes to this notion in the final lyrics of"The Log Train" when he alludes to his father's demise.The author's research establishes that Lon Williams actually lived til the early 1970's,surviving Hank,his sister Irene and their mother Lillie. Whether you are a scholar,a historian or a fan this is the book to have in your collection.

Only Hank Williams Biography Worth Reading

Published by Thriftbooks.com User , 21 years ago
This is the only biography of Hank Williams ( other than that by his daughter, Lycretia, and DAle Vinnicur) to come out in the last decade of so that doesn't reek of "only in it for the money." It is well researched (Mr. Escott managed to interview nearly everyone still living who knew Hank Williams, and the unedited interviews would probably make for a great book on their own) and, fortunately, puts the music ahead of the personal life while discussing the man. Also, there is little of the smugness that one frequently finds in books written about country performers, for which fans can be grateful. A well structured, readable book that contains enough new information to keep all but the most well-versed (bad joke, I know) Hank Williams fans entertained.

Published by Thriftbooks.com User , 21 years ago
Well-balanced and packed with good information about Hank Williams. I feel I know him now as well as anyone could. I highly recommend this book.
Copyright © 2020 Thriftbooks.com Terms of Use | Privacy Policy | Do Not Sell My Personal Information | Accessibility Statement
ThriftBooks® and the ThriftBooks® logo are registered trademarks of Thrift Books Global, LLC