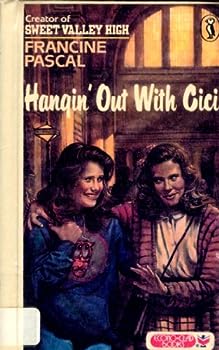 Hangin' out with Cici

(Book #1 in the Victoria Martin Series)

I can't believe my mother was ever my age. I think she was born a mother.... Now that she's a teenager, Victoria Martin expects freedom, good times, and maybe even some understanding from her mother.... This description may be from another edition of this product.

Published by Thriftbooks.com User , 18 years ago
My Mother Was Never A Kid is a funny, honest story told by Victoria Martin, a thirteen year old girl living in New York City in the 1970s. I think that this book is a good read, especially since it totally relates to a lot of people. Francine Pascal's present time writing style contributes to the actual-time essence that brings out the reality of it all. Victoria's experience going back to the twenties was rather far-fetched, but it adds up to the thrill it gave me reading this book. I think this book is great for all ages, even above thirteen. Once you start, you can't stop!

Hangin out with Cici By Francine Pascal

Published by Thriftbooks.com User , 18 years ago
Hangin' Out with CiCi Francine Pascal's Hangin' Out with CiCi is a must- read. It is a non-stop reader. It has a remarkable setting with memorable characters. This incredible setting takes place around a small town with brick houses and old candy shops and not to mention stores with two dollar shoes. At first she starts out with the today time period and goes back in time when her mother was a kid, and then she has to wonder am I ever going to get home? The main character is Victoria, which she is a teen just like you and I, that is doing everyday things. When Victoria gets in trouble at school and gets threatened to have to go to a private school, her world turns up side-down. While coming home from Pennsylvania Victoria goes back in time to 1944 in her Mother's hometown. She then finds a new best friend named CiCi. Victoria learns a lot threw her friendship with CiCi. This Book defiantly got me reading for hours. Hangin' Out with CiCi is truly an amazing story. Wouldn't it be neat to go back in time and learn about the family that you thought knew! Then while you were there with a family thinking I think I know them... but how? I am not really even alive? So you better watch out because the ending will just blow your mind! If you read this book it will not be a disappointment. This novel is for teenage girls that are looking for an exciting adventure or mystery that you could read over and over again. If you like this book then you might want to read some over books by Francine Pascal, like My First Love and Other Disasters, and also the great Sweet Valley High serious.

Some of Francine's Best

Published by Thriftbooks.com User , 18 years ago
We all probably know Francine Pascal best from Sweet Valley and Elizabeth and Jessica- "two blond, blue eyed twins with perfect size 6 figures who live in southern California". If you are under the age of maybe 18, you probably know her from Fearless a series and "Gaia, a girl born without the fear gene". Since no one has reviewed this book, I guess few people know about Victoria. This is a shame because Victoria is everything that Gaia, Elizabeth and even Jessica were not. Victoria has no special abilities. She isn't a black belt, or an algebra genius, she doesn't claim a size six figure or long sunstreaked blond hair. Victoria is thirteen and always in trouble. Realistically in trouble, she has no sensible look-alike to constantly bail her out. What Victoria has is a bratty little sister that constantly gets her in trouble and a mother that she doesn't think was ever a kid. (The book's title). This book is very realistic even though it is a little outdated. (The seventies). There is a fight scene on the subway between Veronica and her sister that is so surprisingly realistic that if you had had a little sister you would be nodding your head at it as you read. (Veronica's sister demands something that Veronica borrowed back and Veronica demands that her sister return Veronica's socks that she is wearing before she gets on the train. It ends with their mother screaming at both of them). Veronica finally gets in even worse trouble when she visits her cousin for a weekend and gets caught with illegal drugs. She didn't bring them, she didn't even want to try them, she just happened to be holding them when her aunt walked out. On the dreaded train ride home to her angry mother, she is somehow transported back in time. She meets her own mother, at her age, and is intially unable to recognize her. Later, she realizes that her mother was indeed a kid and she is able to contrast and compare their similarities and differences and get in some more trouble. This book, besides being grittily honest is also very well written. It kept me reading until the very end. I was happy to see it, and it's sequels back in the book stores. It comes highly recommended. Victoria, is once again, everything every other character Francine Pascal wrote about, is not. She is often awkward, self doubting and ridiculous. This book, despite it's light hearted, angst ridden tone of voice, grapples with some more serious issues. It's in a way, a slightly more sophisticated version of "Are you there god, it's me Margaret?" I believe this book was actually written by Francine Pascal, and not just planned out. (Francine didn't write all gazillion Sweet Valley books, but I think submitted something like various outlines to chosen writers). Back in the day, I wondered what she could have done with Elizabeth and Jessica, what kind of personalities they would have had, if she had narrated their stories. This book also has two other sequels. I only read one of t

Francine Pascal at her best

Published by Thriftbooks.com User , 19 years ago
These are NOT the generic romances that are the Sweet Valley High series."Hangin' out with Cici" has been republished, under the title, "My Mother Was Never a Kid". The two subsequent books in the series featuring Vicky, "My First Love and Other Disasters" and "Love and Betrayal and Hold the Mayo" have also been republished. All are available and I highly recommend them to people so they can experience a very different, fun, and refreshing writing style of Francine Pascal.This is a three-book series that I read years ago. To their benefit, they DO NOT follow the romance boilerplates of the Sweet Valley High series. The main character, Vicky, who is an absolute hoot to be around, travels to a different time, and gets to meet some new people her age. She has a smart mouth that gets her into some trouble and into some interesting situations. By the end of the story, she has gained a deeper understanding and insight into the adults around her.

1 part realism + 1 part fantasy = ONE GREAT READ FOR ANYONE

Published by Thriftbooks.com User , 21 years ago
This book is aimed at teens, but I say it's for everyone. (I still have my copy, tucked amid the more "grown-up" fare) Vicky's mom is giving her grief -- and then she gets blamed for something she didn't do! Bummer! Then, she enters this time warp, goes back to the 40s, and makes a friend who turns out to be her mom as a teen!!! EXCELLENT!! By thetime she gets back to her own time, she learns about her mom and about herself! This book is recomened to all mom's with daughters -- and everyone who is or has ever been a daughter. Imaginative, humorous, and moving, this book deserves 6 stars and it's a shame that it's out of print!!
Trustpilot
Copyright © 2022 Thriftbooks.com Terms of Use | Privacy Policy | Do Not Sell My Personal Information | Accessibility Statement
ThriftBooks® and the ThriftBooks® logo are registered trademarks of Thrift Books Global, LLC