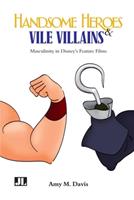 From the iconic Snow White and the Seven Dwarfs (1937) to Tangled , the 2010 retelling of Rapunzel , Handsome Heroes and Vile Villains looks at the portrayal of male characters in Disney films from the perspective of masculinity studies and feminist film theory. This companion volume to Good Girls and Wicked Witches places these depictions within the context of Hollywood and American popular culture at the time of each film's release.