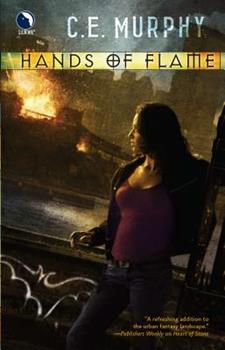 War has erupted among the five Old Races, and Margrit is responsible for the death that caused it. Now New York City's most unusual lawyer finds herself facing her toughest negotiation yet. And with her gargoyle lover, Alban, taken prisoner, Margrit's only allies--a dragon bitter about his fall, a vampire determined to hold his standing at any cost and a mortal detective with no idea what he's up against--have demands of their own. Determined to rescue...

4.5 stars - Action-packed finale, but is this really the end? I'm not so sure.

Published by Thriftbooks.com User , 13 years ago
Plot Summary: Nearly all the secrets are spilled in this excellent installment in the Negotiator Series. First, Biali brings Alban to a gargoyle tribunal, demanding satisfaction for Ausra's death, and an exasperated Margrit must defend Alban in a trial of contests. Janx is defeated, but he's still hanging around NYC causing trouble, and he finally calls in his last favor from Margrit. If she grants his wish, it would turn over control of the city to the djinn and selkies in a massive power shift. If that's not enough, the truth is revealed about how Malik died, and the djinn want to take their revenge out on Margrit. I stayed up late last night, desperate to know it all as Ms. Murphy ripped the lid off the action while the revelations poured out like the payload from a dump truck. Normally that would qualify a book for my top rating, but I do have a criticism, and it's that Margrit and Alban's relationship went no where new. In fact, that part of the story was kind of boring. They were there for each other, he propped her up a lot when she was weak and weary, but they had no real discussions or `couple time,' so their relationship went from providing a nice bit of tension to being a done deal. That's a shame, but not a fatal flaw. I inhaled the rest of the story with no other regrets, and the three novels that make up this urban fantasy series are all top notch in my opinion. Ms. Murphy revealed so many secrets that part of me is completely satisfied to have my questions answered, and the other part of me wonders if she'll be able to write more novels in this series. I hesitate to call this a trilogy because she hinted in her acknowledgement that she might come back to this world someday and write some more. It's an interesting approach to writing a series, and I commend her for crafting a trilogy with the potential for more. Nothing is worse than the never-ending UF series that go on into infinity without ever providing closure and revelation along the way. If Ms. Murphy picks up the reigns on the Negotiator series again, she'll need to craft new mysteries and inject some tension back into Margrit's love life. The reading order for this series is: Heart of Stone (The Negotiator Trilogy, Book 1) House of Cards (The Negotiator, Book 2) Hands of Flame

Nice end to the trilogy

Published by Thriftbooks.com User , 14 years ago
I'll admit that after reading the first book, I thought the series was going to be interesting, but not up to five star quality for me. The second book changed my opinion as I flew through the book. Now the third book continued the rush I felt from the second and ended with no real loose ends for the main characters, while leaving plenty of room for favorite second characters. The writing style is clear and easy to follow, dappled with humor, both dry, sly, and situational. Well-described action, emotion, and tension make this final installment end way too soon. I am satisfied with how Margrit, Alban, Janx, and other beloved characters end up (and am going to have to wait anxiously for another story in this world). Many secrets and stories that have been piquing my curiosity have been answered. I have no real complaints about this book. I just want more of this world. (If you're looking for more in this world, you can check out the author's website for information about a short story in an anthology and one online.)

Published by Thriftbooks.com User , 14 years ago
Five Old Races negotiator Margrit Knight has macro and micro worries. The big issue is war is imminent between the five Old Races and in spite of her vocation she feels helpless to prevent it. Making matters more complex for the lawyer is the micro concerns that are personal to her though not on the grand scale of the war. Her lover Alban Korund the gargoyle is incarcerated and her family and friends, so innocently human, are expendable pawns. As she tries to negotiate a peaceful settlement, obtain Alban's release and keep the troubles from harming her loved ones, she feels all alone. However, she has met three questionable associates who on the one hand want to help her, but also two of them seem to have hidden agendas that might prove deadly to Margrit. Janx the dragon is angry and acrimonious as he wants return to the soaring highest of his species running a major underworld criminal activity not live in a hovel underground and Eliseo Daisani the billionaire vampire feels slighted as he dreams of biting respect. Finally the NYPD detective thinks gang warfare on the streets of the city is out of control. Adding to Margrit's woes the paranormal pair appears to look forward to the war. The third Negotiator urban fantasy is a fast-paced, action-packed tale with spins and twists that make Broadway look like Lombard St. Margrit is courageous, perhaps too much so, as she dives head first into one dangerous mess after another with three goals to fuel her adrenaline: prevent the war, liberate her daytime HEART OF STONE lover, and keep her family safe even as she sees her world collapsing like a HOUSE OF CARDS. HANDS OF FLAME is an engaging tale that sub-genre fans will enjoy. Harriet Klausner

Thrilling Ending to an Original and Creative Trilogy

Published by Thriftbooks.com User , 14 years ago
I'm going through Old Races withdrawl right now...I can hardly believe the trilogy is over and I wish I had read this book more slowly! In my opinion "Hands of Flame" is the best of the three. There's lots of action and mystery right from the beginning, none of which lets up until the very satisfying conclusion (which leaves you happy but also desperate to know what happens next - several interesting events are revealed at the end that I want desperately pursued in the near future). This last volume deals with Margrit (a human woman) acting fully in the role as Negotiator between the bickering Old Races, whether she wants to or not. There are plotlines dealing with the rivalries between Alban and Biali (gargoyles), Selkies + Djinn, Janx (dragon) + Daisani (vampire), and various humans, in all the combinations you can think of. These, and other new developments (hinted at in the previous books - *children*) are resolved with a healthy mixture of suspense, mystery, and of course, action. The conflicts are very complex, but you don't get lost: you get completely immersed in the book and devoted to the world that Murphy creates, hence the withdrawl I am currently going through. I suggest you read the first two books in the series first; they just get increasingly better, and this last book is positively explosive. If the idea of gargoyles, dragons, selkies, djinn, and vampires all together in one series of books is interesting to you, then I can't recommend "The Negotiator Trilogy" enough. ***P.S.*** I LOVED that reference to the Disney cartoon "Gargoyles" on page 222. That show is one of the best animated series ever produced, and deserves to have at least a mention in a fantasy series that has gargoyles as its main mythological creature. It's hard not to imagine Alban as Goliath ;)

Perfect ending to a Perfect Trilogy

Published by Thriftbooks.com User , 14 years ago
The 3rd and final book (although I hope there are more to come) was perfect. All of my burning questions were answered and a few new ones replaced them but yet closure was still given. The book presented a Happy Ever After ending which I love! There was wonderful character developement in the book and the book was fast paced yet steady. There was so much happening in the book I could hardly put it down. Right from the start action takes off. I hope that more books will come there are alot of burning questions and storylines that could follow the old races. If you are a fan of the sci fi, urban fantasy, or paranormal romance genre this series is a must have!
Trustpilot
Copyright © 2022 Thriftbooks.com Terms of Use | Privacy Policy | Do Not Sell or Share My Personal Information | Accessibility Statement
ThriftBooks® and the ThriftBooks® logo are registered trademarks of Thrift Books Global, LLC