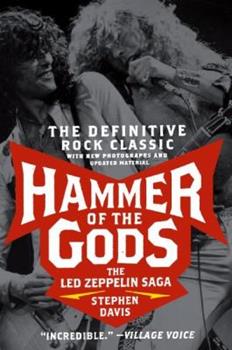 Hammer of the Gods: The Led Zeppelin Saga

The members of Led Zeppelin are major deities in the pantheon of rock gods. The first and heaviest of the heavy metal monsters, they violently shook the foundations of rock music and took no prisoners on the road. Their tours were legendary, their lives were exalted--and in an era well known for sex and drugs, the mighty Zeppelin set an unattainable standard of excess and mythos for any band that tried to follow them. They were power, they were fantasy,...

Published by Thriftbooks.com User , 14 years ago
I am a huge Led Zepp fan; that aside I really enjoyed this book. It gives you all the details about the band, their triumphs, and tragedies. It describes Rock and Roll excess like no other. It is never dull or dry, and is very well written. Probably the best book on Led Zeppelin. If you are a Led Zepp fan, then this is the book for you.

best book i ever read

Published by Thriftbooks.com User , 16 years ago
I read Hammer of the God's on a trip from Dublin, Ireland to the Shetland Islands, in the northern most part of Scotland, off the mainland. I bought it at an outdoor book sale in Dublin, just as I was preparing to leave for my trip. I am from NY and was studying in London at the time. And was on spring break, traveling throughout the UK. Most of my time traveling was spent on a train, traveling through many parts of Northern England mentioned in the book. I was 25 at the time and had been a "die hard" Led Zeppelin fan since I was 16. It was a good time for me to read the book because of where I was and the fact that I had loved the band so much already for so long. I had even seen them perform their Un-leaded tour the summer before at their meadowlands show in 1995. So I was ripe to read this book, and take in the details of a band and a time that I felt a special affinity for. Perhaps that is why I loved the book so much. While I was reading it, on the trains and ferries that took me to the Shetland Islands (I finished the book at a bar in Shetland) - I felt like I was there, experiencing that time with Led Zeppelin during the period they were like Gods. My favorite part of the book was the story of Richard Cole's friendship with Elvis' roadie - and how he got Robert Plant to meet Elvis - who was Plant's favorite all-time artist and rock mentor. Robert sang one part of the song and Elvis finished it - and it was a dream come true for Robert. I am now 35 years old - 10 years later - and the experience of reading Hammer of the God's is still very much with me. It was one of the most adventurous times of my life - traveling freely by train and ferry to lands I had never seen - reading a book about a band I had fallen in love with. It was the pinnacle of my relationship with Led Zeppelin's music and being a fan of the band. The band continues to this day to be my favorite band - their music still inspires me - and the book is to this day, the best book I ever read. Billy McGowan divebmc@sbcglobal.net

Led Zep was definetly NOT Houses of the Holy...

Published by Thriftbooks.com User , 20 years ago
Fantastic story! Even if this isn't all exactly true, it's highly entertaining and a classic read of a classic band. The early Yardbirds account and the hedonistic life led on the road were very informative to me. The big benefit to this book is Davis's capability as author of actually putting you in the 60's and 70's for Zep's hayday...I do see the previous reviewers point of a sort of "rush-through" of the final years, but the details leading up to that more than offset this minor critique. A real page-turner and hard to put down, especially if you're a Zep fan.

Published by Thriftbooks.com User , 22 years ago
I am a huge Zeppelin fan and I thought I knew a lot about them. I have all their albums, some other paraphenalia, and such. I also saw the VH1 Legends special on them. But this book blew all that c*** away. It gets up close and has quotes from band members, roadies, managers, etc. It explains the music industry and how Led Zeppelin dominated the music world with Peter Grant at the head. There is discussion about all aspects related to their music, from the meaning of the songs and lyrics to stories of their hardcore parties and also info about their private lives. It is the greatest book I have ever read, as it is told exceptionally well by Davis and flows well.

Published by Thriftbooks.com User , 23 years ago
An awesome book. Stephen Davis's unauthorized biography of the 70's biggest rock band displays both his wonderful storytelling style (and ability to fudge the truth) and just how great and weird a band Led Zep was. After reading this book, you'll get the picture why Zeppelin still to this day has an unmatched aura of chaos and mystery that is genuine and not cheesy in the way that many current bands try to project a fake and corny image (i.e. Metallica). Even Robert Plant has said the book has done much to enhance the band's legacy. One flaw of the latest edition of "Hammer" is that the new chapter takes away from the books previous ending (the classic Plant quote that ends the Live-Aid chapter). Still, this book covers all the bases from the inspiration for their songs ("Trampled Underfoot" was a takeoff of Stevie Wonder's "Superstition") to the infamous hijinx and backstage debauchery (a drunken Bonzo taking the mike at a Deep Purple concert and announcing to the audience that the guitarist "can't play for %#@!") that made Zep the nightmare of inn keepers around the globe.
Copyright © 2020 Thriftbooks.com Terms of Use | Privacy Policy | Do Not Sell My Personal Information | Accessibility Statement
ThriftBooks® and the ThriftBooks® logo are registered trademarks of Thrift Books Global, LLC