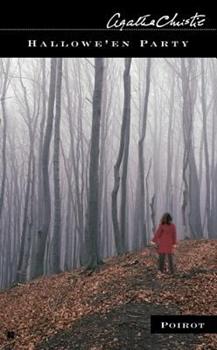 John Moffatt stars as the great Belgian detective in a BBC Radio full-cast dramatization. When a young girl is found drowned at a Halloween party after boasting about a murder she had seen, Ariadne Oliver, the famous crime novelist, sends for her old friend Hercule Poirot. But has Poirot one death to investigate--or two?

Published by Alondra , 1 year ago
I opted for a more vintage version and it did not disappoint from quality of the book to the actual plot. It isn't as Halloween as I thought it would be but still amazing!

The Plot for Murder

Published by Thriftbooks.com User , 16 years ago
Even though "Hallowe'en Party" was written later in Agatha Christie's career, and some might believe it to be somewhat of a letdown from earlier works, it retains all the trademarks of what make Christie's intricately woven, delightfully detected mysteries so endearing and timeless. With Hercule Poirot serving as the sleuth who steps in to solve the murder, "Hallowe'en Party" is quick-paced and filled with a cast of characters who seemingly all have something to gain, or hide. When a young teen is found murdered at a Halloween party, Hercule Poirot is called in by a visiting mystery writer. She is troubled by something that the girl had said during preparations for the party. The young victim claims to have seen a murder committed, and Poirot is quick to believe that she was murdered in order for that murder to remain unknown. He soon sets himself to the task of interviewing a wide cast of the town's inhabitants, raising questions about not only present events, but those in the past that just might be connected to the tragedy. When another murder hits too close to home, Poirot knows that he must convince the lawmen in charge that he has fitted the puzzle together correctly. "Hallowe'en Party" is plotted out to perfection; the solution, and the requisite explanatory chapter in which Poirot explains how he solved the crime at hand, is as ingenious as it is 'right before your eyes' if the reader is paying close attention to the clues. As always, Agatha Christie has fashioned a delectable mystery that has remained timeless in its plot (even if some of the language, and fashions mentioned for that matter, are a bit dated).

Published by Thriftbooks.com User , 16 years ago
One would think that by 1969, Hercule Poirot (created by Agatha Christie in 1920!) would have lost most of his trademark charm, but such is not the case. HALLOWE'EN PARTY (one of my favorite Christie mysteries of all) has an ingenious solution, the requisite "explanation scene" - and an elegiac quality which puts it in a class virtually by itself: this is fine literature as well as fine suspense. After nearly fifty years, Poirot and his creator are as brilliant as ever.

An Intricately Woven Plot By a Terrific Author

Published by Thriftbooks.com User , 17 years ago
Agatha Christie was a true mistress at presenting unique mystery plots and shocking conclusions! Although Miss Jane Marple is my favorite of her series detectives, Belgian detective Hercule Poirot is just as engaging and worth getting to know. His gentle arrogance and wit alone are well worth taking the time to try one of the instalments in this particular series, not to mention his brilliant deductive powers. "Halloween Party" is one of Christie's Hercule Poirot works, ranking up there with "Death On the Nile," "Murder On the Orient Express," and "The ABC Murders." The only minor complaint for me is that Captain Arthur Hastings does not appear in this book. This particular instalment involves Poirot's friend, mystery writer Ariadne Oliver, who is helping a friend prepare a halloween party for preteens of the country village. The party is a huge success until one of the girls, who has a habit of revealing more information than she should, is found drowned in the apple bobbing tub. She had told people earlier in the day that she had seen a murder being committed a year or two earlier. Could someone at the party have heard her and decided to silence the girl before she revealed what she knew? Ariadne Oliver enlists the help of Hercule Poirot, and his brilliant "Little Grey Cells" begin their work. This mystery has a chilling undercurrent, because Christie uses the horrific occurrence of a child being murdered, and Poirot must confront a truly sociopathic killer who will stop at nothing to remain in the dark. The audio verssion of this book is superb, and features John Moffat as narrator. He originally played Poirot on several BBC radio productions of the series, and does well portraying different characters. I thoroughly recommend the book on a long car ride or while working around the house. It will make the time go much faster. Agatha Christie presents readers with another gem! As with mostly all of her books, this one certainly does not disappoint. Please give it a chance. Happy reading!

Published by Thriftbooks.com User , 22 years ago
The story begins innocently enough - a children's Hallowe'en party. One of the adult guests is Ariadne Oliver, the famous crime novelist. One of the children at the party, in order to impress Mrs. Oliver claims to have seen a murder committed. No one takes any notice, dismissing her story, until the girl turns up dead at the end of the party. Horrified by the tragedy, Mrs. Oliver turns to her old friend Hercule Poirot for help, despite her belief that women should be running Scotland Yard! Poirot begins investigating and realizes that the child was killed in order to prevent discovery of another, much older crime. But raking up the past is dangerous as it can cause a killer to strike again...very chilling mystery, notable for its air of subtle menace and cruelty. Although the identity of the killer was fairly obvious midway through the book, I think Christie afficionadoes will like the psychological analysis of the motives for the crime, as well as of the criminal. Another good Poirot mystery.

Perfect for a fall reading, with a bewitching atmosphere.

Published by Thriftbooks.com User , 23 years ago
I feel this is one of Christie's very best, with both Hercule Poirot and Christie's mystery writer Ariadne Oliver adrift in a bizarre, unearthly setting. A perfect book to read as Halloween approaches, it has a truly bewitching feel to it, with a mysterious hanging garden constructed in a quarry as backdrop to the strange goings on. The characters, ranging from slightly odd children to menacing adults, add to the haunted feel of the book. In the midst of it all, Poirot's offended and suspicious air, and Oliver's battiness are quite amusing. Well worth the read. Come September, get yourself a copy of this, and of Tom Tryon's Harvest Home, and have a truly spooky, atmospheric autumn!
Trustpilot
Copyright © 2022 Thriftbooks.com Terms of Use | Privacy Policy | Do Not Sell or Share My Personal Information | Accessibility Statement
ThriftBooks® and the ThriftBooks® logo are registered trademarks of Thrift Books Global, LLC