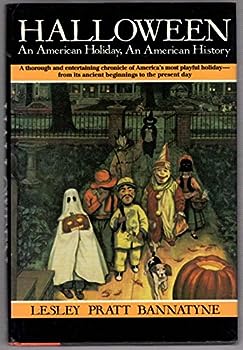 Discover the fascinating & diverse origins of the traditions, celebrations, & superstitions surrounding America's fastest-growing holiday in the only book that tells the whole story.

Published by Thriftbooks.com User , 16 years ago
This history is the best around for telling the story of Halloween in America in a fun (e.g., not academic) way. The distant Celtic past is not really the focus of the book, and its treatment here looks like a summary of sources available at the time this book was published (1990--Newer editions correct some common misunderstandings, I notice) The strengths of this book have to do with the folklore of Halloween, both in the colonies and throughout young America, and with the holiday's Victorian celebration. A Halloween History surveys life in the colonies and the sorts of beliefs that existed there to make an American celebration of Halloween possible, like ghost lore, traditions of some ethnic groups (Scots, Germans, etc.), religious backgrounds (All Saints and All Souls celebrations) and evidence of certain kinds of superstition: of magical black cat bones, listening at the crossroads to hear the future whispered in the wind, of wandering jack-o-lantern lights that can lead you astray, etc. Moving on through the 18th and 19th centuries, Halloween symbols are described in terms of folklore recorded both in the old world and the new so we can see the parallels--which was really fascinating for me. The Victorian chapter examines 19th-century mass media to translate what Halloween looked like and meant at the time when it emerged as a full-fledged American holiday. The book finishes with a decade-by-decade coverage of 20th-century celebration (up through the 80s, and publication). A treasure for Halloween fans in my opinion!

A wealth of information

Published by Thriftbooks.com User , 21 years ago
Bannatyne's book on Halloween is the best. Well-researched, absolutely packed with information and nuggets of fascinating lore on every page, yet the author eschews dry academic prose - it's like listening to an erudite friend explain his/her area of expertise. I highly recommend this book to anyone who wants to know more about such an interesting holiday. You really couldn't find a better, more comprehensive Halloween resource.

Published by Thriftbooks.com User , 21 years ago
This is a great book to get if you want to know more about Halloween. Not just the typical stuff, although that's there too, but where it came from and how poeple have been celebrating it for years. It's fun to read and has great information in it. I'm going to use it with my class so they know more about why we celebrate Halloween.

Published by Thriftbooks.com User , 21 years ago
I was extremely pleased with this book. Not only does it chronologically relate the history of Halloween, but it also describes the cultural contexts of its evolution. This book is not only well researched, but offers a very readable and entertaining look at the folklore associated with Halloween. My only criticism is the poor editing by the publisher or reviewers. Unfortunately, this book is replete with "typos," and I found one entire paragraph repeated on consecutive pages. This becomes annoying after awhile. However, the content and writing style are so good, don't let the editing stop you from buying it. Actually, I wish it were available hardcopy.

A very detailed accounting of Halloween in America!

Published by Thriftbooks.com User , 22 years ago
This book is just what its title suggests, a very good accounting of the history of Halloween in America. It lists the various immigrants who came to America and the folk customs and beliefs they brought that shaped the holiday. A history of each region of the country also shows how Halloween developed independently before a "national holiday " was formed. Well written and intruiging!My only negative comment of the book would be that some of the pre-American history of the book - that of the ancient Druid's Samhain is inaccurate. No other scholarly writing has ever substantiated that the Celts had a God of the dead known as "Samhain" or that they worshipped a Phoenician deity known as Baal. Belenos is a Celtic God name, but not a relation of Baal! Still, these are small glitches in an otherwise stellar book. I do recommend it to any folk historian or lover of the holiday!
Trustpilot
Copyright © 2022 Thriftbooks.com Terms of Use | Privacy Policy | Do Not Sell My Personal Information | Accessibility Statement
ThriftBooks® and the ThriftBooks® logo are registered trademarks of Thrift Books Global, LLC