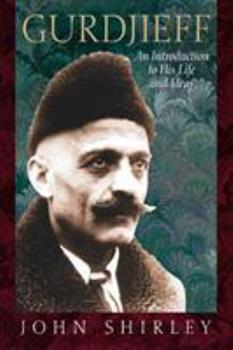 Gurdjieff: An Introduction to His Life and Ideas

A dramatic and literate introduction to one of the twentieth century's most influential and intriguing spiritual teachers. Born in the shifting border between Turkey and Russia in 1866, G. I. Gurdjieff is a man who would continually straddle borders-between East and West, between man and something higher than man, between the ancient teachings of esoteric schools and the modern application of those ideas in contemporary life. In many respects-from...

A Strong Short Biography of a Fascinating Man

Published by Thriftbooks.com User , 15 years ago
John Shirley has written an invaluable biography of the philosopher and mystic G.I. Gurdjieff. His writing is clear and incisive, and he gives the reader a very good sense of the man, "warts and all." Gurdjieff was a very difficult man to be around, according to those who were his students and companions. He relentlessly strove to shake people from their "dream" and get them to see reality. While he had many faults, he also had a compelling vision of what humans were and could become. I would recommend reading this book to anyone who wants to study Gurdjieff or Ouspensky in depth, before they take on the original material. Gurdjieff's writing style is very difficult, while Ouspensky is much clearer, conveying the same general orientation. Shirley's book will help clarify the distinctions, and give a good overview of the body of Gurdjieff's thought.

Published by Thriftbooks.com User , 17 years ago
The depth and complexity of Gurdjieff's teachings simply do not easily lend themselves to explanation. While there are many books on Gurdjieff which detail his complex philosophies, they require basic level of understanding of the Gurdjieff to understand them. Until now, that basic level of understanding could only be achieved through years of research. For the first time, this introduction is available in a single book. Gurdjieff: An Introduction to His Life and Ideas is the seminal stepping stone toward all other Gurdjieff teachings. The clarity and charisma with which Mr. Shirley wields his pen, place this work apart from all other explanations of Gurdjieff and his teachings. Most of these other books, while indeed enlightening, are a true labor to digest. Mr. Shirley's book stands in stark contrast to these difficult reads. Without eschewing detail, Mr. Shirley enlightens and entertains with his splendid introduction. Finally, a definitive background on Gurdjieff and his philosophies, you will not want to put down.

Excellent introduction and a great read!

Published by Thriftbooks.com User , 17 years ago
Author John Shirley has written a clear and compelling overview of the life, ideas and teachings of G.I. Gurdjieff. Shirley clarifies that this book is just an introductory piece, and points to other works, including Ouspensky's In Search of the Miraculous, which Shirley describes as the authoritative explanation of the Gurdjieff Work, insofar as a book can do justice to Gurdjieff's teachings, which are said to be experiential rather than intellectual. However I think he's too modest; he's clearly devoted subtantial careful research and consideration to his complex subject. I highly recommend this book - even if you've never heard of Gurdjieff, it's a great read.

On the other hand...

Published by Thriftbooks.com User , 17 years ago
This book knows the real Gurdjieff teaching (some groups out there are a bit mixed up). THe book has received very good reviews in Publisher's Weekly, Library Journal and elsewhere. It's objective, it's not promotional, and it criticizes Gurdjieff, evenhandedly, as well as setting out his very important teaching.

Published by Thriftbooks.com User , 17 years ago
The author manages to make some extremely complicated ideas as clear as any introduction can make them and does so in a highly readable manner. Whether one agrees or disagrees with the teachings of Gurdjieff, knows nothing of them, or is already acquainted with his ideas, reading this book will be a rewarding experience. Gurdjieff has always been a controversial figure, but he founded no religion and neither have his followers, but those with an interest in religion, spirituality, philosophy, or just looking for an interesting biography of a fascinating chracter.
Copyright © 2020 Thriftbooks.com Terms of Use | Privacy Policy | Do Not Sell My Personal Information | Accessibility Statement
ThriftBooks® and the ThriftBooks® logo are registered trademarks of Thrift Books Global, LLC