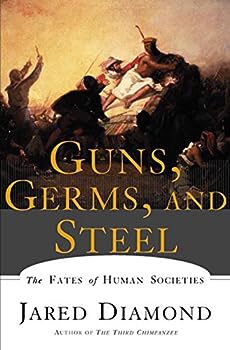 Guns, Germs, and Steel: The Fates of Human Societies

Why did Eurasians conquer, displace, or decimate Native Americans, Australians, and Africans, instead of the reverse? In this "artful, informative, and delightful" (William H. McNeill, New York Review... This description may be from another edition of this product.

Diamond as Monitor of Human Nature

Published by CarolABinkley , 3 months ago
I read "Guns, Germs and Steel", and "Collapse", several years ago. At the time I read them, Dr. Diamond appeared to me to know what he was talking about, though I found some discrepancies in his "tales of the truth". But after undertaking my own studies of history and human nature, I discovered Dr. Diamond lacks, shall we say, insight. A great deal of insight.

This was not the hardcover.

Published by Sam , 6 months ago
First time I got scammed. I thought I ordered the hardcover but it was not.

An opus of breathtaking scope worth multiple readings

Published by Thriftbooks.com User , 20 years ago
I read this book when it came out and saw Diamond on the lecture circuit when he plugged the book. I thought highly of it at the time. Seeing it still selling well four years later, I wanted to review it but felt a re-reading was in order. It was even better this time.Diamond's central rhetorical device is answering New Guinean friend Yali's questions why Europeans have so many more goods than New Guineans do. The answer is location, location, location: location with lots of domesticable crops; location with lots of domesticable animals; and location with lots of productive acreage having 'Goldilocks' access to the rest of the world -- strong enough for crop and idea diffusion but weak enough to prevent political unification. The book is twenty solidly written essays like his 'Discover' magazine articles. Linguistics, evolutionary biology, history, archaeology, anthropology, epidemiology, agronomy and paleontology are just part of the palette from which Diamond draws for his sweeping portrait of the most recent 13,000 years of human existence. There is hardly a wrong word written, a false step taken, or an error made in this exciting book, which delights in no small part by raising as many questions as it answers. Diamond knows a lot about a lot of things, and provides many an aha! moment. He also asks interesting questions about some things that neither he or anyone else knows about, and those questions are as interesting as any of his answers. He answers questions like: How did Africa become black? How did China become Chinese? and Why aren't Australia, New Guinea, and Malaysia Polynesian? One may not like the answers, but he takes a great shot at them, and I relish his doing so. He asks why proselytizing religion (Christianity and Islam) were driving forces for conquest among Europeans and West Asians but not Chinese. He also relates several interesting bits about his extensive field work (as an ornithologist) in New Guinea. The best page of the book is page 87, figure 4.1, "Factors Underlying the Broadest Pattern of History." The entire book is spent explaining that diagram, which is itself an answer to What are the proximate, intermediate, and ultimate causes to history's broadest pattern? I would modify his ultimate factors to be geography (adding carrying capacity to his east/west axis) and, more controversially, co-evolution between humans and large animals (with respect to their availability and behavior). I am also surprised that he did not cite the island-area effect in species or cultural diversity. But perhaps that would have been gilding the lily. There is nothing in the author's framework that precludes a change in where the most goods are today. He notes carrying capacities and access have changed radically over the last 13,000 years, shifting the balance of power from time to time. 200 years ago, for instance, China had the most goods. 200 years from now it may again.If you like history, evolutionary biolo

A new view of where the fertile ground is found...

Published by Thriftbooks.com User , 21 years ago
GUNS, GERMS, AND STEEL is a persuasive discourse of competitive plausibility regarding the challenging question why population groups on different continents experienced widely divergent paths of development. Contrary to the voluminous objections cited in the many of the reviews below, Professor Jared Diamond, clearly an enthusiastic proponent of environmental determinism, presents a set of premises consistent with evidence provided from a wide range of disciplines, but he does not attempt to answer the question of genetic diversity, including differentiated intelligence, among racial groups as many reviewers have inferred. If anything, implicitly, the author appears to support promulgations of differentiated intelligences; he sets out to demonstrate intelligence was not the root cause to Eurasian dominance.On at least two occasions Diamond, without equivocation, stated he found on average the New Guinean to be more intelligent than the average European or American. He was prompted to undertake this investigation as a result of a question posed by a New Guinean friend - Why white people developed so much cargo (material goods) and brought it to New Guinea while the indigenous had so little. Diamond summarized his findings as follows: "History followed different courses for different peoples because of differences among peoples environments, not because of biological differences among people themselves." Beginning 13,000 years ago, the author illuminated the conditions or circumstances that may have facilitated growth for some groups and inhibited the same for others. Diamond accepts the out of Africa theory for the dispersion of Homosapiens to the other continents (for purposes of his treatise Europe and Asia are indivisible), and like the old axiom of real estate, the importance of location, location, location becomes readily apparent. For Diamond, food production is the ultimate cause of variable rates of development for different peoples. He illustrates how the abundance of wild plants subject to domestication and availability of large mammals served as immediate factors to transition from hunter/gatherer bands and tribes to sedentary agriculturally based chiefdoms and states. Diamond lists what he proposes as proximate causes to European dominance:1) Germs - based on close proximity to domesticated animals, immunities were developed infectious strains Europeans would carry to other areas, resulting in the decimation of non-immunized populations. In turn, those groups had few autochthonous diseases that would affect the invaders. 2) Invention of writing- relatively sedentary lifestyles facilitated devotion of more time and effort to the creation of methodologies to control and coordinate commerce. These systems eased transfer of information among society members, and had further implications to the establishment of hierarchical political organization.3) Axial orientation of the different continents - east/ west orientation was conducive to tr

How geography shaped history. Or did it?

Published by Thriftbooks.com User , 21 years ago
With so many reviews already available, there is no need to repeat main arguments of this extremely interesting and well-written book. I'll rather concentrate on several of the most controversial issues.It is impossible to write a comprehensive treatise on world history, which will not induce attacks on political and cultural grounds. Some critics blamed J. Diamond for advocacy of pure geographic determinism, that "culture doesn't matter" and so on. I think it is unjustified. He considered foremost the time before and during emergence of agricultural and, consequently, sedentary societies, not today's civilizations. When human population consisted of small bands and, later, tribes, their development was determined by environmental factors. Indeed, evidence from all continents suggests similarities in the emergence of domesticated plants, agriculture, and village life, starting about 10.000 years ago. The difference was in speed of this process - faster in places of benign environment, where food resources allowed denser population, slower in more adverse areas. As human societies grew in complexity and technological and cultural sophistication, more nonlinear interactions and feedbacks emerged. Then geography had likely to become less of a decisive factor, at least in a relatively straightforward way described by J. Diamond.Moreover, history of the last few thousand years didn't resemble anything like the linear ascendance of the Western Europe. Western civilization achieved its dominance right at the moment when advances in ship-building and navigational technology brought the era of "great geographic discoveries" starting in 1492, which led to colonization of much of the world. Had seafaring been more developed before, during the Islamic dominance of several centuries earlier, or had China not scrapped its fleet and long-range exploration plans in early XV century, the world history of the last five hundred years could be very different.Some readers took issue with the author's statement that "average Guinean is probably smarter than average westerner". It is indeed highly debatable, even with the notion of "smartness" very different for different people. However, if one puts aside cheap chauvinism, one can see that there is something to this statement. A Guinean lives in a very diverse natural environment. He constantly needs to actively process (in contrast to, say, watching TV) large amount of information relevant to his essential survival and well-being. Another reason is that the Darwinian "survival of the fittest" mechanism still works in tribal New Guinea, while amenities of the modern consumer society allow procreation of relatively unattractive, inept and stupid people.Primary enabling factors of early civilization developments was the availability of domesticable plants and animals. Interestingly, the role of animals, as follows from the author's discourse, was much greater in this respect. Indeed, domesticated plants number many hund

Guns, Germs, and Steel: The Fates of Human Societies Mentions in Our Blog

Back to school time means beach reads come out of your bag and textbooks go in, but that doesn't mean the fun is over. While we (obviously) embrace all things learning and reading (because books), even we have to admit that some textbooks are a bit, um...dry. To ease the transition, here are 22 alternative academic titles that are entertaining, practical and, well, educational.