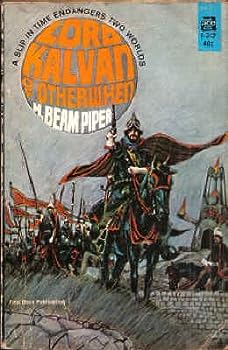 This description may be from another edition of this product. Eligible for Amazon's FREE Super Saver/Prime Shipping, 24/7 Customer Service, and package tracking. 100% Satisfaction Guarantee. Text pages show modest aging/yellowing. Has some scratches and a crease...

A modern man versus the god of gunpowder!

Published by Thriftbooks.com User , 16 years ago
Calvin Morrison is a Pennsylvania State Trooper who suddenly finds himself lifted out of his (our) world, and deposited on a parallel Earth. In this other Pennsylvania he finds a small kingdom of bearded primitives who appear to be on the losing end of a war of conquest. The locals have so little gunpowder compared to their enemies because the secret of making it is controlled by a corrupt religious order, Styphon's House. Calvin, a student of military history, finds himself proclaimed Lord Kalvan, and given the job of rescuing a seemingly hopeless situation. This book is very well written, and the action is gripping. I've already read this book three times, and it gets better each time. For those interested, there is a sequel to this book, it is Great King's War by Roland Green and John F. Carr.

Published by Thriftbooks.com User , 20 years ago
As a lifelong fan of time travel and alternate timeline stories, I first read this yarn when it was serialized (as "Gunpowder God") in ANALOG in 1964. I came across it recently at a university book sale and decided it was time to reread it, and I wasn't disappointed. Calvin Morrison, a Korean War veteran and the son of a minister, is a corporal in the Pennsylvania State Police (an organization for which Piper evidently had a high regard). While preparing to rush a bad guy holed up in a farmhouse, he's sideswiped by a passing Paratime Patrol transtemporal vehicle and gets bounced into an alternate Pennsylvania countryside where the Aryans of India went east instead of west, occupying what did not become China and then crossing the Pacific. Morrison is extremely adaptable -- it apparently takes him only an hour or so to accept what's happened to him and that he's not going back to his own world -- and quickly finds himself "Lord Kalvan," chief advisor and war leader to Ptosphes, Prince of Hostigos. All in all, this is a delightful exercise in military and geopolitical fantasizing . . . though it seems odd that people who get scooped up willy-nilly and dumped in ancient Rome, or wherever, always seem to possess all the political, historical, and technical knowledge to set themselves up nicely. Of course, if the displaced person were an overweight fries-cooker at Burger King, or a Mary Kay saleswoman, there wouldn't be much of a story! This is by far the best (and longest) of Piper's Paratime stories. If you liked Sprague De Camp's _Lest Darkness Fall,_ you'll love this one!

Published by Thriftbooks.com User , 21 years ago
Cpl. Calvin Morrison of the Pennsylvania State Police goes out to arrest a killer, stumbles into a lateral time machine, and falls suddenly into the feudal princedom of Hostigos, which is not in another world, but right in the middle of Pennsylvania. Hostigos, ruled by a benevolent prince with a beautiful daughter, faces the short end of a war of extermination. Morrison has a chance to display his leadership ability, utilize his knowledge of military history, rescue the princedom, and wed the princess (who could never be mistaken for the stereotypical damsel in distress). But can he do it before he is hunted down by the Paratime Police? He did, after all, manage to shoot a Paratime Policeman when he stumbled into the lateral time machine.Piper explores the ramifications of alternate universes and parallel time lines, and makes good use of his knowledge of Renaissance military science in crafting a fast moving, entertaining novella. He should have written a novel.

Great book that calls for a series.

Published by Thriftbooks.com User , 23 years ago
An exciting treatment of alternate history, this book and its sequel by Green & Carr are the start of a great story that begs for continuation. The main characters call for sympathy, although somewhat two-dimensional supporting roles detract from the story. A modern man in a feudal society makes great upheavals in the life of all around him as he battles a religious order with a gunpowder manufactoring monopoly.

Published by Thriftbooks.com User , 26 years ago
Originally appearing as a short entitled "Gunpowder God" in the November 1964 _Analog_, this story is one of the first "guy in modern times suddenly appears in medieval life" stories--and it isn't hackneyed or horrible about it. Our hero here is a Pennsylvania State Trooper, the world has no magic powers, and it's at a real and breakneck pace. It's good stuff, and I'm happy to see it exists in all its benevolent obscurity. Piper's "Paratime" series involved what would happen if one world got wind of the existence of all the other parallel universes, and had cops policing them
Copyright © 2020 Thriftbooks.com Terms of Use | Privacy Policy | Do Not Sell My Personal Information | Accessibility Statement
ThriftBooks® and the ThriftBooks® logo are registered trademarks of Thrift Books Global, LLC