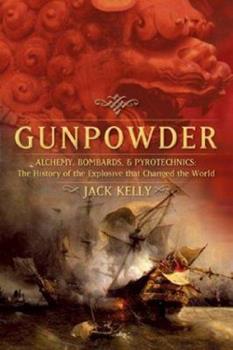 Gunpowder: Alchemy, Bombards, And Pyrotechnics: The History Of The Explosive That Changed The World

When Chinese alchemists fashioned the first manmade explosion sometime during the tenth century, no one could have foreseen its full revolutionary potential. Invented to frighten evil spirits rather than fuel guns or bombs-neither of which had been thought of yet-their simple mixture of saltpeter, sulfur, and charcoal went on to make the modern world possible. As word of its explosive properties spread from Asia to Europe, from pyrotechnics to battleships,...

A simple chemical that changed history

Published by Thriftbooks.com User , 13 years ago
I read 'Gunpowder' some time ago which, in some cases, is the best way to review a book. Smooth writing and catchy phrases usually disappear from the mind after a day or two, more important concepts last longer. Kelly's book is more informational than a page-turner. His basic premise that the invention of gunpowder--no matter who actually invented it--was one of those pivotal discoveries that changed history inexorably and for all time, stands as a certain truth. Perhaps like other pivotal discoveries--fire, the chipped stone handaxe, the atlatl, the bow and arrow, the shovel, the wheel, the screw and many, many others, the discoveror [s] have disappeared in history. Still, it was discovered, probably quite by accident, and we are all both its beneficiaries and victims. Kelly did a good job of emphasizing something that all of us should have known anyway...but didn't. Ron Braithwaite, author of novels, "Skull Rack" and "Hummingbird God", on the Spanish Conquest of Mexico

Lively technology of celebration and destruction

Published by Thriftbooks.com User , 17 years ago
As a boy, I wondered why my attempts at making gunpowder failed so miserably--I knew I had the ratios of saltpeter, charcoal and sulfur right, and I had mixed it thoroughly. But still it fizzled. I never really figured it out until I read this book, some fifty years too late. Jack Kelly is an entertaining writer, and knows how to research a topic such as the history of gunpowder to the point of near exhaustion. For me, the central question raised by the book is the observation that while it was invented in China, they actually made little use of it outside of fireworks. Why was it that the West took their invention, surrounded it with a steady stream of innovative developments in guns and organization, and competed in a steady diet of endless warfare to implement them on a large scale? Kelly really never answers this question, but that is all right--this is not the sort of work that can authoritatively get at it. I particularly enjoyed the section on the development of the sources of saltpeter and the efforts to produce a pure and consistent product. In an age before chemistry, the process developed only slowly, but develop it did. Made from fermenting dung piles as a cottage industry, it was a costly bottleneck for centuries. Kelly traces how gunpowder and the development of processes for improving the strength and size of cannon interacted to produce a steady improvement in metallurgical science. All sorts of spin-offs and scientific developments followed. Few materials have had such a long period of development and use, so there are plenty of fascinating anecdotes and historical oddities for Kelly to relate. And over and over again we learn how important to progress the simple act of measuring and recording the results of trials were. An arty seat of the pants approach just wouldn't do the trick. The book has many illustrations that really helped in telling the story, and I much appreciated them. This is a book well worth reading; it is lively and instructive, and awfully entertaining.

You don't have to like gunpowder to love this book

Published by Thriftbooks.com User , 17 years ago
Gunpowder was a great and awe inspiring fun product when it was invented in China about a thousand years ago, but then the stuff grew up to blast warfare into the modern world before retiring to once again be a great fun and awe. Kelly is a good writer who clearly understands history, and offers a clear concise story about the impact of gunpowder. It helped propel western society to world dominance, even though it was invented and widely used outside Europe; yet, Europeans made it truly destructive and an element of domination. Kelly quotes a sixteenth-century diplomat who summed up the conquering mind-set, "Religion supplies the pretext and gold the motive." In that vein, he also sums as the character of Samuel Colt "as typically American: abrasive, self-made, persistent, eminently practical in his thinking, as imaginative as he was mercenary, an opportunist, a liar, a genius." If these qualities, plus the lust for gold, turned Europeans into world conquerors using gunpowder, square-rigged ships and a variety of other innovations, then we need hardly be surprised if similar horrors are used against us. In other words, gunpowder was the means but not the motive for changing the world. Kelly also suggests "an irrational antagonism toward non-Christians, Moslems in particular." In other words, gunpowder was perfected by secular scientists and used by greedy opportunists under the cover of religious fundamentalism to dominate the world. Kelly raises these questions; but, quite rightly, leaves them unanswered. This is a book about gunpowder, not national psyches or ambitions. Kelly outlines the innovative and highly effective uses of gunpowder through the ages; given his history of the stuff, it leaves every intelligent reader open to ponder the questions of the multiple roles in which it was used. Quite frankly, a similar book could be written about the development of square rigged ships "that changed the world." But then, how many books on dominant weapons systems are needed to repeat the obvious? He offers a wealth of background and opinions on the early use of gunpowder, then the reader to discern the motives, noble or otherwise. His examination falls short of formulae and chemical reaction diagrams, which would have been nice but perhaps superfluous and possibly dangerous; a careful reader can probably piece together a working formula, but probably not a dangerous one. It isn't the sort of book that young boys will use to blow up the outhouse; but, it does present a fascinating glimpse of just what our ancestors had to put up with to make today's world. Until I read this book, I thought I knew a little about gunpowder -- having made my own "fizz powder" and used black powder pistols. For me, Kerry opened up a vast new vista that turned my early efforts into a farce and left my previous knowledge in a thimble. In comparison to my teaspoonful of knowledge, he gave me a bucket of factinating insights. You don't

Published by Thriftbooks.com User , 17 years ago
"Better living through chemistry" was the motto of the Du Pont Corporation. Actually, it would have been more accurate to have said "Better killing through chemistry." Du Pont was at the apex in the history of gunpowder, getting out of the outdated business only in 1971, but by then gunpowder had over ten centuries of effects on history. In _Gunpowder: Alchemy, Bombards, & Pyrotechnics: The History of the Explosive that Changed the World_ (Basic Books), Jack Kelly has tied the explosive chemical not only to changes in war and international history, but has explained its effect on the inchoate sciences of chemistry and physics. Kelly more often writes as a novelist, but here shows an impressive range of facts laid out with a novelist's eye to entertainment.It is well known that the Chinese invented gunpowder (a combination of sulfur, charcoal, and saltpeter), but it is not true that the Chinese were happy to use gunpowder for fireworks and never used it in war. They had incendiaries and primitive guns. The gun was originally viewed as the weapon of cowards. That anyone could use a gun, and that the results of such use were distant and consisted generally of random havoc rather than, say, a well-placed slice from a sword, took some of the valor out of fighting. By the sixteenth century, cannons had developed into forms that would still be used in the American Civil War. There was little scientific input into making either gunpowder or guns; it was, rather, the work of craftsmen who were the earliest engineers. The craftsmen had to put up with an inherently dangerous arena. Not only were accidental explosions common, but barrels inevitably exploded. Gunpowder burns at hundreds of degrees hotter than the melting point of iron, and every shot eroded the barrel. There is a good deal of military history here, naturally, and lots about the effects of gunpowder or lack thereof on such wars as the American Revolution or the Civil War. Gunpowder had other effects, societal ones, changing the importance of class. Kelly writes that since it enabled commoners to hold in their hands a new form of lethal power, gunpowder was "...among the elements that fertilized the long slow growth of feelings of rights and entitlements that would blossom into democracy." It also inspired physics. Studying the trajectory of cannonballs, Galileo was able to overthrow the classical physical theories of Aristotle. Newton, building on this, performed the famous thought experiment of firing a cannonball harder and harder from a mountain, hard enough eventually that the ball would only fall in maintaining an orbit around the earth; from there it was but a jump to celestial motions. Eventually, gunpowder was surpassed by better chemicals; investigations into nitroglycerin and dynamite in the 19th century brought better-burning, safer means of shooting guns and cannons. "Black powder" is now the name given to the gunpowder which is the subject of this interesting

The history of gun powder

Published by Thriftbooks.com User , 17 years ago
Kelly starts with the invention of gun powder in China and goes through 1900. I found the book very enlightening, as well as a fun read. Kelly describes how powder was originally invented by Chinese alchemists, use by the Chinese to fight off the Mongols, adaptation by European powers, the parallel development of guns and cannons, and societal effects like ending the age of castles and spurring the development of chemistry. The chapter on the Duponts was interesting. Highly recommended.
Copyright © 2020 Thriftbooks.com Terms of Use | Privacy Policy | Do Not Sell My Personal Information | Accessibility Statement
ThriftBooks® and the ThriftBooks® logo are registered trademarks of Thrift Books Global, LLC