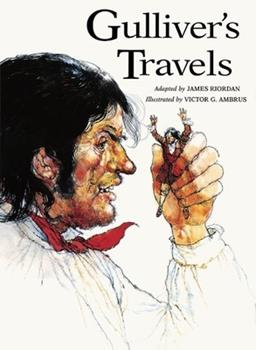 by James Riordan and Jonathan Swift

Embark on a journey with one of the greatest world travelers of all time. Ride with him across the South Seas to the miniature island of Liliput, where people grow no taller than six inches high. Round the Cape of Good Hope to the land of Brobdingnag, home of giants tall as church steeples, and sail on to the exotic lands of Laputa, Luggnagg, Glubbdubdrip, and more. Share Gulliver's incredible adventures, from his singlehanded defeat of an entire...

Published by Thriftbooks.com User , 16 years ago
This book was our 3rd grader's homeschool reading assignment. He is a reluctant reader, so it took him a while to finish it. The vocabulary is slightly difficult for a 9 or 10 year old, but daily discussions about what your student has read helps keep the story interesting and motivates them to read further. HOMESCHOOLERS: READ MY OTHER REVIEWS!

A Classic story describing ourselves

Published by Thriftbooks.com User , 22 years ago
I think that this book was wonderful. I understand the book tothe last words. I think that Swift was giving a hint to the world ofhow we, as humans, truly are. For example, Gulliver first was shipwrecked on an Island inhabited by short beings. He felt all magestic, like he was the leader. He felt as if he was better then all of them, number one, superior in all ways. But when he came to be at the next land, HE was the small one and he finnaly relized that he wasn't the best, the most superior. He was in the middle, like most people. Then, He came to be on a land of super advanced people and learned what humans were tyring to be, only to come to the next land and find the human races true side. I think that this was one of the best books in the world, and I think that it should be required that kids in allschools read it by at least the fifth grade. The book could give kids better moral values, and they would understand how things realy are. END

Published by Thriftbooks.com User , 22 years ago
I like this book because Gulliver was a nice man and longs for adventure.He signed up on a ship and crashed on an island where the people were no bigger than his finger.Before he returned home he crashed on another island where he was no bigger then the people on the island!!!!!!!!!!!!!!
Copyright © 2020 Thriftbooks.com Terms of Use | Privacy Policy | Do Not Sell My Personal Information | Accessibility Statement
ThriftBooks® and the ThriftBooks® logo are registered trademarks of Thrift Books Global, LLC