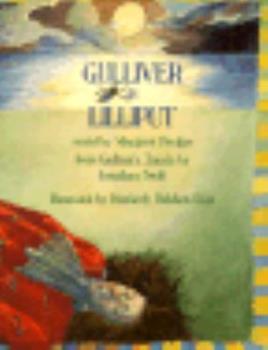 A retelling of a classic adventure from Swift's Gulliver's Travels, featuring colorful illustrations and a simple text, concerns a shipwrecked Englishman's adventures in the land of the six-inch-tall Lilliputians.

Published by Thriftbooks.com User , 16 years ago
Even though the Lilliputians part of the book is the most popular, I enjoyed part 4 the most. I liked how Swift placed another animal higher than humans, showing that we end up at the bottom in the end. I also like how he had Gulliver change due to his stay with the Houyhnhnms.

A masterful introduction for kids to the story of Gulliver

Published by Thriftbooks.com User , 17 years ago
"Gulliver's Travels" is arguably the greatest work on satire written in the English language, but while it might look like a children's book it is not really one. In "Gulliver in Lilliput" the first part of Jonathan Swift's story is retold by Margaret Hodges. This covers Gulliver's shipwreck, his being captured by the miniature Lilliputians, his involvement in the war with Blefuscu, and, in an effort to provide narrative completeness, with return to England. Hodges gets high marks for adapting the story to younger readers, now presented as a children's tale, without completely watering down Swift's sharp satire, although clearly this version emphasizes more of a sense of fun for the proceedings. Hodges is providing an abbreviated version of the original, yet she has managed to keep the important details while working in some of Swift's original language, such as what the Lilliputians say in their own language. Those who have read the original will be impressed with this retelling of the first part of the classic story.What makes this volume even more special are the sepia-toned pen and watercolor illustrations by Kimberly Bulcken Root. In keeping with the spirit of the story she has worked all sorts of humor and wit into her detailed illustrations of Gulliver in the land of the six-inch tall Lilliputians. You will really want to pay attention to the details of each and every picture, because there is a lot to be found. Taken together, the text and illustrations of "Gulliver in Lilliput" provide a marvelous introduction to Swift's famous tale intended for young readers in grades 3-6. Younger readers might not be able to appreciate Swift's satirical attacks, but the important thing here is that they will develop a sense of affection for the work and one day will pick up the original to enjoy the full force of his assault on the conventions of 18th-century society (my recommendation would be the annotated version of "Gulliver's Travels," which will provide all of the details as to what Swift is really doing).

Interested? Read this one and I'll fill ya in!

Published by Thriftbooks.com User , 21 years ago
Gulliver's Travels is definatley a classic. Anybody looking for a book to read should definatley check into this one if they have not already read it. Even if you have a second time would only do you good! Gullives Travles is a book that can reach most levels of reading with the content. A few words a big, but they can be bypassed. Swift has definatley done himself well with this one, and the great part about it is that if you like the book, there are also movies that can be rented of Gullivers Travels. All in all the book is a good book.

The greatest satirical novel ever

Published by Thriftbooks.com User , 22 years ago
Gulliver's Travels is an excellent book. In it Swift satirizes what he thought were the foibles of his time, in politics, religion, science, and society. In Part One Lemuel Gulliver is shipwrecked on Lilliput where the inhabitants are only 6 inches tall. The rivalry between Britain and France is there satirized. In Part Two he is marooned on the subcontinent of Brobdingnag where the inhabitants are giants. The insignificance of many of mankind's achievements are there satirized. Next in Part Three Gulliver is taken aboard the floating island of Laputa, where Swift takes the opportunity to satirize medicine and science altogether - incredibly Swift did not make up the crazy experiments he describes; all were sponsored at one time or another by the Royal Society. Finally in Part Four Gulliver is marooned by mutineers on the island of the Houyhnhynms, in which Swift takes his parting shot at human society - presenting them in degraded form as the Yahoos. Most people read no further in the book than Brobdingnag - I urge you to read the rest.

Published by Thriftbooks.com User , 22 years ago
Swift's classic satire of English and European governments, societies, and cultures should be required reading of every college student. (Except for those who appear to be in law school as is the earlier reviewer who referred to Swift as being an "18th century Unabomber." Swift may have been conservative in his beliefs and not cared much for individuals such as Robert Boyle, who is satirized in the book, but he was not violent. Perhaps our "law student/reviewer" is offended by Swift's biting satire of lawyers and politicians in part four.) The version I read was an annotated edition by Isaac Asimov and contained many passages that had been deleted by previous publishers. Asimov's comments enable the reader to more fully appreciate Swift's satire. In part one of the novel, a ship's surgeon, Lemuel Gulliver, is shipwreaked and finds himself on the island of Lilliput, the inhabitants all being only six inches high. This section is great satire of English politics and wars. Royal ponp, feuds amongst the populace, and wars are made to look rediculous. In the second part, Gulliver finds himself in Brobdingnag in which he is only six "inches" tall (relatively speaking). This part forms another satire of European governments. In part three, Gulliver visits the flying island of Laputa where shades of ancient scholars can be called up. This section is a satire on philosophers and scientists. Scientists are portrayed as men so wrapped up intheir speculations as to be totally useless in practical affairs. Absurd experiments are described (for example, extracting sunlight from cucumbers (but, extracting energy from cucumbers and other plants is no longer so absurd Jonathan)). Also described in this third part are the Struldbergs, men and women who are immortal but who turn out to be miserable and pitiable. In part four, Gulliver travels to the Land of the Houyhnhnms, horses with intelligence but who have no passion or emotion. The word "Yahoo" originates in this part. READ IT!
Copyright © 2020 Thriftbooks.com Terms of Use | Privacy Policy | Do Not Sell My Personal Information | Accessibility Statement
ThriftBooks® and the ThriftBooks® logo are registered trademarks of Thrift Books Global, LLC