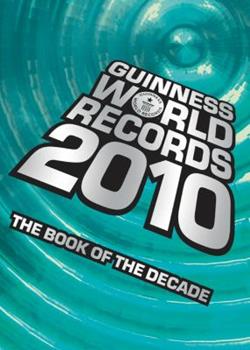 Guinness World Records 2010 continues to build on the intriguing, informative, inspiring and instructional records and superlatives that have made Guinness World Records one of the most famous brands and an annual best-seller around the world. Over 100 million copies have sold since the first edition was published in 1955. Nearly 4 million copies are sold every year in more than 100 countries and in 25 languages. What's new in GWR10'... - Free downloadable...

Published by jason menzies , 3 years ago
one of the best books i have read

Published by Thriftbooks.com User , 13 years ago
Fun reading for my ten year old grandson and as you know reading is fundamental so sparking a child's interest is very important. Thank you for offering this at such a reasonable price with free shipping.

Another entry in this fascinating annual series!

Published by Thriftbooks.com User , 13 years ago
Each year, I eagerly await the arrival of the updated "Guinness World Records." Indeed, it seems to get a bit wilder each year, as new (and sometimes wacky) records are reported. The rules as to what qualifies as a record are laid out (as they are each year). The fun begins even just by randomly leafing through pages (my favorite way of perusing these volumes). The first page begins with "Firsts," such as the first cloned animal (Remember her name? Dolly!); the first in-flight movie (in 1925); the first e-mail; and so on. Some random entries. . . Pages 36-37: the most productive copper mine; the highest active volcano; the longest column of ants (a 328 foot long procession of army ants); the narrowest country. Pages 52-53: the newest Iguana; the most endangered reptile; the largest snake of all time. But it's really the human achievements, I think, that intrigue most people. Among these (pages 76 and following): the farthest washing machine throw by an individual (a hair over 11 feet); heaviest vehicle pulled by hair (count me out in trying to match this feat!); longest waterfall descent in a canoe; greatest distance covered in a pedal-powered boat; circumnavigation of the globe on a bicycle). The volume is organized by a number of overarching categories--Space, Planet Earth, Animal Planet, The Body, Human Achievements, Travelers' Tales, Gazetteer, Modern World, Engineering & Technology, Art & Media, and Sports. A couple examples from a few of these categories to add some flavor. Engineering & Technology: tallest structure, first manned hydrogen-powered aircraft, largest machine ever built, highest capacity chicken manure station (on page 185; this isn't a joke!). Art & Media: fastest-selling download single; most effects shots in a movie; first film with digital water ("Antz"). Sports: Highest pole vault (female), most beach handball championships (female), most centuries in a test series (cricket; I'm clueless), fastest shot in NHL history (hockey), fastest 100 meter dash (male), and so on. So, the preceding examples give a sense of the book for those who have never looked at it. For those who have? You'll know what you're getting. This won't be for everyone, but for those who like real records and quirky records alike, this is hours of amusement (and amazement).

Published by Thriftbooks.com User , 13 years ago
GREAT BOOK THAT ARRIVED RIGHT ON TIME. THIS WAS A GIFT FOR AN 10 YEAR OLD WHO HAS NOW BECOME THE "FAMILY QUIZ-MASTER". THE PHOTOS ARE BEAUTIFUL, AND, THERE IS SOMETHING IN THERE FOR ANYONE OR ANY AGE. VERY HIGHLY RECOMMENDED AS A GIFT, OR FOR YOURSELF.

A must for tweens

Published by Thriftbooks.com User , 13 years ago
My 9 year old came home with a book order form from Scholastic and really, really, really, wanted the Guinness 2010 and the price was $[...]! I said "ya know I will" and then she finished my sentence with "check online to get a better price". I so love that kid and all my kids because they know that if you shop around online you can ALWAYS get it cheaper. I have 2 stores one on eBay and a non-eBay and I can dig a bargain out of anything. She just got it (and before the book order other item she ordered) and we almost had to take the book away to get her to bed. I love it when reading is so fun and they get excited to read.
Trustpilot
Copyright © 2022 Thriftbooks.com Terms of Use | Privacy Policy | Do Not Sell or Share My Personal Information | Accessibility Statement
ThriftBooks® and the ThriftBooks® logo are registered trademarks of Thrift Books Global, LLC