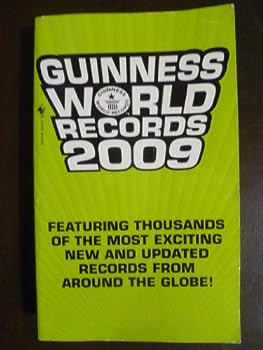 This description may be from another edition of this product. From every corner of the globe-- and beyond-- Guinness World Records 2009 gathers the most amazing, inspirational, and even bizarre record breakers yet! From don't-try-this-at-home human achievements...

Published by jason menzies , 2 years ago
very good read and in amazing condition for such a low price just amazing

Published by Thriftbooks.com User , 12 years ago
I have bought the Guinness: World Records since 1978 for my son's birthday gift. He is now 42 and still looks forward to receiving it. He has two teenage boys loving it as much as he did and still does. A perfect gift for a male or female at any age!

Published by Thriftbooks.com User , 12 years ago
The 2009 version comes complete with 3D glasses to view some of the pages. Material is divided into Space, Living Planet, Human Achievements, Science and Engineering, Sports, and more. Four thousand records are summarized in the book, out of Guinness' 40,000 in their database; 2,707 are new in 2008. Interesting facts such as the temperature in the center of the sun (28 million), pressure (250 billion times that at sea level) - created by fusing 600 metric tons of hydrogen into helium every second; the largest liquid mirror - 6,613 lbs. of mercury spun to form a 19' 8" concave mirror for astronomical observations (clever), the deepest dive by a seal (5,017'), most destructive insect (about 2' long, the desert locust found in Africa, West Asia, and the Mid-East eats its own weight each day; a "small" swarm of 50 million eat enough each day to feed 500 people for a year), tallest flying bird - cranes, at 6' 6", the heaviest pumpkin (1,689 lbs), innumerable sports records (eg. covers Bret Favre's first year - 0/4 attempts, the fastest average speed in the Tour de France - Lance Armstrong's 25.9 mph), most millionaires per capita - Norway, with 1 in 86, excluding their main residence, farthest-leaning tower (the bell tower in the Protestant church in Suurhusen, German leans 5.19 degrees, vs. the Leaning Tower of Pisa at 4.0), loudest noise (Krakatoa in Indonesia on 8/27/83 - heard 3,100 miles away, largest city population (Tokyo - over 35 million), largest badger tunnel network (2,883 feet with 50 chambers and 178 entrances. Definitely will keep you busy!

Published by Thriftbooks.com User , 12 years ago
The book contains spectacular pictures of Jupiter. There are other curiosities like the world's smallest hippo. The fastest growing tree is shown in full color. A gigantic mantis is depicted. In addition, a grotesque picture of a man with highly elastic or stretchy skin is shown. A beautiful rendition of the Arabian Desert indicates that the terrain is quite sandy compared to other environments. Overall, the acquisition would be a substantial curiosity with the 3D photography.

The best gets better every year

Published by Thriftbooks.com User , 12 years ago
I still buy and read the Guinness Record book every year, because it's become like an old friend that I like to catch up with, but I have to disagree with Birch East. I like the way it has changed and brings out a fresh look each year. The changes, like holograms, 3D whatever, make it fresh every year. My nephews also are big fans of the 3D gimmick. I do agree with the recommendation for Getting into Guinness: One Man's Longest, Fastest, Highest Journey Inside the Most Famous Record Book, the new book by Larry Olmsted about the history and culture of the Guinness World Records book. After reading his review I snapped up a copy and it is great--very entertaining and a fun read! I have read the record book for years but never stopped to wonder where it came from (Guinness Beer!), how it got so big, and how large a role it has played in pop culture, and just how crazy some of the record holders seem to be. Getting Into Guinness is the story behind the records and a fun, well researched, adult read.
Copyright © 2020 Thriftbooks.com Terms of Use | Privacy Policy | Do Not Sell My Personal Information | Accessibility Statement
ThriftBooks® and the ThriftBooks® logo are registered trademarks of Thrift Books Global, LLC