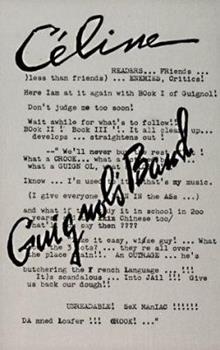 (Book #1 in the Guignol's Band Series)

The hero, the semi-autobiographical Ferdinand, moves through the nightmare of London's underworld during the years of World War I. In this distressing setting, he meets pimps and prostitutes, pawnbrokers and magicians, policemen and arsonists. He sees social and physiological decomposition as these processes unfold along parallel lines of development. The illusions of existence are nakedly exposed. The narrative erupts in C line's characteristic elliptical...

Published by Thriftbooks.com User , 17 years ago
Speaking as a diehard Celine fan, and someone who still cranes his neck to hear when the word "Celine" is spoken nearby even though I know damn well they're talking about HER...Celine never wrote a bad novel, nothing even close, few writers are as consistently excellent as Celine was. However, no writer in my experience is so dependent on his translators to get him across. Since he used so many then-topical slang words in his original French, he has tried the talents of everyone who's worked to recreate his magnificent prose into another language. Fortunately for we English readers, he found the perfect translator in Ralph Manheim, a man who dug into Celine's brilliant grossness without squeamishness, and produced what I believe to be the closest we can ever get to the source. In fact, as Kurt Vonnegut has noted, since Celine wrote in such a bizarre argot it's possible that the French themselves can no longer really appreciate him like we can. (Interesting Side Note: the late Ralph Manheim also translated Hitler's "Mein Kampf", if you can get your mind around THAT one)"Guignol's Band", unfortunately, was not translated by Manheim, and it suffers considerably as a result. The translator tries his best, and with such fantastic source material it's hard to go wrong, but it's just simply a miss. Doesn't FEEL like Celine. The more recent translation of the sequel, "London Bridge", done by Dominic Di Bernardi, however, is great. Not exactly up to Manheim's genius, but very close, a wonderful spin on Celine's language.What "Guignol's Band" needs, and badly, is a new translation; preferably by Di Bernardi, but regardless by someone not afraid to plunge both hands into Celine's words. It takes pure fearlessness to handle the greatest French writer of the 20th century (and damn near the greatest in ANY language, ANY century), and until somebody steps up to this plate, "Guignol's Band" will sadly remain one of Louis-Ferdinand Celine's lesser works.

Published by Thriftbooks.com User , 20 years ago
Like his Bulgarian pianist-pimp boro, Celine enters the house of the gangster novel, hurls a grenade and flees, recording the pieces. This is an underworld novel Lautreamont might have written - indeed, the first third reads like an update of 'Maldoror', less narrative chapters than prose poems of war, urban fever and mental breakdown, imploding under the simultaneous tension of concentration and fragmentation. The opening sequence is thus very difficult to read, the air attack on a traffic-jammed bridge imaged in a verbal bombing, which, while undeniably brilliant and exciting is very exhausting. if you are understandably tempted to give up, persevere - the novel 'settles' into a relatively conventional (and hilarious) plot, divided into three sequences dominated by three larger-than-life father figures who take the hero under their wing - a ganglord, a pawnbroker, a magician. Despite a vibrant vision of London rarely experienced in literature, Celine constantly pushes material normally associated with generic materiality into the realm of magic, farce, fairy-tale, pantomime, the Guignol of the title - the novel's complex allusiveness includes Shakespeare and the Arabian Nights. This conflict, between realistic content and fantastic/theatrical form gives the novel its feeling of being on the brink of collapse; its eruptions into brawls (both narrative and verbal) looks forward to Pynchon's 'V'. Be warned - although you wouldn't know it from the information on this edition, this is only the first part of a two-volume novel (the second is translated as London Bridge). I didn't know this when reading, which was obviously affected.

Published by Thriftbooks.com User , 21 years ago
It's almost impossible to break Celine's works down into the usual category of "books." Basically everything he wrote, his entire oevre, is one metabook. If you want to get sequential, start with Death on the Istallment Plan and work your way up from there. DOTIP deals in large part with "Ferdinand's" childhood and we are treated to descriptions of a surreal upbringing (an entire neighborhood enclosed in soot-encrusted glass, a mother and father depicted as slightly less than imebeciles). I would then suggest reading Journey to the End of the Night (primarily about WW1 and his trip to America), Guignol's Band, London Bridge (Guignol's Band II), Rigadoon, Castle to Castle and North. All have been well translated. Don't be put off by puffy readers who say that these texts can only be appreciated in French. This is one author who comes through loud and clear (probably just as biting and clever in Swahili) in translation. Celine deals in high comedy and his novels move at the pace of a Mack Sennet or Charlie Chaplin film. The energy is always frenetic and he seldom allows you any lulls. The descriptions in this book of "The Leicester Boarding House," lorded over by Cascade, Dr. Clodovitz, the wounded-in-the-ass Joconde, Boro - master of the keyboards, but most of all Titus Von Claben, will leave you howling if Celine strikes a responsive chord. If he doesn't, then you have a different sort of sensibility than mine and should probably avoid this author at all costs. There is nothing Keilloresque about Celine. He came up out of the Paris slums and witnessed some of the most horrific scenes the 20th century produced. That he came out of it all with a sense-of-the-ridiculous intact is a marvel in itself. He was on the wrong side of most issues his entire life. He made some stupid choices. But those who maintain that he wallowed in self-pity are way off the mark. He always points to himself as his own worst culprit. He never pretends to heroism. He is, like Chaplin, always the fall-guy, but is also, in the same light, a survivor. He gets up after his prat-falls, dusts himself off and heads on towards the next chapter.

Published by Thriftbooks.com User , 21 years ago
This book tumbles, it roars, it defies conventions that other novelists use. But it is not crude; and in no way is it sadistic or full of hate. It chronicles the life of an ill-fated man, wounded from WW1, and the events that take him on wild rides. Yes, average readers may not sympathise with the character, but there is something to be said about him. This character is an outcast; a man that doesn't choose his way of life, but who is unfortunate in the rollicking world of post WW1 London. Thus, he retaliates in his own unique and off-the-wall actions. This novel says a lot about unfortunate men. And of cousre, about being fed up with society, people, and bad luck. Anyone interested in a break from dull novels should read this book.

A messy, passionate, and indescribable experience

Published by Thriftbooks.com User , 24 years ago
This is the book we shall remember as being Celine's third, coming after "Journey to the End of the Night" and "Death on the Installment Plan." But "Guignol's Band" actually comes after "Trifles for a Massacre", an intense study into judaism that may or may not have been nihilistically anti-semitic. Regardless, it cost him his literary career, a cost he was not willing to pay. Of course, if it gave him a freedom... It was to pursue his style... Often, God, considered indecipherable!... Certainly here, in this recitation of his time in London during WWI as an AWOL solier, it is a mess... But what a mess!... The prostitutes... Dark hospitals... Sleazy import dealers... Definitely for Celine addicts... Tough prescription for average readers... But, as Ferdinand might say, "What do they care?"...
Copyright © 2020 Thriftbooks.com Terms of Use | Privacy Policy | Do Not Sell My Personal Information | Accessibility Statement
ThriftBooks® and the ThriftBooks® logo are registered trademarks of Thrift Books Global, LLC