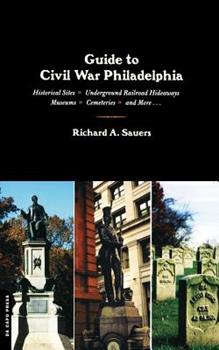 When the Civil War began in 1861, Philadelphia was an important industrial center behind the Northern war effort. The city boasted two large federal arsenals, a major shipbuilding facility, the country's largest locomotive factory, and the busiest flag manufacturer in the United States. Philadelphia bankers raised valuable government bonds and millions of dollars for the Lincoln administration. Several prominent Union generals were born in Philadelphia,...

Published by Thriftbooks.com User , 17 years ago
This book starts with a brief introduction about Philadelphia before and during the U.S. Civil War. In 1860, Philadelphia was the second largest city in the country with over half a million people. Its population was increasing as many immigrants arrived and moved to neighborhoods along the edges of the city. There were businesses everywhere, especially in textiles, and the railroads covered so much of the city that they were a safety concern. The book addresses a little of what that time was like, but its main purpose is to describe sites associated with the war. There are 15-20 sites described per chapter, with chapters ranging from the Abolition movement to libraries to vanished Civil War sites. I picked up this book because I was researching some Philadelphia ancestors who lived in the city during the Civil War and I wanted to know more about some of the resources available for researching that period. For this reason, I found the chapters on libraries and cemeteries to be more interesting. Over 20 museums, libraries, and historical societies are described, including lesser known places such as the Civil War Library and Museum on Pine St. and the Grand Army of the Republic Civil War Museum and Library. There are examples of regimental histories, biographies, manuscript collections, etc. that you can find at these locations. Descriptions for 18 cemeteries are also provided, with Laurel Hill and Woodlands receiving the most attention. Information includes famous Civil War military people who are buried there. The appendix has some interesting lists, including companies that had government contracts, military hospitals that existed between 1861-1865, Civil War manuscript collections that can be found at the Historical Society of Pennsylvania and the Chester County Historical Society, and a list of Philadelphia shipyards with their specific vessels and launch dates. Also, the book provides over 70 black & white photos. Overall, this is a nice introductory guidebook. It's especially useful if you're looking to take some day trips of Civil War sites or cemeteries, and you're a historian or a genealogist. It's not for the casual tourist. Also, if you're just starting to do some research on Philadelphia history/genealogy during that period, then this book can give you a general idea of where to find some things.
Trustpilot
Copyright © 2022 Thriftbooks.com Terms of Use | Privacy Policy | Do Not Sell or Share My Personal Information | Accessibility Statement
ThriftBooks® and the ThriftBooks® logo are registered trademarks of Thrift Books Global, LLC