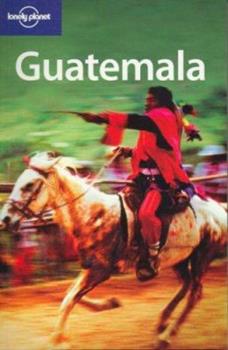 by Lucas Vidgen and Lonely Planet

Details on finding Mayan archaeological sites off the usual tourist path, great coffee and hot showers are included in this guide, as well as activities, and a Mayan and Spanish glossary of terms.

Published by Thriftbooks.com User , 14 years ago
Once again, the Lonely Planet has outdone itself with its guidebook, Guatemala. Even Guatemalans recognized the book and held it in high regard. My traveling companion and I started calling it, La Biblia--the Bible--by the second day of travel. It was, however, a 2004 edition. I traveled in February 2007. Some things were out of date or not mentioned. Nonetheless, as someone who mainly hit the tourist spots of Antigua and Pana, I felt very well satisfied with the advice and guidance in the book.

This book is spot on.

Published by Thriftbooks.com User , 16 years ago
I traveled to Guatemala for two weeks in the summer of 2005 and used Lonely Planet the entire time. It was my first trip there, so I needed and wanted extensive detail and maps, which this book provided. I found it to be right on about everything from restaurants and hotels to ATM locations. I appreciated the small bits of cultural and historical information as well. The transportation sections were the most helpful. On several occasions I had people ask to borrow my LP to look up bus connections. Overall, I thought it was excellent and recommend it highly to anyone traveling to Guatemala.

Great for a one-week trip

Published by Thriftbooks.com User , 19 years ago
While the other reviewers clearly know more about Guatemala than I ever will, I found this book much more helpful than the Rough Guide. The maps were easier to read, and the hotel places had prices, which was very helpful to me...

Reviewed this one, but bought Rough Guide

Published by Thriftbooks.com User , 20 years ago
I have travelled to Guatemala, Belize and Honduras several times over the last 4 years. I met Conner at a friend's office in Guatemala City while she was researching and writing this book. My husband and I had a fantastic time visiting with Conner and sharing travel stories. I see from some of the other comments that readers felt that the book was rushed and not well researched. I know for a fact that Conner had lost valuable notes on the highlands while in another part of the country and was going back thru the highlands to rebuild her notes. I'm not surprised that this section is not complete. Additionally, I met Conner the day after the WTA Riots in Seattle, Washington. That was in December 1999. Things can change quickly in some areas of Guatemala. Other others don't ever change. Depending on the government. She did tell us of her harrowing hike to El Mirador. In general, when I reviewed the book, I found information to be OK. However, I have found over the years we've travelled that the Rough Guide is more accurate. We have also met the writer for the Rough Guide, Peter Eltringham while travelling in Belize. Peter has a wealth of information and is brutally honest about what to expect. Especially if you want bus schedules, travel times for busses, dangerous areas. The Rough Guide makes sure that travel advisories are noted. For instance, the danger around the Lake Atitlan area for tourists. I've also found that the Rough Guide is considerable more accurate with regard to price ranges for accomodations. The maps that are included are also very good.For those of you who have never travelled to Guatemala. It is a beautiful country. The people are poor but friendly. Just like travelling anywhere -- don't leave your better judgment at home. If it looks like a rough area, it probably is. We never travel at night. We always check with out local host/hostess at whatever accomodations that we are staying at for information about the area -- crime, areas to stay away from etc.That said -- I've camped in the jungles at Mayan ruins. I've hiked into Salpeten. I've taken a pickup truck from Copan to the border of Guatemala, then the chicken bus to Chiquimula and then a bus to Guatemla City and to Antigua in one day. I've travelled overland from Belize City to Flores more times than I can remember. I'm looking forward to spending more time at Lake Atitlan, probably in Santa Cruz or San Marcos. Also, looking forward to Rio Dulce and Coban. If you've never travelled independently before, I'd say get both books. The Lonely Planet and the Rough Guide. Both writers are experienced travellers. If you get hooked on travelling independently (that is no formal guide service) -- you'll start to develop your own resources.

The best guidebook out there

Published by Thriftbooks.com User , 20 years ago
I used this guidebook to plan my three week trip in Guatemala and I found it to be by far the most useful of the three guidebooks I read. Not only is their information correct a large percentage of the time, but also the information they provide is exactly the kind that I was looking for. I really like the tone of LP guidebooks--practical, accessible, made for the common (not wealthy) traveller. I highly recommend this book. It was a lifesaver for me over and over again as I travelled through beautiful Guatemala. Thanks Ms. Gorry!
Copyright © 2022 Thriftbooks.com Terms of Use | Privacy Policy | Do Not Sell My Personal Information | Accessibility Statement
ThriftBooks® and the ThriftBooks® logo are registered trademarks of Thrift Books Global, LLC