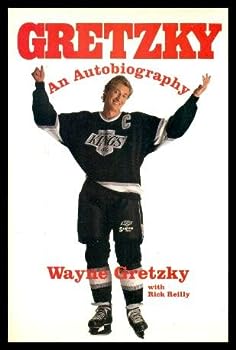 by Wayne Gretzky and Rick Reilly

This description may be from another edition of this product. Playboy called Gretsky the greatest athlete of the Twentieth Century, and USA Today readers voted Gretzky the century's fourth greatest behind Muhammad Ali, Babe Ruth, and Jim Thorpe. Indeed, Gretzky...

Published by Thriftbooks.com User , 16 years ago
i started to read this book for a school project. i chose to do it on wayne gretzkym since i love hockey, i mean it is like my life, but there were so many gretzky books to choose from, so i chose to read the autobiography, i'm glad i chose this book, it is just about the best book i have ever read, it has a lot of good information and by reading this book i learned a lot of new information that you could only find out if you knew wayne gretzky personally. he opens it up and gives you a good insight on what it was like playing professional at such a young age. not only is the book filled with facts and excellent photos, but you also have a sense of his feelings from reading the book, it takes you back in time and i would definitely recommend this book to anybody

Not the goody-two shoes I thought he was

Published by Thriftbooks.com User , 20 years ago
Who knew that Mr. Lady Bing was so opinionated? In that respect, this book was a pleasant surprise, because anyone can give the standard PR/PC spiel. I thought I was getting the usual sports bio, "We went into game 5 tired and spent, yada yada yada..." While Wayne does include things like that, he does provide insight on what it feels like to be a highly recognizable person. Most celebrities are too egotistical to admit to feelings of lonliness at the top, yet Wayne admits these feelings, and also enjoys his moments. I also liked how he pulled no punches when it came to his feelings about Peter Pocklington. You'll want to get into a hot shower and scrub yourself red, after reading the chapters on The Trade. He also occasionally decries The Supreme Lord Sather. Nice to see someone in the game not worship at the altar once in a while, isn't it? Yet he's still the greatest ambassador hockey has had. This book is better than Kevin Lowe's gloss-job, I'll tell ya that.

it was an exelent book all of the quots were great

Published by Thriftbooks.com User , 22 years ago
I loved the quotes. once I started to read it i could not stop. I could not belive I read a book that was that long. Wayne Gretzky is the greatest man who ever lived. It is amasing when you think about it how many peaople try to idolise him. go into a hockey rink and look to see how many people actally do idolise him. And it is all because his jursey was too big for him when he was playng with the 17 year olds. My favorite part was when walter Gretzky quotes "I did not build a rink to watch my son grow up to be a pro I did it so I could watch from the kitchen where it is worm"

This was a great book!!

Published by Thriftbooks.com User , 22 years ago
I thought that this was a great book. It tells about his first ten years in the NHL and how he broke tons of records. If you are wanting to learn more about Wayne Gretzky I would recommend reading this book. I just picked up this book the other day when he retired just to see how great of a hockey player he was and forever will be. I especially enjoyed this book from a hockey players view since I have played hockey for nine years and enjoy this sport verry much. So if you want to read a great book by a great hockey player read this book.

Published by Thriftbooks.com User , 22 years ago
This book was one of the best books I've ever read. It really makes you want to follow your dreams.
Copyright © 2020 Thriftbooks.com Terms of Use | Privacy Policy | Do Not Sell My Personal Information | Accessibility Statement
ThriftBooks® and the ThriftBooks® logo are registered trademarks of Thrift Books Global, LLC