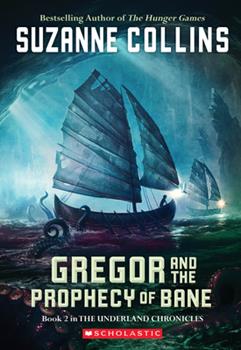 Gregor and the Prophecy of Bane

(Book #2 in the Underland Chronicles Series)

The action and adventure continue in the second book in Suzanne Collins's masterful New York Times bestselling Underland Chronicles Months have passed since Gregor first fell into the strange Underland beneath New York City, and he swears he will never go back. But he is destined to be a key player in another prophecy, this one about an ominous white rat called the Bane. The Underlanders know there is only one way to lure Gregor back to their world:...

Published by Thriftbooks.com User , 14 years ago
This series is exciting and thrilling for readers of all ages. It has a male hero in his early teens that is faced with a lot of decision making and follows his thought process. Fun and tantalizing, it is the Indiana Jones of Fantasy.

Published by Thriftbooks.com User , 16 years ago
This is the best book I have ever read and I hope they go on with their tales of the exelent books of the Underland. (This is my son speaking, he really wanted to write a review because he likes the book so much!)

Published by Thriftbooks.com User , 17 years ago
A word of caution, you can't put this book down. It is so interesting and exciting, the world that is created underground and its characters just draws you in. This is the sequel to the outstnding book, "Gregor the Overlander", and once again Gregor and his baby sister travel to the Underland to help save Regalia. The evil giant rats are at it again, and have discivered a long lost secret weapon. Gregor learns of a strange new power that he has, useful and frightening at the same time. Suprising allies and bonds form together to protect the warrior on his journey to the labyrinth. The company travels over an underground sea this time before riding on the backs of giant bats, with giant fireflys to light their way. Along their way they face an attack by flesh-eating insects, a huge whirlpool, undersea dinosaurs, stinging giant phosphorescent squids, and other dangers at every turn. And after Gregor has again risked his life and everything he owns for the people of the Underland, he is charged with treason! A third book has just been released, "The Curse of the Warmbloods", I can't wait to read it.

Destined to become a classic

Published by Thriftbooks.com User , 17 years ago
I thought the same thing about the first one: this book deserves to be recognized as one of the finest books of children's fiction in recent years. I don't generally pick up books in hardback, but after reading Gregor the Overlander, the first in the series, I had to get this. Like its predecessor, it deals with a fantastic voyage in a mysterious land with very high stakes. Gregor's adventures may bring him face to face with giant talking cockroaches and rats, but they're very serious novels nevertheless. Gregor has to grapple not only with external dangers, but with internal as well--deciding what kind of person he desires to be. Moving adventures with a lot of heart, they're worthy additions to the bookshelf of any child--or adult.

Published by Thriftbooks.com User , 18 years ago
Gregor and the Prophecy of Bane, like the first book in the series, Gregor the Overlander, is absolutely excellent. I would recommend this series to anyone who enjoys top-notch storytelling. Collins strikes a nice balance: most of the characters have a great deal of depth, yet these two books are also real page-turners, with almost constant action. The dialogue is also great; that of the Overland humans and rats really rings true (especially Mrs. Cormaci, who made me laugh out loud), and the unusual manner of speaking of the Underland humans, bats, and roaches suits those characters very well (don't worry -- the language is never hard to understand). However, I have a small warning to give parents: the stories are dark and might be a bit scary for some kids, and sometimes main characters die. With that in mind, these might be better books to read with younger/sensitive children than to have them read on their own. Don't miss out on this series -- it's superb. I can't wait for the next installment!
Trustpilot
Copyright © 2022 Thriftbooks.com Terms of Use | Privacy Policy | Do Not Sell or Share My Personal Information | Accessibility Statement
ThriftBooks® and the ThriftBooks® logo are registered trademarks of Thrift Books Global, LLC