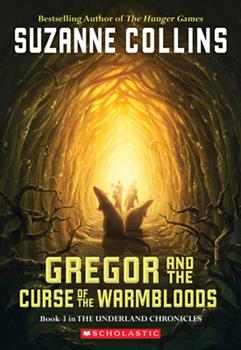 Gregor and the Curse of the Warmbloods (the Underland Chronicles #3): Volume 3

(Book #3 in the Underland Chronicles Series)

In the third installment of Suzanne Collins's New York Times bestselling The Underland Chronicles, Gregor must stop a plague from spreading through the Underland.With two prophecies fulfilled, Gregor is now focused on the Prophecy of Blood, which calls for Gregor and the princess, Boots, to return to the Underland to help ward off a plague. His mom agrees to let them go--on the condition that she travels with them.When they arrive in the subterranean...

As Gregor matures, so does the story

Published by Thriftbooks.com User , 16 years ago
I don't give too many things five stars and I had to think this one over a bit, but upon reflection, I think it deserves it. Although you do have to read the first two not just for the backstory, but to see why it rates higher, the way it's more developed, the writing more mature. While the first book had a focus on us getting to know Gregor and the Underland, the second on Gregor's growth emotionally and mentally, this one is all about disillusionment, the realities of politics and human greed, and Gregor truly leaving most of his childhood behind. The Underlanders, for all that they look different are, inside, no different from the rest of humanity. That's the lesson I came out with, anyway, and it's a good one. In this latest quest, any remaining illusions Gregor (or the readers) might've had about Underland are irreversibly shattered. The human Underlanders are mostly decent people, the same as the rest of humanity as we know it, but there are enough bad apples in power there to make them all look bad, the same as here in the Overland. There's prejudice, blind, unthinking hatred, rifts between families, murder, malicious deception, pure greed, and it all gives the story such a good feel of reality. In a world filled with giant creatures, that touch of reality grounds the story and makes it easier for the reader to relate to, makes the suspension of disbelief much easier to maintain. A plague is mowing its way through the warmbloods of Underland and yet another prophecy says that Gregor and Boots must be there to stop it. Only this time, their mother isn't letting them go alone. Her inclusion, and the way she's yanked suddenly from the story by contracting the plague, I found particularly interesting. Gregor is afraid of how it will make him look, the "warrior" with his mother hovering over him. And then she's not there and he's on his own again, put in the position of rescuing her, as he once had done for his father. I see this as the final severing of Gregor's ties to his childhood. He's truly the caretaker here, his own person with his mother out of the picture for almost the entire story. And he fills the roll well. Gregor's an old hand at questing now and knows how to deal with it. Yes, he makes a few mistakes along the way, but that's a lack of experience and wisdom. Both of which he gains at a heavy price. And throughout the journey he reinforces in his own mind (and ours) that he's not a child anymore, no longer one of the "pups." It's something that you can see visibly saddens the adults around him, but it's also something they accept, because what's done is done and this was necessary. The ending isn't truly a surprise, not if you read one of the characters right in the beginning, but it's disheartening and you can really feel for the ones who were betrayed. All of them, even the non-humans. It's also a good bit of social commentary, sobering when you look at it. Gregor's return to the Overland and the problems left for him an

entertaining, suspenseful, even a little scary...

Published by Thriftbooks.com User , 16 years ago
After reading the first two books in the Underland Chronicles ("Gregor the Overlander" and "Gregor and the Prophecy of Bane") I was waiting for a third one to come out. At my school library I was looking for a good book and asked my librarian if she recommended this one. She said that she didn't think Suzanne Collins could surprise her again, but she did! Certain images of the scenes in the other books stay stuck in my head, but the events in this book are still reeling through my mind! It's very vivid. It also puts Gregor in more of a heartfelt, urgent quest because the lives of his mother and his bond, Ares, are at stake when they contract the plague, as well as Howard and Andromeda. Yes, people do die, but that makes it even more real to me. This book is somewhat "darker" than the previous two-- not victorious, as Gregor has more experience and is more aware of the danger. He is still attempting to harness his raging abilities. And there are some unexpected surprises. I was shocked to hear where the plague had started, but I won't give it away-- I'm sure there are some eager readers out there now! This book was 358 pages, but I read it in 4 hours straight-- I hope that gives you an idea of how entertaining it was! I also wonder how many people will agree with me: I think there has to be another book, especially with the cliff-hanger ending!

Gregor and the Curse of the Warmbloods

Published by Thriftbooks.com User , 17 years ago
I have been following Gregor through his many adventures. This new book did not let me down. Gregor must find the cure for a deadly disease or he will lose his mother, friends, and Aries. He has no choice put to put his life in danger once again. Gregor show so many wonderful qualities in a character. Along with the some of the other characters from the previous books this book is full of new adventure and tough decisions. While it is a childrens adventure story I would recomend it to anyone who enjoys a good adventure novel.

Published by Thriftbooks.com User , 17 years ago
Gregor and the Curse of the Warmbloods is an awesome book!!!!! I love it! This is the 3rd book in the Underland Chronicles. It continues the story of Gregor and his family. Gregor is anticipating to get a note from the Underland about the dissapperence of Luxa. Then Gregor is called down to go for a meeting, but his mom won't let him. Then Gregor's mom agrees, but she will go with them this time. A mysterious plague a broken out in the Underland, making all warmblooded creatures sick. When Gregor's mom is sticken with it, Gregor and Boots must go on a quest to fufill the Prophecy of Blood. Brewing with more scarier moments then the first two, fans of Suzanne Collin's series will agree with me that this is the best book out of the entire series!

Published by Thriftbooks.com User , 17 years ago
Following "Gregor the Overlander" and "Gregor and the Phrophecy of Bane", this third story is truly one that will leave readers in awe of how Collins sculpts such a creation to life. Oddly enough, though, "Gregor and the Curse of the Warmbloods" is truly a darker story than the previous two, at times being eerily exciting. There's action, and Gregor's newfound Rager-instincts are taking their toll at the most unpredictable moments possible. And who would expect in the middle of this inspiring adventure. . .a little family reunion? Things are never what they seem.
Trustpilot
Copyright © 2022 Thriftbooks.com Terms of Use | Privacy Policy | Do Not Sell or Share My Personal Information | Accessibility Statement
ThriftBooks® and the ThriftBooks® logo are registered trademarks of Thrift Books Global, LLC