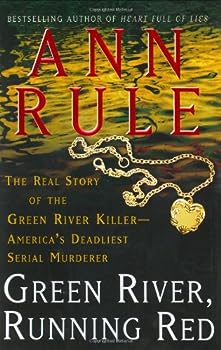 In this provocative and eye-opening classic of investigative journalism, the #1 New York Times bestselling author and "America's best true-crime writer" (Kirkus Reviews), Ann Rule, explores the nearly... This description may be from another edition of this product.

A Book Worth Waiting For...

Published by Thriftbooks.com User , 16 years ago
Unlike some of the previous reviewers, I found this book to be both interesting and engaging. If you have followed Ann Rule's work over the years, you know she has been waiting for (and working on) this book but was unable to do so because the killer had not yet been caught. I've read other books on the GRK and found this one to be the perfect book 'end' to the story. I find it refreshing that she focused on the victims, who were for the most part, faceless "hookers" to much of the population while these crimes were happening. I also liked the way the narrative went from crime to killer; weaving time together for the reader. I wanted to read this book precisely because Ms Rule was so involved. I enjoyed the fact that she'd been to the scenes and met the key players. As a true crime reader, I put this near the top of my list.

Published by Thriftbooks.com User , 17 years ago
Ann Rule, Queen of True Crime, recounts the horrors of the Green River Killer, in her 24th book entitled "Green River, Running Red." A book that was over 20 years in the making, Rule begins at the beginning with the Green River Killer's first known victim, Wendy Coffield. From that point forward, the reader is shown how the investigation unfolded and would eventually put a name and face to the Green River Killer with his arrest in November of 2001. Justice was long overdue for the 49 women that were brutally murdered. Rule acquaints the reader with each victim, putting a face, personality, and family with their names. Rule treats all of her subjects with a great deal of respect, even the killer himself. The author manages to present the information in detail, without sensationalizing it. If you have never read an Ann Rule book and you like true crime, I highly recommend her works. I would definitely recommend this book to anyone who is interested in the Green River Killer, but don't read it alone at night!

Published by Thriftbooks.com User , 18 years ago
You have to wonder what makes a serial killer tick. Perhaps this book by Ann Rule will help to explain a little. The case of the Green River killer began in 1982, when the first body was found. The case went on for twenty years until a new DNA matching technique was available and used to identify Gary Ridgway. He later confessed to killing 48 women, and is suspected of killing an addition twenty or more. This extraordinary book chronicles the search for the killer, but in doing so it brings great humanity to the murdered girls and their families. It also covers the years of frustration for the police working on the case. Finding body after body with no evidence to go on to link them to a killer.

Published by Thriftbooks.com User , 18 years ago
How fitting that this book is less about "Green River Gary" - as he himself had hoped - but rather focuses on his victims, with a positive tribute to each. Ann's regular readers may be surprised at the dearth of material on the GRG, but will not be disappointed! I lived in Kent during the 80's, and regularly rode my bike along Green River Road. I was horrified the day Opal, Marcia & Cynthia's bodies were found on the banks of the Green River, realizing I'd attributed the smell to the meat packing plant across the River. I'm thankful we no longer need wonder if the killer is still out there. Thanks to Sheriff Dave Reichert and the Green River Task Force for solving the crimes - and to Ann for telling the story.
Trustpilot
Copyright © 2022 Thriftbooks.com Terms of Use | Privacy Policy | Do Not Sell My Personal Information | Cookie Preferences | Accessibility Statement
ThriftBooks® and the ThriftBooks® logo are registered trademarks of Thrift Books Global, LLC