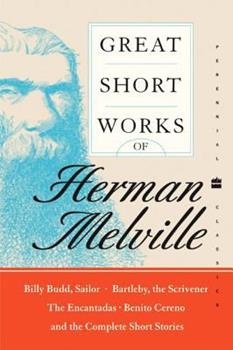 Billy Budd, Sailor and Bartleby, the Scrivener are two of the most revered shorter works of fiction in history. Here, they are collected along with 19 other stories in a beautifully redesigned collection that represents the best short work of an American master.As Warner Berthoff writes in his introduction to this volume, "It is hard to think of a major novelist or storyteller who is not also a first-rate entertainer ... a master, according to choice,...

Published by Thriftbooks.com User , 14 years ago
This is worth buying if only for the masterpiece that is Bartelby the Scrivener. One of the all time great short stories, it tells the story, narrated by an employer in a Wall Street Law office who finds a peculiar scrivener called Bartelby in his employ. Bartelby is initially a quiet and efficient copyist, but when asked to undertake extra work, he deflects it with the simple rejoinder 'I would prefer not to.' He repeats this mantra, over and over, calmly and without malice. 'You will not?' thunders his employer in frustration, 'I prefer not,' says Bartelby. And with that simple 'I prefer not', Bartelby strikes a blow on behalf of all the inconspicuous millions who find themselves wasting their lives, their creative human potential, in drab, workaday office jobs, counting down the months of their lives staring at a computer screen, the sterile hum of life passing them by. All the tedium of office life is in Bartelby - anyone who has worked in such an environment will recognise the compulsive snacking, the drab natureless view out the window, the modes and systems of the company affecting the consciousness and behaviour patterns of the staff. Bartelby, simply and effectively, questions all of this with his quiet actions, heading off in another direction from the common herd, unpicking the knot at the end of the string that binds all corporate paperwork together. Hurrah for Bartelby, whose quiet, tragic existence unravells the whole rope, and hurrah for his legacy - for without Bartelby there would be no Camus, there would be no 'Something Happened' by Joseph Heller, no 'And Then we Came to the End' by Joshua Ferris, the masterful debut office novel published this year. To read Bartelby, to devote a valuable hour of your life to Melville's pioneering existentialist story, is to momentarily glimpse a chink in the darkness, a sense of what might and could be, instead of the living death that a great many people trudge through, like the dead in T.S. Eliot's poem 'The Wasteland', trudging over London Bridge on their way to work.

truth comes in with darkness

Published by Thriftbooks.com User , 20 years ago
This is the beginning of American literature. And these short works I think tell the tale more clearly than that confusing (though still great) big book Moby Dick. Melville wrote from an outsiders perspective and he was an outsider as perhaps all Americans were because we did not yet have an identity as a people. Melville explores our institutions of justice and our ability to comprehend life through them in Billy Budd in the way a foreigner would examine justice and understanding in a land whose logic he was unfamiliar with. He seems to ask "how will our sense of justice be different than France's or England's and therby make us a different nation than theirs?" or even more simply "Is real understanding(of ourselves, or others) ever possible?" Melville is very much the anti-idealist in a work like The Piazza in which one valley dweller imagines existence on the upper slopes to be grander than his own only to travel there one day and be made aware of the opposite. So there is no dreaming colonist in Melville, in him we have a measured study of ourselves as we were in his day, and perhaps still are, a dreaming people,a restless people with only the vaguest notions of what life and its true nature is. The strangest story in this collection is Benito Cereno which is perhaps the work which most defines a democratic nation's uneasy alliance of peoples and points of view. In that work there is no one defining perspective, only differing views of one event that remains disturbingly unclear as all of Melville's worlds are. In Melville we have an author defining what we are or perhaps more importantly what our problems will be in the future. Interesting short works full of that rare kind of insight that does not seem to be trapped in its time but somehow seems to have seen what is to come. There is the idea that a new nation has of itself and a confidence that in the works of Melville is challenged. The mystery in these works is the mystery at the heart of existence and life remains inscrutable even here in this new land with its new ways. In Moby Dick the innocent Ishmael is the only one spared, in Billy Budd(Melville's last tale) the innocent is the one sacrificed. Melville's vision is not a comfortable one. The strange Bartelby,the Scrivener is a tale where personality is consumed by an impersonal system. The story strikes an odd alienated tone which will later be taken up by Kafka and Pynchon and countless others.

THE Collection to buy...

Published by Thriftbooks.com User , 20 years ago
This edition of Melville's short fiction is, I think,the best...certainly a real bargain at this price.In this one volume, the reader gets all of Melville'sshort fiction -- plus the novella, *Billy Budd, Sailor*(the Harrison Hayford/Merton M. Sealts, Jr. "definitive"Reading Text published by the Univ. of Chicago in 1962).The collection is edited and has an excellent "Introduction" by Warner Berthoff. The selections are each preceded by a very informative"Note" which tells you when the piece first appearedand in what periodical. Berthoff also supplies in each"Note" delicious suggestive context insights...whichhelp the appreciative/analytical/interpretive processbegin to percolate. The 1st selection is "The Town-Ho's Story" (achapter from Melville's novel *Moby-Dick*). Butthis chapter was printed in *Harper's New MonthlyMagazine* in October 1851 (according to Berthoff's"Note")as a portion of a work-in-progress.The collection presents the pieces in the CHRONOLOGICALorder of their publication in various magazines.But it also contains "The Two Temples," whichBerthoff says was rejected for publication. So,the collection contains all of Melville's "short"fictional pieces, including prose pieces meant toaccompany poems. These pieces in the collectioninclude: "The Marquis de Grandvin," "Three 'JackGentian Sketches,'" "John Marr," and "Daniel Orme."The collection concludes with *Billy Budd, Sailor." All of the *Piazza Tales* are in this collectionalong with "The Piazza " piece, itself. This is a fine collection. The Northwestern/Newberry editions of Melville's works are nice,but expensive. And you would have to get 2separate volumes to also get the *Billy Budd,Sailor* which you get included in this onevolume. However, what the N/N edition of Melville'sprose pieces gives you which this collection byBerthoff does not (their title is: *The PiazzaTales and Other Prose Pieces: 1839-1860*)are:"Fragments from a Writing Desk" (1839), Melville's inspired essay of idolatry andinsight, "Hawthorne and His Mosses" (17 and 24Aug. 1850), many other uncollected pieces,Melville's reconstructed lectures from hisstint as a public speaker/"performer" (Yikes!)"Statues in Rome," "The South Seas," and "Traveling." There are also copious notes,scholarly information, photo facsimiles,and other helpful items in the N/N edition. But, unless you are a scholar, a Melvillefanatic, or financially unfrugal, BUY thisedition by Berthoff and published by thePerennial Library of Harper & Row. * * * * * * * * *

Published by Thriftbooks.com User , 21 years ago
Melville is, of course, best known for his epic novel Moby Dick, but he also wrote some great short fiction, including Billy Budd and Bartleby.In Bartleby, he may have written one of the first significant pieces of literature to give voice to the dehumanizing aspects of the modern industrial compartmentalized workplace. Has there ever been a less desirable job title than scrivener? They were employed by lawyers to transcribe legal documents, and if that isn't inhuman enough, the office in which Bartleby works has windows which face the brick walls of surrounding skyscrapers. Bartleby mystifies his employer, our narrator, first by refusing to assist in proof reading documents, averring "I would prefer not to." But in short order he is preferring not to do most anything, including leave the building after he is fired. Bartleby is finally removed by the police and starves to death in the Tombs, preferring not to eat.Melville keeps Bartleby, like Moby Dick, shrouded in mystery. The only explanation offered for his behavior is that he was forced to leave his patronage job in a dead letter office when administrations changed over. This leaves the reader free to freight Bartleby with any significance one desires and makes him a truly haunting figure.GRADE: A

Melville, a commentator on a rising America

Published by Thriftbooks.com User , 24 years ago
Not only did the Great short Works of Herman Melville offer some intelligent reading, but offered some insight into an emerging America. In this collections of Melville's masterpieces, one may find commentary on American's changing position and economy. A partiular example may be found in the story "Bartleby, the Scrivner, the story of Wall Street." Here, Melville shows how America's mind is turned toward wealth and starts to reject the traditional and religious ways of life once known to New York City. Not only does the story of Bartleby show Melville's ability to comment on a changing nation, but the other stories of the book carry a similar feel. Through its wonderful collection, the Great Short Works of Herman Melville captures the essence of Melville, the man.
Copyright © 2020 Thriftbooks.com Terms of Use | Privacy Policy | Do Not Sell My Personal Information | Accessibility Statement
ThriftBooks® and the ThriftBooks® logo are registered trademarks of Thrift Books Global, LLC