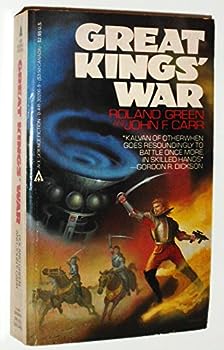 (Part of the Paratime Police Series and Lord Kalvan (#2) Series)

The characterizations, military lore and exciting plot make this a stand alone novel to be enjoyed on its own merits. We had to wait many years for this sequel. This description may be from another edition of this product.

Published by Thriftbooks.com User , 17 years ago
H. Beam Piper (1904-64) was one of the premier science-fiction authors of the 1960s, and should rightly be considered one of the all-time greats in that field. Among the wonderful books that Mr. Piper published during his all-too-short career was Lord Kalvan of Otherwhen. In that book, a Pennsylvania State Trooper name Calvin Morrison is accidentally lifted out of his own space-time continuum, and deposited on a parallel Earth, where some of the Aryans went east, across the Pacific and into North America. Dropped into the midst of a war of conquest, directed by a religion that holds a monopoly on gunpowder, Calvin must use his knowledge of military history to save himself and his new friends. In this 1985 sequel, Piper fans John F. Carr and Roland Green take us back to the world of Lord Kalvan. Having saved his new nation of Hos-Hastigos from destruction only last year, Calvin Morrison (now Lord Kalvan) now finds a new campaigning season upon him. But, the House of Styphon is not about to see this new force put an end to their gunpowder wealth and authority. And now, Kalvan must prepare to meet an even greater threat, and once more use his knowledge of military history to save a seemingly impossible situation. Now, I am a massive H. Beam Piper fan, so I went into this book with a little trepidation. I mean, can anyone write a book in Piper's universe with anything like the right feel to it? Well, in fact this is an excellent book - well written and a worthy sequel to the original. All of the characters are here, but they have grown and changed, just like you would expect real people to do. The action is almost non-stop with some excellent battle scenes and tons of action and adventure. So, if you are a fan of H. Beam Piper, or just his Lord Kalvan story, then you should get this book. It's great. Also, if you are a fan of alternate-reality science fiction, then this book is something you should consider - but definitely read Lord Kalvan of Otherwhen first.

God, what a read!

Published by Thriftbooks.com User , 19 years ago
In the top 5 of military sci fic/fantasy books I've ever read! I stumbled across this book years ago and could not believe it was so faithful to the orginal story by H Beam Piper (Lord Kalvin of Otherwhen) Its a fascinating period of Terran history grafted onto a realistic alternate world and done with style and swerve! I have written both Mr Carr & Green about the followup but it seems stalled. Both of them did their research on this one however and it shows. No miracles from the "real" world to help, tons of political intrigue, realistic characters etc etc. For anyone who likes good deep stories and hard realistic fighting will enjoy this read. You can actually smell the gunpowder and hear the thunder crash of steel on steel! (Aug 2006 update) This book has been expanded with the addition of some 100 or more pages. The expanded version is really worth the purchase price(from Pequod Press) It explains more of the political situations Kalvin is facing and the internal wrangling of the opposing Styphon's House and its allies. Even the battle scenes get some additional work and unlike some of Carr's work this time he does a good job of illustrating the complexities of the fighting. We also see the character and background of mercenary captain Philidestro get more mention. There is alot more insight into the Paratime home culture and it's politcal ramifactions in Kalvin's timeline. Though either version is a must read, this new edition is the better money spent! Mr. Carr has done some excellent work here!

Published by Thriftbooks.com User , 22 years ago
I have owned a copy of this book for five years, and reread it at least once every month or so, along with my ancient copy of 'Lord Kalvan of Otherwhen', of which it is a sequel. The book deserves to be reprinted, plus, its two sequels, of which only a hint has been published - a chapter in a Jerry Pournelle anthology indicating that all is not well in Hostigos. The characterisations, military lore and exciting plot make this a stand alone novel to be enjoyed on its own merits. We had to wait many years for this sequel, I hope that the authors of these posthumous tributes to Piper's Paratime Universe will soon find publishers for their next works.

Where is the Sequel!

Published by Thriftbooks.com User , 22 years ago
I first read Lord Kalvan when I was about 8, I searched for years for the sequel. When I found Great Kings War I managed to read it in a few hours....that was back in 87 and I've hungered for the next one since. I even wrote Pournelle and Carr asking about if the excerpts printed in the Men at War series would be published and fleshed out. I was assured they would be but that was back around 93. Till then I simply keep rereading and hoping.....I rate this as one of the best series to ever come out, in league with the CoDominion and the Draka series.

Published by Thriftbooks.com User , 23 years ago
This is a very rare book,There are a very few Alternative histories novels which approach the feel of this novel. It is a sequel to "Lord Kalvan Of Otherwhen" by H. Beam Piper. I feel it is just as good or maybe better than the original.
Trustpilot
Copyright © 2022 Thriftbooks.com Terms of Use | Privacy Policy | Do Not Sell My Personal Information | Accessibility Statement
ThriftBooks® and the ThriftBooks® logo are registered trademarks of Thrift Books Global, LLC