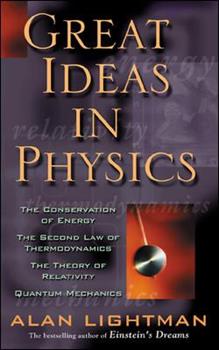 Explains the physics behind each of the four ideas - the conservation of energy, the second law of thermodynamics, the theory of relativity, quantum mechanics - and deftly untangles for lay readers such knotty concepts as entropy, the relativity of time, and the Heisenberg uncertainty principle.

I have to agree with the reviewer Jesse Engelberg...

Published by Thriftbooks.com User , 14 years ago
A book like this is sort of a double-edged sword. Sure, when dealing with the lay person whose interest in physics (and the like) is sparked more by a temporal curiosity than by a need to know, 'popular' works like this tend to cover as much as necessary in as little space as possible, and in a way that translates easily for the non-specialist. As such, I applaud Dr. Lightman for not only attempting to educate the "simply curious" on very complicated areas of science but actually doing a noble job in the process. Nevertheless, there are problems by which educators and science enthusiasts alike will simply cringe when reading (as Jesse Engelberg intimated). One example from among the questionable portions of the text will serve to prove this point. In the opening section concerning the Conservation of Energy, the author does a remarkable job in deriving many of the equations leading up to the first law of thermodynamics; however, he makes a much-too-often-committed mistake concerning molecular motion at absolute zero. From page 44 the text reads: "Zero degrees Kelvin is called absolute zero. It is the coldest that any substance can be. From [Equation (I-14){provided on page 43}], we see that absolute zero means that =0, which can be achieved only if every single molecule in the substance is motionless (aside from ordered motions). If even a single molecule is moving, then will be larger than zero, and the substance will have a temperature higher than absolute zero." Aside from the author's unexplored meaning of what an "ordered motion" is (perhaps this is the vibrational motion contended for in the following), anyone amply versed in Physical Chemistry and Thermodynamics is well aware that molecules are motionless at absolute zero only when referring to translational and rotational motion--not vibrational motion. Again, this is where a book like this would lose some of its luster by having to explain the difference to a general reader, but to say that molecules become motionless at absolute zero is utterly wrong and serves only to perpetuate misconceieved and erroneous notions of science among those reading such works for the first time. In fact, one of the fundamental tenets of quantum theory is this idea that all matter continues to execute vibrational motion, EVEN AT ABSOLUTE ZERO. It would be hard to believe that someone as educated as the author actually believes such a common, grievous error to be the case; hence, he should have qualified the statement a little more clearly by pointing out that translational and rotational motion are being referred to in the context (which of course would have demanded a longer and more arduous discussion on each type of motion) or he should have simply taken this portion out of the text. As such, I am in agreement with the final comment made by Jesse Engelberg, namely: "buy this book if you are already conversant with the physics it discusses (thermodynamics, quantum mechanics, and relativity

At last a fundamental introduction for the layman

Published by Thriftbooks.com User , 15 years ago
I am starting to self-study physics and mathematics as part of a broader interest in astronomy and cosmology. I am delighted by this book which focuses on 4 fundamental topics and explains them clearly with only algebra. This is a great intro, very pedagogical, and I don't feel cheated on the science, compared to other popularizations. I just wish there would be the solutions to ALL the exercises, and hope A.Lightman does a sequel.

Great Ideas in a Digestible Format

Published by Thriftbooks.com User , 17 years ago
Alan Lightman, Senior Lecturer in Physics at MIT and author of the recent best-seller _Einstein's Dreams_, serves up four fundamental concepts that form the foundation of modern physics in an easy-to-read, comfortable manner. Not being a physics buff, I was pleasantly surprised at the ease with which Lightman commands and communicates his subject. After developing a beginner's understanding of the conservation of energy, the second law of thermodynamics, the theory of relativity, and quantum mechanics, it is fascinating to watch each of these ideas find traction in the world around you. For those who might view physics as an esoteric field that bears no real relevance to the lives of ordinary people, Lightman encourages them to look at the impact of these ideas, not only the science of the modern world, but on the social, spiritual, and intellectual aspects of the modern era as well. By weaving passages from writers, philosophers, theologians, and social theorists, Lightman explores the wide-ranging impact that physics has had on every academic field imaginable. While some may find the text to be pedestrian and lack the hard math of more ambitious texts, this book is not geared towards experts and should not be considered anything more than a fun read for the informed. If you're ready to begin exploring the world of physics, this is a nice place to start. Just be prepared to view the world differently after you're done.

Quantum Electrodynamics for the Rest of Us

Published by Thriftbooks.com User , 20 years ago
Whether the physics in this book is perfect or not, one thing is certain: the physics is readable. This is not a book for the aspiring physicist, I made that mistake. This is a book for a person curious about some of the major developments in the subject but NOT interested in the minutia and the math behind the theory. Physics is not just for nerds with overpowered calculators, anybody can be fascinated by this stuff.
Copyright © 2020 Thriftbooks.com Terms of Use | Privacy Policy | Do Not Sell My Personal Information | Accessibility Statement
ThriftBooks® and the ThriftBooks® logo are registered trademarks of Thrift Books Global, LLC