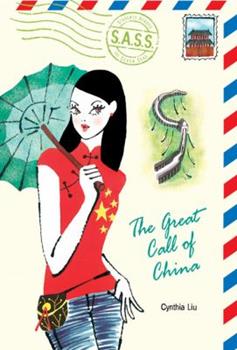 (Part of the Students Across the Seven Seas Series)

Chinese-born Cece was adopted when she was two years old by her American parents. Living in Texas, she's bored of her ho-hum high school and dull job. So when she learns about the S.A.S.S. program to Xi'an, China, she jumps at the chance. She'll be able to learn about her passion - anthropology - and it will give her the opportunity to explore her roots. But when she arrives, she receives quite a culture shock. And the closer she comes to finding...

The Closely Monitored Call of China

Published by Thriftbooks.com User , 12 years ago
Both the series' description and this individual book's description gave off a definite whiff of Teen Chick Lit, and this man's man has something of an allergy to Teen Chick Lit as far as you know. One reason is that it is fairly easy for these kinds of books to go off the deep end either into absolutely routine fluff: boys, clothes, boys, makeup, boys, school problems, boys, etc., until you want to claw your face off, or to the opposite extreme of the overwrought Serious Issue where the Teen Angst is laid on so thick that not even a mop and bucket can soak it all up -- you are going to need a bilge pump. Not that I'd have any reason to know this, man's man and all that. It's just what I've heard. Fortunately, Ms. Liu rather nicely balances the fluff with the serious here, providing not too much of either. On the one hand there's a cute boy, and Cece anguishes quite a bit over whether he notices her, why he notices her if he notices her, whether he likes her, whether he likes her roommate instead, etc.; on the other hand there's the Serious Issue: an adopted child seeking information about her birth parents, which is made somewhat unusual by involving an adoption of a baby girl from China. This juxtaposition keeps the story from dragging. If you should start getting tired of the teen love, it turns out to be time to take another step on the search for birth parent truth, and the same is true in reverse. Now, frankly, I had no doubt that the "love" story would be brought to a happy conclusion -- I believe it's the law in Teen Chick Lit. However, Ms. Liu kept me guessing to the end about Cece's quest for truth; it was never clear that she would find out what she wanted to find out or that she would like what she found. I also liked the way Ms. Liu played around with stereotypes; the Prada-wearing, Gucci-toting, Asian Brat Pack member with the rule about never dating Asian boys turns out to have a lot more depth (and character) than expected by the end. In fact the only sour notes in this symphony of words occur in the area of politics, my particular bailiwick, and I don't even think they were Ms. Liu's fault. Frankly, I'm amazed she got ANY criticism of the PRC past the gatekeepers at Penguin because unlike criticism of Nazi Germany or the United States prior to the last election, criticism of the PRC is not something likely to attract universal agreement at a mainstream publisher. The trouble is that in the perhaps necessary bending over backward Mrs. Liu was forced to go through, a few clanks were struck that I feel compelled to respond to. "As far as Cece knew, one of the goals of communism was to eliminate oppression." According to whom? The communists? It would be more accurate to say that one of the goals of communism was to eliminate OPPOSITION. "Like the government's family policies, it was another of those issues Cece didn't quite understand." Only if she was TRYING not to understand, or more likely, those with responsib

Published by Thriftbooks.com User , 12 years ago
This book is a bit of a mixed bag -- mostly very good. I enjoyed the descriptions of China and I learned much about the culture and history of China. The tale of adopted Cece's search for her history is touching and well written -- a pleasure to read. I was less impressed by the more typical teen fare included in this book -- descriptions of how Cece's butt looked in her jeans, for example. I'm wondering if that's the story the author really wanted to tell or if this was necessary tailoring for the S.A.S.S. series (it's the only one in the series I've read, so I don't have anything to compare it to). I'm an older reader, not the target audience. I'm guessing older tween and teen girls would enjoy this even more than I did.

A YA novel with real substance...Take me to China!

Published by Thriftbooks.com User , 13 years ago
How refreshing! A teen novel where everyone isn't obsessed with clothing brands and sex! In the Great Call of China, the main character, Cece, who's an adopted teen, has more important things to focus on. She wants to learn more about her heritage, maybe even find her birth parents! Reading Cynthea Liu's enthusiastic depiction of Chinese culture, as well as the intersection of Chinese and American cultures, made me want to hop on a plane tomorrow. I especially liked reading about the Terra Cotta Warriors in Xi'an. Liu's secondary characters in the book deserve a shout-out; my favorite was Jessica, a Chinese-American who struggles to follow her own dreams instead of her parents' demands. Great read for teens and girls who think there's more to life than Juicy Couture and losing their virginity. A YA novel with real substance.

Published by Thriftbooks.com User , 13 years ago
I thoroughly enjoyed this book from cover to cover. I've had the chance to live in China for a time and visit many of the places Cece travels to, and I found the story to be very accurate and vividly described. Cece and her friends are well-rounded characters who are smart and interesting -- very refreshing when compared to many of the mean-spirited or gossip-oriented books available today. I intend to give this book as gifts to friends with 11- to 14-year-old daughters.

Published by Thriftbooks.com User , 13 years ago
The good and the not so good: The main story of Cece searching for her birth parents was excellent. Cece had to face her fears and by the end of the story she not only appreciated her adopted parents but also she knew the story behind her birth. She was a very believable character and I really enjoyed her search for friends and her family in China. What I didn't find believable was that she didn't have any jet lag after flying for about 20+ hours from Texas to China. I have hosted many foreign exchange students and my own two girls went to Germany and Ghana and they all needed to sleep for about two days from the jet lag. Cece barely slept and went to class the next morning. She also didn't have much culture shock. Yes, she described some of the differences in the culture, but she really wasn't shocked about it. I know that when our students go to China they have to be briefed, and many don't make it because of differences between the cultures. The rest of the story in THE GREAT CALL OF CHINA is great. Cece is a very likable character and the rest of her friends are, too. There are problems that are solved but very realistically. I would love to read more about Cece and how she adjusts to life in the states after being away. I find that re-entry into our own culture is the more difficult of the experience. My own two had a harder time coming home than going, especially my daughter who went to Ghana. She has been back for over a year and the lessons she learned there are still causing havoc in her life today. I liked this story a lot, had some problems with it, but still would rate it 4 Stars. Reviewed by: Marta Morrison
Trustpilot
Copyright © 2022 Thriftbooks.com Terms of Use | Privacy Policy | Do Not Sell My Personal Information | Accessibility Statement
ThriftBooks® and the ThriftBooks® logo are registered trademarks of Thrift Books Global, LLC