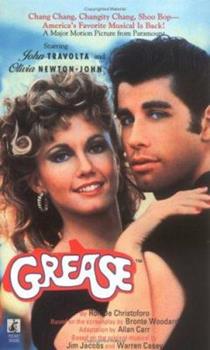 The Thunderbirds, the Pink Ladies, and Rydell High's class of '59 rumble, rock and roll, and fall in love.

A great compliment to the movie

Published by Thriftbooks.com User , 20 years ago
Any Grease enthusiast will enjoy this book. Don't expect it to be just like the movie. There are little twists in the story and a few characters who were not in the movie (Marsha and Roger). This is more of a depiction of what the movie would have been like if it had actually happened. Plus, you get a little more insight into what the characters were feeling and thinking, which can be dificult when told in thrid person perspective (Sonny's point of view). A must read for Grease fans

Published by Thriftbooks.com User , 23 years ago
The book is quite different from the film but it is nice to here it from Sonny's point of view. I would recommend it to "Grease" fans.

Why it's Greased Lightnin'!

Published by Thriftbooks.com User , 23 years ago
THE SHOW, COOL. THE SCREENPLAY, BETTER. THE MOVIE, PERFECT. THE BOOK ABSOLUTLY BRILLIANT. AFTER READING IT YOU'LL FEEL NO NEED TO SEE THE MOVIE.

Living Proof That The Movie And Book Are Never The Same

Published by Thriftbooks.com User , 24 years ago
I first read the Novel of Grease shortly after going to see it at the Movies when I was about twelve years old. I have to admit that while I will always love the movie version, the book version was fun to read because the kids were always very supportive of one another. In the book, we see that Danny is much more tender around Sandy than in the movie and we also see how supportive the T-Birds and Pink Ladies are when Danny returns from his Summer Romance with Sandy in a deep depression. Although Danny does act like a jerk when they are reunited because he doesn't want to lose his cool around his "boys" deep down, he is a nice guy with his own insecurities that he doesn't want to display. The only strange thing I have to admit that I had a hard time with was reading about characters that weren't in the movie such as Marsha, Sonny's Girlfriend and Roger Mooner Extrodinaire who also knew about cars like nobody's business but all in all, it's a fun read for any die hard Grease fan.

A must for Grease fans

Published by Thriftbooks.com User , 24 years ago
This book is a must for fans who still believe that Grease is still the word. It don't only follow the T-birds and Pink Ladies through school but it starts out in the summer. I love the perseptive that it is being written from, that being Sonny the T-bird. It is from the original screenplay so don't expect none of the music from the movie. I am only half way thrpough it and have only come across one song, and parts of another. If I was watching the movie I would already drowned out with tunes.
Trustpilot
Copyright © 2022 Thriftbooks.com Terms of Use | Privacy Policy | Do Not Sell or Share My Personal Information | Accessibility Statement
ThriftBooks® and the ThriftBooks® logo are registered trademarks of Thrift Books Global, LLC