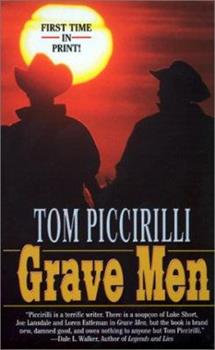 First time in print! Five years ago, Priest McClaren and his younger sister, Molly, were forced to watch as a desperate pair of outlaws murdered their parents. Though one is dead, the other, Yuma Dean, remains at large. Now Molly is a bounty hunter and Priest a store owner. When Molly must give up the hunt, it falls to Priest to track down Yuma Dean and make him pay.

Published by Thriftbooks.com User , 17 years ago
GRAVE MEN By Tom Piccirilli Genre:WesternPriest McClaren is a haunted man, haunted by the death of his parents by the hands of two bank robbers, haunted by the fact that his sister killed one of the robbers when he couldn't, haunted that Molly had decided at the age of 12 become a bounty hunter to hunt the surviving killer Yuma Dean whilst he stayed behind and let her do it. Now Molly is coming back to the town of Patience and so is Yuma Dean who is going to hook up with the Septemus Hart, father of Priest's partner, ex-slave and ex-Union solder Lamarr. Septemus Hart runs the town with the help of his top gunhand Griff who is a friend of Yuma Dean. I'm not going to say anything more about the plot because it would spoil it for others who might read this fantastic book. The characters are brilliantly drawn by the author and the story is gripping from the start, there is a lot of humour which I enjoyed a lot especially the banter between Priest and Lamarr, the book is written in a really original way which was really enjoyable but weird, this book was very dark in places, I loved it!. Excellent read and highly recommended, Read it if you can.

Published by Thriftbooks.com User , 18 years ago
Readers probably know the author of "Grave Men," Tom Piccirilli, for his horror novels and short stories. As this western yarn proves, Piccirilli is a versatile writer capable of penning engaging tales in completely different genres. To be frank, after reading this book and a couple of Piccirilli's horror novels, I would rather read his westerns any day. I doubt whether readers interested in outlaws and gunfights would accept the fractured organizational schemas and confusing narratives found in "The Night Class" or "The Deceased." I have read a short story from this author that was most intriguing and quite understandable, but his jaunts into the world of horror go completely over my head. It's not that Piccirilli is a bad writer, as nothing is further from the truth. In fact, this author can create scenes that are wonders to behold, scenes conveying whole spectrums of emotion. When it comes to forging this scenery into a coherent whole, at least with his horror novels, Piccirilli falls flat. In "Grave Men," Piccirilli lands solidly on his feet with a great revenge story set in the Old West.Within a few pages, the reader becomes instantly familiar with protagonist Priest McClaren. This young man has a whole host of problems in his life, from a pregnant sister who works as a bounty hunter, an aging grandfather whose mind is starting to go and who thinks he is an Apache Indian, an Irish singer who wants to marry him, and an ex-slave companion named Lamarr who gambles away the money McClaren needs to open a store in town. Complicating matters is the presence of Septemus Hart, a wealthy ex-Confederate Army officer who has both hands on the purse strings of Patience, the town where Priest lives. Moreover, Septemus and Lamarr share a secret that always makes Priest's life more difficult. Priest is trying to move beyond a terrible incident that occurred in his childhood, when two outlaws gunned down his mother and father in front of him and his sister. After years of attempting to drown the memories of this horrific event in a liquor bottle, McClaren finally sobers up and plans to make something of his life. He still harbors a burning hatred for Yuma Dean, the opium addicted killer who slew his family, but with his pregnant sister Molly on the way home for a visit Priest realizes he must seek out Yuma Dean himself in order to clear away the scorching memories of the past.There are some great scenes in this book. Piccirilli's description of the town brothel and the thug who works there as the bartender/bouncer is aces, as is the history between Lamarr and Septemus. Even the opening of the story, with Priest McClaren watching his new store burn to the ground, works because it helps establish the essential character traits that constitute McClaren. He's a guy who can't escape his past, and until he resolves the issues surrounding the death of his parents he won't be able to move on with this life. Piccirilli describes in detail the unfortunate series of e

Made a fan out of me

Published by Thriftbooks.com User , 19 years ago
Okay, I've never read a so-called real western in my life before. I've liked the horror-westerns I've read before by the likes of Joe Lansdale and Richard Matheson and anthologies like Skull Full of Spurs and Razored Saddles, but this is the first straight one ever. And I loved it. Pic has a real flare for dramatic detail that makes a story come to life in a way few others ever do. You can feel all the turmoil the characters must deal with, and the humor is witty and realistic and powerful on a number of levels. Priest & Lamarr are more than friends...they're partners and soulmates of a sort who help to shore up each other's faults when the time comes. The other characters are equally unique, passionate, weird, and funny. Imagine a Grandfather who is crazy and sometimes believes he's an Apache. A teenage girl gunslinger, who's pregnant to boot. A welathy landowner who respects his black son but refuses to acknowledge him. Add into the mix a red-light house, a blood debt that needs to be paid, and two heinous killers, and you've got one incredibly fast but involving story. Definitely pick it up.

Published by Thriftbooks.com User , 19 years ago
This book takes western stereotypes and really spins them on their ears. Grave Men is by turns dark, moving, complex, and humorous, and it's like nothing you've ever read before in the western field. The story concerns Priest McClaren, a somewhat reformed drunk who watched his parents die five years earlier at the hands of two desperadoes...In a bizarre showdown finale, all these strange elements come together in a wonderfully readable action-packed style that will knock you out of your seat.If you're a fan of Joe Lansdale or Ed gorman (both of whom blurbed the book) you'll love Tom Piccirilli's take of westerns in Grave Men.
Copyright © 2020 Thriftbooks.com Terms of Use | Privacy Policy | Do Not Sell My Personal Information | Accessibility Statement
ThriftBooks® and the ThriftBooks® logo are registered trademarks of Thrift Books Global, LLC