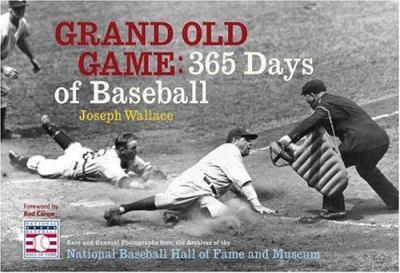 Baseball is the great American pastime, and every year millions of people follow the annual rituals of their favorite teams. Ranging from the turn of the 20th century to the mid-1960s, this unique collection of 365 rare and timeless images from the National Baseball Hall of Fame's archives evoke the familiar rhythm of baseball's yearQfrom the off-season through the World Series. 0-8109-5594-6$29.95 / Harry N. Abrams, Inc.

Published by Thriftbooks.com User , 14 years ago
I rank this book five stars as I did for the author's companion volume mainly for the photographs. It is interesting to take note of the way fans dressed at ball games (suits, ties, and bowler hats). I also found it interesting to see photographs of players not in uniform from my initial decade of baseball interest, the 1950s. I would like to point out three dates (the method in which the pages are listed). June 14th shows three fans, two of which are a young girl and boy with pop bottles about seven years of age expressing their displeasure at an umpire's call. October 27th shows Leo Durocher's son giving The Lip a kiss. Author Joe Wallace states "no one since Babe Ruth left a bigger mark on baseball than Durocher." Wallace obviously forgot about Jackie Robinson. November 27th shows a group of Little Leaguers at a tryout camp in Scarsdale, New York in 1959. Somewhat below the center of the photo is a boy wearing a catcher's chest protector with a bent elbow extending his middle finger on his right hand. The book provides a good mixture of photographs from each decade from the beginning of the 20th century through the 1950s. A few of them I have seen in other books, but for the most part, the photographs are new to me. This is a very worth while photographic book on baseball history.

From the author, Joseph Wallace

Published by Thriftbooks.com User , 15 years ago
In putting together GRAND OLD GAME, I got to spend weeks rooting through the photo archives of the National Baseball Hall of Fame Library in Cooperstown. I loved it! It was a true treasure hunt, allowing me to find hundreds of photos that hadn't been seen in decades--if ever--and put them in this book. Even the biggest fan of baseball history won't ever have seen most of these photos before. I know I hadn't. There was just one downside: many of the old images had incomplete or inaccurate captions, or even no captions at all. I chose to use these photos anyway, because they deserved to be seen. Then both I and a team of professional baseball researchers (who checked every caption) worked very hard to correct mistakes and identify mystery players. In many cases, we did--but sometimes, clearly, we didn't. (I wish I'd had M. Fimoff there, since he/she is clearly so knowledgeable!) Recognizing the possibility of mistakes, I included a paragraph in the book's foreword, asking anyone with further information about the images to please email me through my website. That offer is still open, of course. (You can find the URL in the book.) The information will go into the collection of the Hall of Fame and into future editions of GRAND OLD GAME, and you'll have the pleasure of knowing you've added to baseball's rich history. Thanks--J.W.

Published by Thriftbooks.com User , 16 years ago
Great customer to deal with. Shipped promptly. Would buy from again! Thank you!

A Trip Back in Time

Published by Thriftbooks.com User , 17 years ago
This is one of the most entertaining and clever books I've come across. The idea of presenting rare baseball pictures in a photo album format with short-paragraph captions is brilliant. And rare these photos are! I own many books of baseball photography, and there's not one picture in this book that I've seen before. These photos take you back in time and give you an excellent look at what baseball was like throughout the early decades of the 20th century. The most amazing and provocative photos are the ones depicting people standing outside a newspaper office or on some main street watching a mechanical scoreboard that's re-creating what's happening in some far-off baseball game. There are many of them from different decades (1910s, 1920s). What I find fascinating about them is if you look at the mechanical scoreboard--which consists basically of a diamond, wooden players that move around the bases, the teams' lineups, and a linescore--it resembles exactly what baseball fans see on their computer screens today when they click on any of the Game Tracker apps to follow a ballgame over the Internet. To me, these pictures represent the fact that you can make the delivery system more high-tech and faster, but, in the end, baseball is still the game it was 80 or 90 years ago.
Trustpilot
Copyright © 2022 Thriftbooks.com Terms of Use | Privacy Policy | Do Not Sell My Personal Information | Cookie Preferences | Accessibility Statement
ThriftBooks® and the ThriftBooks® logo are registered trademarks of Thrift Books Global, LLC