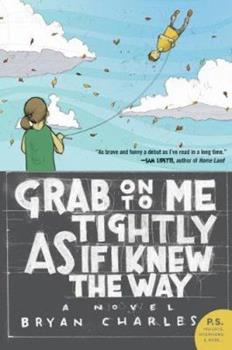 Grab on to Me Tightly as If I Knew the Way

A wise, bighearted, and hilarious look at one teenager's life by a remarkable new voice in contemporary fiction It's 1992, and as Vim Sweeney deals with the recent end of his high school career and the uncertainty of his future, America shares his angst. In Seattle, Kurt Cobain reeks of teen spirit. In Washington, George Bush (the first one) has just finished rattling his saber at Saddam Hussein. And in Kalamazoo, Michigan, Vim is trying to put off...

Jack Daniel's and ginger ale and another Bell's...

Published by Thriftbooks.com User , 14 years ago
You can get as mad about it as you want to, but this schizophrenic generation needs a pop writer the way Charles does it, someone who loves the stuff he hears and wants to mix with it, not just watch it sullenly with his mouth open, or plot some matchbox future adjacent to it. Like going to a really good concert with a friend's memories next to your own. Buy it.

Published by Thriftbooks.com User , 15 years ago
I lost myself in Grab on to me Tightly As If I Knew the Way. I related to this story on so many levels and the parts that I did not relate to I was drawn in because of the depth of the emotions felt through the writer's musical style. This novel is a great coming of age story and I laughed outloud quite often! It is not the sappy drama one might be used to associating with coming of age stories. It is told in such a smooth manner that you feel like you were there with the characters. I will recommend this book to everyone I can for a very long time. I think everyone can take something away from this book. It really made me think about life. Grab on to it tightly...TODAY!!!

Published by Thriftbooks.com User , 15 years ago
Bryan Charles is what I call a Charmer: he wraps you around his finger and then has his literary way with you. Do you look up after reading his entire book in one sitting and feel disoriented and bemused and a little sad that the story you were just a few short moments ago immersed in has now disappeared back into the ether? Yes. Is that a bad thing? C'mon, that's the bittersweet moment every reader lives for! The bottom line is Grab On to Me Tightly as if I Knew the Way is an outstanding, more than just a little magical book and sure to please anyone who appreciates such things. I hope that includes you.

Published by Thriftbooks.com User , 15 years ago
It's a strange read with an audacious collage method during which a pretty ordinary coming of age novel gets derailed every page or so by a hjolt of flash-fiction prose poem barrage of Bob Mould-Rimbaud-Wallace Stevens-Bob Dylan "Tarantula" poetry, so your Bud Lite is getting spiked with shots of absinthe. I liked it a lot and I'll bet, after the shock, you will too. It's not that you haven't read this tale a million times before. Two teens, Vim and Wheeler, play in a band called the Judy Lumpers and find their friendship tested when Vim falls for his best friend's girlfriend, the world-weary and mysterious Helene, whose Bible is Burroughs' novel NAKED LUNCH. The torment of loving a girl who "belongs to" another drives Vim deeper into an alcohol and drug fugue state which, in Kalamazoo, Michigan in 1992, seems to be the status quo for all the newly graduated seniors, except perhaps for Vim's bete noire, the hyped up ballplayer whose future is so obviously bright that Vim can't stand to contemplate it, Derek Jeter. Bryan Charles is wildly ambitious, but has he the mojo to pull off everything he's trying to accomplish? Different readers will have different answers. I liked his combination of John Hughes meets David Lynch. Reading it is like taking a wild, delightful and sometimes dusturbing trip through a teenage wasteland of narcissism and real vision, but at the same time I did feel that Charles is pandering to a certain fantasy element by having the mopey Vim so unexpectedly successful with women of every stripe, like a movie hero. One maybe. But multiple sex partners, not this guy. Maybe in Michigan however, so add a star if you're from the area. The best of his writing is wonderfully over the top in a grand, old school vein of experimental, symbolist jazz riffing, like Hart Crane or Kerouac. "The gas station with one pump and no attendant and a self-service sign. The radio static. The wind. The sense of oneness and wonder and contentment. The way it never lasts. The way the future can't be lived, it only hovers before you, everywhere around you, like a note of music, a guitar chord struck." While on the one hand it seems absurd that a graduating high school senior would be waxing so wisely about what the future brings and what it doesn't, on the other hand Bryan Charles' prose is so beautifully wrought, so precise and heartfelt, it might bring tears to a stone. I'm eager to see what the future holds, maybe not for his characters, but for him as a stylist, as an American novelist of the first water.

Published by Thriftbooks.com User , 15 years ago
Vim Sweeney is 18, fresh out of high school, plays in a band, and is dying to get laid. Thus far the generic. From here Bryan Charles's novel takes a sharp and blessed turn away from the generic, avoiding the predictably deadened, Prozac-muted tone affected by many younger writers who appear scared to admit to caring about anything. Charles takes you for an enjoyable, nicely paced roller-coaster ride through Vim's consciousness, awash in longings and confusion. The adolescent voice is authentic. Vim is intense as only 18-year-olds can be, yet the inflated adolescent sense of self and the occasional vituperative outbursts are perfectly interleaved with keen-eyed observation of the caperings of himself and his fellow mortals. No one is immune, not even the object of his lust, his bandmate's girlfriend - a girl whose arms are scarred from repeated self-mutilation. Vim's wry awareness of the human comedy makes for a terrific read. Robertson Davies would be proud. As in many first novels, there is at times a sense of long-held fantasies getting fulfilled, but it can also be deeply affecting, particularly near the novel's end, when Vim at last finishes a letter (one presumes, never sent) to his absent dad. The wry comic tone gives way,and we find ourselves in the emotional heart of the book. The novel feels genuine, not the product of some formulaic writing workshop, and as such I warmly recommend it.
Trustpilot
Copyright © 2022 Thriftbooks.com Terms of Use | Privacy Policy | Do Not Sell My Personal Information | Accessibility Statement
ThriftBooks® and the ThriftBooks® logo are registered trademarks of Thrift Books Global, LLC