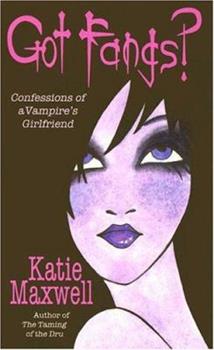 by Katie Maxwell and Katie MacAlister

The first book of a new paranormal series by the bestselling author of The Taming of the Dru follows a girl, stuck in the middle of Hungary with her mother, who meets Benedikt--a vampire with a cool motorcycle. Original.

A YA Vampire Story Perfect For All Ages

Published by Thriftbooks.com User , 16 years ago
Francesca (Fran) is currently touring Germany with a Goth Faire, courtesy of her mother, who is a witch. After her father had what she kindly refers to as a midlife crisis, Fran was sent to stay with her mom--who is finally living her dream, living with people who are just like herself, seeing the world, and having fun. Unfortunately, the Faire has caused Fran to feel like even more of a freak than she did back home--not only is she six feet tall with dark hair and pale skin, but she's been cursed (blessed?) with the ability to read thoughts and feelings in other people just by touching them. After buying a horse on a spur-of-the-moment trip away from the Faire grounds, her mother ropes her into a mission--Fran can keep the horse if she gets a job with the Faire to pay for his feed and vet bills, and if she helps the Faire owners, Absinthe and Peter, find out who's been stealing from the nightly take. She sets off to become an apprentice of Imogen, who reads palms and runes, as her job, and embarks on a Nancy Drew-ish mission to casually touch each individual who's had access to the safe. During all of this she runs into (literally), Benedickt Czerny, who is Imogen's brother and who also happens to be a Moravian Dark One--a vampire. Added to that, Ben informs Fran that she's his Beloved, the one woman destined to redeem his soul. As she's reeling with all this implies, her investigation leads her to think that evil is in the camp, that someone has not only been stealing money but is planning on killing Ben. As Fran and Ben begin a relationship, Fran begins to see that she's not a freak and an outsider, but someone who just might have more in common with the people of the Faire than she ever thought. Katie Maxwell has written a funny and entertaining vampire story that's perfect for all ages. The mystery into the thefts and who wants to harm Ben is perfectly woven, and the last chapter definitely leaves it open for more stories starring the Dark One and his Beloved. An overall excellent read!

Published by Thriftbooks.com User , 16 years ago
This book is just dazzling! Katie Maxwell has written this book in a very contemporary way and it is sure to make you laugh. Some parts are pretty funny, some pretty serious, and some are pleasant and entertaining. In my opinion, all the best scenes in this book are when Fran, the main character, and Ben, vampire boyfriend, are together whether they're arguing, having a nice chat, or when they're having some serious romance. Even when they talk telepathically, it's nice reading their romance. One thing I enjoyed about this book is Maxwell's ability to create a unique vampire world as her own. There's much information regarding this world of vampires that makes the book very interesting. Lots of the character are gifted with some sort of power whether they're a witch, mind-reader, magician, demonologist, or can just make a good friend. The characters are very funny and enjoyable. My favorite character is Ben. You'll have lots of fun reading this book! the audience most required for this young adult and this is a quick-reader and doesn't take forever to read. Pick it up in your spare time, and it's one you won't regret!

something to sink your fangs into!

Published by Thriftbooks.com User , 16 years ago
YA is not my choice of reading, being long past YA days. However, I find adults reading Maxwell's YA by the carload so I am not alone. Why? They are just that funny! Surprising, Katie Maxwell (who also write an amazingly number of novels each year as Katie Macalister) recalls the "inner teen" and is able to write to teens without talking down to them. The results are YA books that entertains everyone. This time she has taken her Darks Ones theme (very popular under the Macalister name - A Girl's Guide to Vampires; Sex and the Single Vampire; Sex, Vampires and Lies for Dorchester Publishing)and now gives the teen a version of the Dark Ones aimed at them. It's a howling good time that everyone will love!

Published by Thriftbooks.com User , 16 years ago
This is the first thing I have read by Ms. Maxwell (who also writes as Katie MacAlister) and I have to admit that it had me hooked from page one. The very premise of a teen discovering that she is the "Beloved" of a vampire was absolutely great and the author carried this off very well. I am looking forward to reading more about Fran and Ben as the series continues. Excellent!!

Katie Maxwell Has Done It Again!

Published by Thriftbooks.com User , 17 years ago
Sixteen-year-old Francesca (Fran) Getti has never wanted anything more than to have a normal life, and to simply blend in with other kids her age, that way no one could ever figure out just how much of a freak she is. Unfortunately, that's too much to ask for, since she has now been dragged off to the middle of Hungary by her mother - a witch - to join a traveling band of magicians, psychics, and other oddities, called GothFaire. If this weren't enough, Fran is now forced to be the "normal" one amongst a bunch of freaks; while at the same time try to face her fate as a psychometrist - someone who need only touch something to know strange facts. Things are looking down, until Fran meets a Moravian Dark One - a.k.a. a vampire - named Benedikt, who insists that Fran is the key to redeeming his soul. Throw in an immortal friend who remembers what Mozart was like, a mysterious horse with a strange past, and a demonologist who thinks he's Elvis, and you can see why Fran has absolutely no chance of fitting in. Ever. I have been a fan of Katie Maxwell since the release of THE YEAR MY LIFE WENT DOWN THE LOO, yet her amazing writing still amazes me. Each book she writes is just as good, if not better, than her previous one, and GOT FANGS? is no exception. Fran is a hilarious character, whose hectic life, and demented mother and friends, will drag readers into this novel, and not let them out until the very last page. Whether you're a fan of Katie Maxwell's or not, GOT FANGS? is a book that can't be missed! Erika Sorocco Book Review Columnist for The Community Bugle Newspaper
Copyright © 2022 Thriftbooks.com Terms of Use | Privacy Policy | Do Not Sell My Personal Information | Accessibility Statement
ThriftBooks® and the ThriftBooks® logo are registered trademarks of Thrift Books Global, LLC