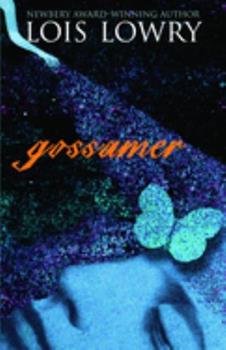 Littlest One is a tiny creature slowly learning her job of giving dreams to humans. Each night she and her teacher, Thin Elderly, visit an old woman's home where she softly touches beloved objects, gathering happy memories, and drops of old scents and sounds. Littlest One pieces these bits together and presents them to her sleeping human in the form of pleasant dreams. But the dreaded Sinisteeds, dark fearsome creatures that plague their victims with...

So good it gave me goose-bumps

Published by Thriftbooks.com User , 15 years ago
My 11 year old son and I listened to Gossamer driving to and from school. But then we couldn't bear to leave the story behind, so spent the rest of the afternoon huddled around the tape deck. What an enchanting coming of age story. Yes, there is darkness and violence, but such feeling of hope. I cried through the last chapter. Wow. This is an incredible book. And beautifully read by Ms Twomey. I was especially drawn to the idea that so much can be experienced through touch. Seems to me it's the sense most writers underplay. And the writing is so simple, yet so powerful. I would give Gossamer more than 5 stars if I could.

Published by Thriftbooks.com User , 15 years ago
This was my first Lois Lowry book. I read it in one evening. Once I started it, I couldn't put it down. She is an amazing author and this story was like, to me, a fairy tale I wish could come true. As someone who suffers wtih nightmares regularly, from past traumas, I found myself so absorbed in the book and related to it so much. As someone else said, it was difficult to learn of the little boys past abuse, but this story found a way to overcome that and take us all to a hopeful and happy place. A few days later I read The Giver. Lowry is truly an amazing author and has a wonderful imagination that is so easy to relate to. I can't wait to read more of her books.

A wonderful tale of magic and dreams

Published by Thriftbooks.com User , 15 years ago
Without a doubt, Lois Lowry's books stand out when compared with some of the other fare on contemporary bookshelves --- and thankfully Lowry has been recognized for it. In 1990, she won her first Newbery Medal for NUMBER THE STARS, a fictionalized account based on the true story of how a group of Christians in Denmark saved their Jewish neighbors from persecution during World War II. She received her second Newbery Medal in 1994 for THE GIVER, probably her most well-known book to date. Now comes another book that is so beautifully written and so poignant in message that its sure-to-be glowing reception just might give new meaning to the expression "three time's the charm." GOSSAMER tells the story of a group of mythical creatures (for lack of a better expression to describe them) who are responsible for the creation and distribution of dreams. After being assigned to various households by their leader, Most Ancient, the creatures settle into their roles as dreamweavers by acquainting themselves with objects in the house (photographs, articles of clothing, trinkets on a bureau) that contain significance and memories of the owners. After they have gathered enough meaningful fragments, the dream-givers combine them to create a story, or dream, to bestow onto the sleeping inhabitants. This process is, in fact, how dreams are born. So, too, are nightmares created by the evil Hordes, who attempt to undo all the good that the dream-givers impart by banding together to flood their victims' subconscious with dark and stormy thoughts. If enough insidious nightmares are inflicted upon these sleeping individuals, their waking hours can become increasingly negative and damaging until they no longer can remember how to be happy and at peace. In this agitated state, they are a great risk to those around them and to society as a whole. In addition to providing a unique and imaginative explanation as to where dreams and nightmares come from, GOSSAMER also tells the moving story of an angry boy and a lonely old woman who are brought together under unfortunate circumstances. The boy has been taken away from his parents because his father beats him and his mother, and the woman is lonely because her husband died, leaving her alone and without many friends. As a way to find companionship and to give back to the world, the old woman agrees to take the little boy in for a summer until his mother can get back on her feet. The bond that forms between the two is so subtle yet so ripe with feeling that by the book's conclusion, you wonder how the two ever could have been apart. Lowry's latest offering is simply magical. It is clear that she has taken great care to write a narrative that will both teach and touch its readers. A book full of gentle spirit and pure beauty, GOSSAMER is definitely award-winning material. --- Reviewed by Alexis Burling

Soft to the touch

Published by Thriftbooks.com User , 15 years ago
Lois Lowry is my comfort blanket. When you pick up a Lois Lowry book (and it really doesn't matter if it was "Anastasia Krupnik" or the book I will discuss with you now) you are blessed with the knowledge that this book will fufill the following requirements: It will be good. It will be interesting. It will be wholly original. Lowry has never tapped into our subconscious oddities quite like other authors (like Diana Wynne Jones) have. She doesn't need to. Her books are perfectly thought out little worlds. If you are lucky, they may have some fantastical elements to them, but rather than stand out from the text these elements are as natural as can be. Lowry makes you believe in a kind of real-world magic. And no book better illustrates that idea than the remarkable little, "Gossamer". A comfortable amalgamation of the fantastical and the all-too real, it's one of those rare stories that can claim to have both grit and charm. An old woman lives with her dog, all by herself, in a two-story house. Unbeknownst to her, she is visited nightly (as are we all) by creatures that make us their business. In this particular case, two such creatures have visited the old woman. One is an old hand at the work they are going to do. The other is known simply as Littlest One. She is sprightly and curious and filled to brimming with questions. By night, these creatures gather the memories they find attached to objects around the home and create dreams out of them. These they bestow to the residents of the home. Only now, the old woman is taking in a foster child for a time. An angry eight-year-old boy with an abusive past and who's dark thoughts prove irresistible to the Sinisteeds. Sinisteeds are creatures that provoke dark nightmares in their dreamers, causing damage to their psyche and a whole lotta pain. Now Littlest must find a way to strengthen the boy who has attracted these creatures so that he can be strong enough to face up to his own ugly memories. Of course, for all the fantastical dream-creature-like storylines, the real heart of this tale is in the story of the old woman, the boy, and the boy's mother. It's a very real tale too. The boy's mother has gotten out of an abusive relationship and is trying to piece her life together enough to take custody of her son again. And leave it Lowry to get me to tear up when the woman finally gets a good job in an elementary school. I don't tear up over children's books unless the writing is particularly phenomenal. Good fantasy speaks beyond the magic and fantastical elements of any given tale. Because she has tied in a story of abuse to one of the healing power of dreams, Lowry's story plays out rather beautifully. No mention is made of the fact that, medically speaking, if a person does not dream they go insane. The proof is before your eyes instead. Lowry also takes a rather nice poke at those adults that live in homes that look like they've come out of a magazine (all chrom

Some Violence as well

Published by Thriftbooks.com User , 15 years ago
I found this book to be very good, but John's nightmares of being abused by his father are somewhat graphic, and certainly not appropriate for all readers. He dreams of his father making him eat dog food and smearing his face in it as a 2 year old, and of his father repeatedly hitting his mother. I really liked the book, but one should be aware of its graphic content in places. Still, a very good read!
Copyright © 2020 Thriftbooks.com Terms of Use | Privacy Policy | Do Not Sell My Personal Information | Accessibility Statement
ThriftBooks® and the ThriftBooks® logo are registered trademarks of Thrift Books Global, LLC