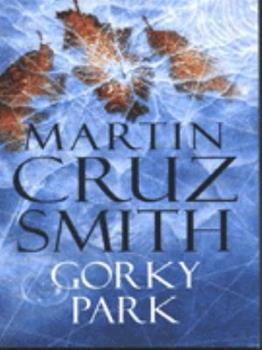 (Book #1 in the Arkady Renko Series)

This description may be from another edition of this product. The Arkady Renko book that started it all: the #1 bestseller Gorky Park , an espionage classic that begins the series, by Martin Cruz Smith, "the master of the international thriller" ( The New York...

Published by Robert Helliger , 3 months ago
In Moscow in 1981, three bodies have been found in Gorky Park, in Russia. Arkady Renko, a detective, is put on the case. As he investigates, he puts his life on the line in the process. Written by Martin Cruz Smith, "Nightwing", 1977, the action spy thriller sets the tone of future novels to come. Despite the success of the 1983 movie version, "Gorky Park", which is 40 years' old, is written in the classic tradition of John Le Carre, but with a Soviet feel to it, that creates a classic of modern Russian crime books. I highly recommend the book.

obvious why it became a series

Published by Thriftbooks.com User , 14 years ago
I read "Stalin's Ghost" as my first Renko novel, and decided to go back to the headwaters with "Gorky Park", not having any knowledge of the movie, either. It is clear why GP launched a series that lives today, from one side of the breakup of the Soviet Union to the other. The contrast between the two novels when read close together is substantial, given how different Russia is today from the Soviet era. However, in many other ways, it's the same old scene, ripe for observations light and dark about Russians, corruption, politics, vodka and the dreary nature of everyday life. With all the years in between, the Renko of the latter novel remains true to the Renko who debuted in Gorky Park. He is intelligent and a shrewd investigator underestimated by his enemies and rivals, he loves Russia while cynical about its flaws, he eschews the political games, he is persistent and dedicated to his craft while surrounded by corruption and slackers, and he appreciates attractive, mysterious women. He sounds like my kind of guy. I agree with another reviewer that Renko compares well with Harry Bosch of Michael Connelly's collection. The story itself has an excellent plot. The bad guys are not that hard to decipher, yet Smith keeps everything moving and sufficiently obscure. The identification of the dead threesome seemed rather easy, as did the quickness with which Renko hooked up with the young Irina. Osborne and some other supporting characters are finely drawn, and Smith also captures some essence of NY City for the eyes of a new foreign visitor. One advantage of the age of the novel and its setting: Renko succeeds more-or-less the old fashioned way. This is not CSI with fancy technology doing the work. Renko's brain was the main device. I must say, though, that the dwarf's reconstruction of the deceased's head did have a bit of 21st-century CSI touch about it. 4.5 stars, rounded up

A masterpiece of character and style.

Published by Thriftbooks.com User , 16 years ago
Calling this book a mystery is, at best, a misnomer. Though at first the book's considerable momentum comes from the discovery of three bodies in the titular park in Moscow, it isn't long before the scope of Smith's novel grows to encompass the greater mysteries of international politics, trade, and that greatest mystery of all, the human mind. In Arkady Renko we are given a fascinating protagonist, a brilliant, if world-weary, chief detective whose disillusionment with the apparatus and machinations of the Communist Party have left him to bump resignedly against a glass ceiling that show no sign of cracking. When he is first assigned the case of the Gorky Park murders, a gray and bitter Moscow is just around the corner from a thaw, a subtle progression that parallels Renko's own growth as a character. Martin Cruz Smith is a master at creating characters that seem to slouch out the page directly into your mind. Nothing stands pat in this Red Russia of the late 70's, and you will be kept guessing at everyone's motivations and histories until the very end. The stage against which this novel is set is almost operatic in grandeur and majesty. From the cold plains of Siberia to the towering industrial heart of Moscow, the setting becomes almost as large a character as Renko himself. This book should appeal to readers of any fiction. For fans of mystery, contemporary fiction, history and more, this is a truly breathtaking work from a author at the peak of his powers. From the first page the reader can't help but be carried away.

Published by Thriftbooks.com User , 16 years ago
Most mystery writers today produce books that are like cotton candy: they're light, fluffy, give you a quick sugar high, and are ultimately unsatisfying in the long run. Unfortunately, most of these writers produce a book a year-whether they have anything new to say or not. Once in a great while, a mystery writer comes along whose work is so broad in scope as to resemble great literature. Martin Cruz Smith belongs to this elite group, and Gorky Park is one of the best mysteries ever written. Arkady Renko is Chief Investigator of Homicide for the city of Moscow before the fall of communism. While he has a 100% success rate in investigating homicides, his personal life is less than stellar. Renko is called in when three faceless, fingerless bodies are discovered in the snow at Gorky Park during a spring thaw. He is able to take what little evidence there is, and starts putting together the pieces of this complicated puzzle. The closer he gets to the truth, the more evident it is that someone (maybe the KGB or even someone in his own office) does not want him to solve this crime. But what makes Gorky Park so fascinating is the Russian angle. Solving crimes and investigative techniques are a bit different than in the United States (they tend to use a lot of vodka, for one thing). Not only does Arkady have the party bureaucracy to contend with, but the KGB is also looking over his shoulder. It is often hard to tell who are the bad guys. We also get a glimpse of what it was like to live in Soviet Russia. Professionals like Renko didn't get very high salaries, and living conditions were often spartan. But where Cruz Smith really excels is in his characters. Renko is probably one of the most memorable characters in any mystery. He is a very likable, sympathetic man with a kind heart. His humble, self-deprecating manner belies a brilliant mind, which he needs to fight not just criminals, but also the Soviet system. But Renko also carries a lot of baggage, and it sometimes interferes with his job. Cruz Smith's plot will keep you up nights, reading to find out what happens. Gorky Park is also filled with ironic wit. Renko never tries to take himself too seriously, and we learn that humor is the best way to survive in the Soviet Union. When one character tells Renko that he wants to kill him, Renko responds "this is Russia. Get in line." The exchange between Renko and an FBI agent about defection will have you in stitches. If Gorky Park isn't the best mystery written today, it's certainly close to the top of the list.

start of a terrific series

Published by Thriftbooks.com User , 17 years ago
It was unfortunate I saw the Hollywood version of "Gorky Park" before reading the novel. The film does not do justice to the main character or the storyline. It cannot compare to the book! After reading "Polar Star" and Red Square", the second and third installments of the series, I picked up the original and loved it. More recently, "Havana Bay" was published, and later this year a long-awaited fifth novel, "Wolves Eat Dogs", will be released. Arkady Renko, the protagonist of the series, is an honest, dedicated, hard-working Ukrainian cop. When he was Chief Homicide Inspector for the Moscow Prosecutor's Office, he took charge of a grisly murder case involving the international fur trade. Very quickly, he fell afoul of the KGB. That's how his troubles began, which pursue him throughout all four novels. I recommend this series highly. The settings are supurbly drawn -- from snowbound Moscow to an Arctic Sea fish processing ship, from a steam-filled banya to the steamy port of Havana. Wherever he goes, Arkady brings his cynical love-hate relationship with the Soviet system which often impedes his work. Like Columbo, he outsmarts the sly evil-doers while seemingly fumbling his way along the investigation. And he has more lives than the proverbial cat as his sleuthing lands him in the most lethal stews! Author Martin Cruz Smith has created one of the most likable protagonists in police fiction. Cleverly writing the character as just "Arkady" -- intimately using his first name -- helps endear him to the reader. We care for Arkady because of his moral strengths, his humility and compassion, and despite his weaknesses. Along the way, Arkady has fallen obsessively in love with the most unsuitable woman imaginable: an obnoxious, abrasive dissident who not only treats him like dirt and breaks his heart, but is the cause of his political woes. It is hard to lament in the least her later demise! But we sympathize with our hero's suffering and rejoice in his small rewards. Reward yourself by reading this exceptional series, beginning with "Gorky Park"!

Perhaps the best of its genre

Published by Thriftbooks.com User , 20 years ago
I often return to "Gorky Park." I almost didn't go there at all. The film was not very good, although I liked Joanna Pakula. One day I read "Polar Star" (literally in one day, since I could not put it down) and I was hooked: I had to read "Gorky Park." Almost ten years later, I think I've read it ten times. I can always spare a day or two for one of my favorite books.Welcome to the world of Investigator Arkady Renko, whose superiors use him, whose wife doesn't love him, whose country is like an insane asylum where the pacients have the run of the place and sane people like Renko do the best they can. This is a great mystery novel, but the level of Smith's writing puts him far above the level of what we expect from "genre" novels. His characters became real people for whose fate I really cared. His plot is complicated but not overwhelmingly so. He does not trick the reader. And his detective, the militia investigator Arkady Renko, is one of the most memorable detectives in fiction: smart without being pedantic, intelligent, patriotic (yes, our Arkady truly loves his country), loyal to his friends and the woman he falls in love with. This is not the picture of a perfect man, but that of a basically good man. Renko is believable in his feelings and attitudes, and that is due to Smith's talent. Also thanks to the author we get an almost Dickensian description of Moscow and the inner workings of criminal investigations in the old Soviet Union. I felt I was in Moscow, and I finished reading the book truly caring for the characters in it, particularly Renko. Smith's novel is powerful, well-written, engaging, insightful, and a lesson in how talented writing can be applied to genre fiction for the benefit of everyone involved. "Gorky Park" and the other Renko novels are so far above genre, they make the rest look really bad, and they provide hope for genre novels in general: talent should not be divorced from entertainment. Excellent read.
Copyright © 2020 Thriftbooks.com Terms of Use | Privacy Policy | Do Not Sell My Personal Information | Accessibility Statement
ThriftBooks® and the ThriftBooks® logo are registered trademarks of Thrift Books Global, LLC