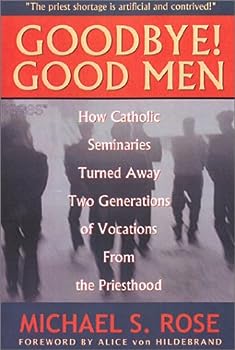 Goodbye! Good Men: How Catholic Seminaries Turned Away Two Generations of Vocations From the Priesthood

How did the American Catholic priesthood go from an image of wise, strong men like Spencer Tracy in Boys Town and Bing Crosby in Going My Way to an image of "pedophile priests"? In the New York Times... This description may be from another edition of this product.

Published by Thriftbooks.com User , 15 years ago
Many priests in the "know" have said that this book must be taken with a grain of salt. Unfortunately, they don't know how true Mr. Rose's book is. The previous review mentioned a seminary in Indiana. I happen to know for a fact that this seminary has a homosexual underculture manifested and the rector and vice-rector are indifferent and think nothing of expelling good, holy and orthodox seminarians while advancing the gay culture. Sure, they put on a good act of piety, but they demoralize, rob the dignity and integrity of the good seminarians and push the development of the "evil". Yes, evil is still thriving in our seminaries. I know, I have experienced it. I was a seminarian in this seminary for 2 years.

So True its Scary

Published by Thriftbooks.com User , 16 years ago
Having spent ten years in the seminary studying to be a Catholic priest for the Diocese of Orange in California, I picked up Rose's piece of work on a whim. The first couple of pages scared the hell out of me because he is right on target. The seminary system in and of itself is corrupted at its core... more time was spent in class discussing heretical theologicans and the need for openness towards women than the actual studies that would help us be priests! Homosexuality was in full force and more than a few guys were openly dating each other. Rose exposes these troubled times within the seminary system with a full force that should be acknowledged. Until the Bishops of America decide to overhaul the seminary system and strengthen the requirements of prayer and the Mass and eliminate the feel good spirituality classes that are taught there, the Church will continue to suffer. I personally know some of the persons written by Rose... and none of it surprises me.

Published by Thriftbooks.com User , 17 years ago
This book will turn your stomach, the way Rose describes how psychological terrorism, militant homosexual intimidation, and brazen heretical teaching have been used to force out orthodox seminarians in many of our US seminaries. This may sound extreme and implausible, but Rose presents not so much an argument as an agonizing parade of fact--interview after interview, statistic upon statistic. In the end, Rose does tie it together with a theory that seems eminently sensible: that our American priest shortage is a self-fulfilling prophecy. Liberal bishops seek an end to the celibate priesthood. Seminaries under their control are thus staffed with like-minded administrators, teachers and formation faculty who promote agendas of sexual liberation, feminism, sacramental irrelevance, etc. Orthodox candidates leave. This creates a severe shortage of priests, providing a convenient excuse to promote ordination of women and lay ministries--in short a "new" (i.e., Protestant) Catholic Church. Conversely, in conservative American dioceses, where young men of orthodox spirit are welcomed instead of repelled, vocations are on the rise, and priest shortages are less severe or non-existent. Rose contends the root of the problem goes back to the self-indulgent philosophy of the '60's. Self-fulfillment becomes more important than self-sacrifice. Experimentation displaces tradition. Pleasure trumps propriety, and moral relativism replaces moral objectivism and its corollary, rational thought. While these new values crept relatively slowly into American culture at large, they quickly gained power in our seminaries. The cumulative result is a priesthood without a clear identity, either of itself or to lay Catholics and the secular world. While many attribute the horrible sexual scandals of the priesthood to the practice of celibacy, Rose believes the explanation is just the opposite. Such scandal has arisen out of an immoral atmosphere of feel-good ethics and outright disdain for Catholic teaching. Rose believes the problem can be fixed, but first it must be understood.

Wow! Tears the lid off the current seminary scandal.

Published by Thriftbooks.com User , 19 years ago
Michael Rose could not have put together a more timely book. Goodbye! Good Men exposes the degradation and immorality found at several Catholic seminaries and through first-person accounts explain how faithful priestly candidates over the past two decades have been turned away.Rose, familiar to most through his work profiling the "wreckovations" performed in Catholic cathedrals and parishes in his books, The Renovation Manipulation and Ugly as Sin, does a bang-up job profiling the depths of sexual perversion rampant in major U.S. seminaries. The book is not for the faint of heart.The book goes a long way in explaining the recent sexual scandals plaguing the Church. Those shocked by the scandals, will be even more shocked when they read the book. If even a portion of what Rose documents is true, the worst is yet to come.

Published by Thriftbooks.com User , 19 years ago
This book gets at the hidden roots of the spiritual malaise in American Catholicism, especially in the priesthood. It notes the sexual decadence and theological heresy that has suffocated many a seminary and many a diocese. The extensive documentation is often painful reading of a spiritual and academic elite that has completely lost its moral bearings. Most heartbreaking are the accounts of sacerdotal vocations destroyed by a formation bureaucracy that will only award dissent and moral laxity. The proposed remedy of genuine moral reform is as convincing as is the portait of the decadence of Amchurch.
Copyright © 2022 Thriftbooks.com Terms of Use | Privacy Policy | Do Not Sell My Personal Information | Accessibility Statement
ThriftBooks® and the ThriftBooks® logo are registered trademarks of Thrift Books Global, LLC