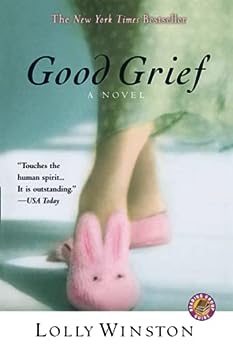 A brilliantly funny and heartwarming debut about a young woman who stumbles, then fights to build a new life after the death of her husband. The perfect book for anyone who has ever been heartbroken,... This description may be from another edition of this product.

6 ratings
Write a review
Published by Laura Burns , 7 years ago
I honestly couldn't finish this book. It was far too sad. Very well written though!

Sophie's Bakery for The Broken Hearted

Published by Thriftbooks.com User , 13 years ago
One of the best books Lolly has done. Please write more! You are Wonderful!

Published by Thriftbooks.com User , 16 years ago
Well, you know the phrase, "leave them wanting more". Lolly Winston did. (WHEN is that next book available?) I wanted to know how the rest of the character's lives panned out, and wanted another book by the same author the minute I was done with the first. Lolly took a subject that our culture finds difficult to discuss, talks about it openly and honestly, and pokes some fun at it along the way. Her characters are flawed and complex, as is her portrayal of grief. My favorite character was Crystal. As a mom of two teenage girls, I wonder if Lolly has spent the last year doing research in a high school - even the teenage vernacular is right on the money! Couldn't put it down, and I can't wait for the next book. Keep 'em coming!

A Laugh out Loud Emotional Tearjerker

Published by Thriftbooks.com User , 18 years ago
"Good Grief" is a wonderful book about the sad topics of loss and grief. Sophie Stanton has lost her husband Ethan to Hodgkin's disease after three short years of marriage. She isn't prepared to be a widow at such a young age and is not sure how she is supposed to act or what she is supposed to do, so she stays in the house, rarely gets out of bed, and shops at the 24 hour market in the middle of the night. She loses her job and decides to sell the house and move up to Oregon to live with her good friend Ruth. Sophie's hopes by moving to Oregon that she'll be able to escape - no more phone calls for Ethan, no more junk mail with his name on it, no more mother-in-law around all the time. What she isn't expecting is how hard it is to start over. She hasn't dated in awhile and her new job as a waitress is proving to be more difficult than she'd thought. "Good Grief" had me laughing out loud several times and also made me shed some tears. From the very beginning of the book, it was so easy to relate to Sophie. She's a real character who loses some of her sanity under tragic circumstances and then fights to get it back. All in all, this is a great book that I would highly recommend to anyone looking for a well written, emotional yet funny story.

Published by Thriftbooks.com User , 18 years ago
Good Grief belongs to a sub-sub-genre of women's fiction. Likeable woman faces crisis. Discovers herself through transforming domestic, warm-and-fuzzy talents into a commercial enterprise. And, if single, she gets a romantic interest as a bonus.As it happens, I rather like this sub-sub genre. And Lolly Winston gives us a heroine who's likeable and intelligent. She adds an edge by giving us a blow-by-blow account of a year in the life of a grieving widow. In this case, the grief seems especially painful because Sophie, the heroine, is young, and because she lost her own mother at a very young age.Sophie's grief seems like a blanket someone has thrown over her life, stifling her energy. Like most employers, Sophie's company allots a limited time for grieving. After that, Sophie is supposed to be a cheerful PR person, extolling the virtues of some deeply flawed medical product. Just as she hits bottom in her career, an old friend invites Sophie to move from California's Silicon Valley to Ashland, Oregon. And Sophie's new life begins.Sophie finds a charming rental cottage and a job in a restaurant, where she gets downgraded from waitress to salad prep and then to pastry, where she finds her true niche. She begins to study baking in earnest and, along the way, finds a new love and a new career.Of course, it's not quite that easy. Sophie becomes a Big Sister (the reasons are a little value and I'm surprised she was accepted, given her grief-stricken state). Her Little Sister, Crystal, isn't the cuddly eight-year-old she expected, but a tough-talking teen with a ditzy mom and potentially serious problems. Some of Sophie's descents into grief can be hard to read, despite a comedic element. Sophie's opening party pushes the envelope when anything that can go wrong does go wrong. In the end Sophie emerges as a strong heroine, although some elements of the happy ending owe more to luck than to Sophie's efforts. As a career coach, I wish these authors wouldn't make starting a business seem so effortless. But I have to say that most career transformations happen just this way: putting one foot in front of the other, remaining open to new options, and being willing to follow your passion to see where it leads.

Published by Thriftbooks.com User , 18 years ago
Sophie Stanton wants to be a "Jackie Kennedy kind of widow. Slim and composed, elegant and graceful." She does a decent job of it until three months after her husband's death when she drives her car through the garage door ... twice. As her grief and despair drag her down in their undertow, she becomes more of a "Jack Daniels kind of widow --- wailing in the supermarket and mowing through the salad bar, hair all crazy like an unmade bed."Married for only three years, Sophie is a widow at thirty-six, having lost her husband to cancer. She sits in a lonely house with a leak she doesn't know to fix. Her job is a joke, with the boss from hell. Her only family lives three thousand miles away from her Silicon Valley home, where she moved to be with her husband.As she works her way through the stages of grief --- denial, anger, depression, bargaining and acceptance --- Sophie adds a few of her own: eating an entire family pack of Oreos in one sitting under the bedcovers, having a breakdown in the produce section of the grocery store, and going to work in her bathrobe and pink bunny slippers.Unable to stand her empty house any longer, Sophie decides to start over in Ashland, Oregon, where her best friend Ruth lives. She toasts her decision with a martini that she drinks from the empty urn that once held Ethan's ashes. "I drink my martini from the urn, its square edge sharp against my lips. Everything in the room begins to soften, and moving up to Oregon doesn't seem so scary." This is a chance for her to be "Sophie Enid Stanton: widow. Starting over."She can't outrun her grief, but in Ashland Sophie finds that there is "solace in offering solace to others." She applies to the Big Sister program, and instead of the adorable seven- or eight-year-old she had envisioned, her "little sister" is Crystal, a thirteen-year-old with more problems that Sophie. Crystal lives with her indifferent single mother, struggles in school and has a dangerous fascination with fire.Things continue not go smoothly as Sophie take a job as a waitress in a local restaurant. After a series of mishaps, she is relocated from the dining room to the kitchen --- a blessing in disguise because she's soon creating and preparing desserts and enjoying it --- an experience that leads her to open her own bakery.Her love life is slower in coming around than her professional life, as the handsome actor she meets just might be too good to be true. After all, she reasons, he must harbor a "dark, psycho-killer secret because everyone knows all the nice, smart, normal men are married. Only the trolls are left."A novel about a woman coping with grief might seem off-putting, but not in Lolly Winston's hands. Sophie's circumstances are the catalyst for the unfolding of the story, and Winston combines emotion and humor to create a poignant tale that will draw you in from the first page.GOOD GRIEF is a story about love, loss, friendship, courage, and most of all, renewal. In the end, Jackie Kennedy or J
Trustpilot
Copyright © 2022 Thriftbooks.com Terms of Use | Privacy Policy | Do Not Sell My Personal Information | Cookie Preferences | Accessibility Statement
ThriftBooks® and the ThriftBooks® logo are registered trademarks of Thrift Books Global, LLC