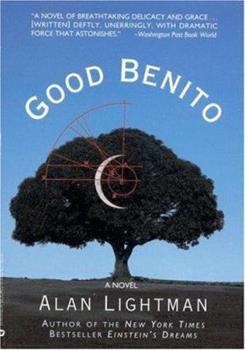 Bennett "Benito" Lang is a lonely and confused young boy who finds solace in the ordered and rigorous laws of mathematics and physics. But as an adult, when he most needs the irrefutable order and precision of science itself, Benito will learn that, despite its expansive beauty and power, it is no match for the unfathomable desires and pains of the human heart. Lightman is the acclaimed author of Einstein's Dreams.

Lightman is a marvelous writer

Published by Thriftbooks.com User , 16 years ago
I would probably give this novel 4 stars, but I'm giving it 5 to boost up its average. Do ignore the other negative reviews. Though the plot of the story is by no means extraordinary, Lightman makes up for it with his elegant prose. His writing is poetic, subtle, and sensual. Artistic rationality. I would read his writing for the turn of the phrases, for the cadences of the speech.

The Benito is a superpartner to Einstein's Dreams

Published by Thriftbooks.com User , 19 years ago
Good Benito seems to have been somehow overlooked amid the attention to other Alan Lightman greats like Einstein's Dreams and The Diagnosis. That's unfortunate, since Benito shares equally with those two books in its ability to linger and continue growing larger in your mind long after reading it. This one has the curious twist of centering on an alter ego of the author, as with Orson Scott Card's "Lost Boys," with parallels eerily close enough to make you wonder how much or how little the author is taking liberties with biographical experiences. To see for yourself, compare fictional Bennett Long's breakthrough in globular cluster dynamics in Benito, with real-life Alan Lightman's breakthrough in globular cluster dynamics in the Review of Modern Physics (Volume 50, page 437, published 1978).As such, the novel stands as much a creative quasi-autobiography as an apological defense for leaving a profession in physics. For Bennett strives constantly for a rational universe capable of becoming well-understood. But while his study of physics delightfully rewards this instinct, the vicissitudes of human life and the mysteries of human behavior are far more ambiguous and troubling. This plays out almost in a series of vignettes not unlike Einstein's Dreams in structure, with serial encounters and comraderies punctuated by modernist episodes of detail-laden solitude. A pot-smoking MIT roommate, a brilliant but estranged childhood friend, a gambling-addicted uncle, a compassionate nanny, and a harried astronomer, among others, all puzzle Bennett with their irrational motivations. The novel is book-ended by the most notable subjects: the last is a beautiful and talented but implacably narcissist lover, while it begins with the most incomprehensible of all possible crazies in Bennett's world: a great physicist devoid of ego. The cumulative exploration of the limits of human reason is tied up nicely at the conclusion, wherein Bennett and his nephew float on a fishing boat amid an incoming fog and test their reactions to feeling lost in the blank shroud of human existence. Lightman's writing style conveys profound insight with sparse dialogue offset by revealing details of action and form. The questions it raises are subtle to the point of seeming to arise spontaneously in the reader's mind. An obliquely haunting story.

A fine book. Worth reading

Published by Thriftbooks.com User , 22 years ago
I don't agree with some of the reviewers below. I don't think this book was written with the intention to depict the main character, Bennett ("Good Benito"), as a rational man struggling with the irrational behavior in this world. I think it is about an obsessed, knowledge-seeker, curious and candid man struggling with his own solitude. But anyway, that's my opionion and guess. My recommendation is for you to buy it; it is a nice piece of literature. It has almost no physics or math, only the necessary to mold a credible character.

Published by Thriftbooks.com User , 22 years ago
A great break from frilly, over-written fiction, this book is beautifully written and wonderfully imaginative. Benito is a real charcter--finally someone that the intelligent portion of the population can identify with. I liked it very much and plan to read it again.

A Rational Man Confronts the Irrationalities of life

Published by Thriftbooks.com User , 23 years ago
Throughout this book, the reader is drawn into Bennet's beautiful, sometimes comedic, but ultimately fruitless quest to reconcile his scientific, absolutist philosophy with the quirks and challenges of life. His decision to leave his wife, based upon a pseudo-mathematical reasoning, is a perfect example of this. The decision makes him sick with grief, yet he follows his reasoning and leaves. How can a scientific man face the all-to-emotional experience of life? Lightman shows the reader, through Bennet's strained relationships, that it is nearly impossible to do so, and the ambiguous ending leaves the reader to wonder if Bennet will allow him to bring his mind and heart into alignment. I thought that "Einstein's Dreams" was one of the best books I had ever read, but this work leaves me breathless every time I pick it up. By the way, does anyone know of where I can get my hands on the book mentioned in Good Benito, "Tactile Mountains," by Lucien?
Copyright © 2020 Thriftbooks.com Terms of Use | Privacy Policy | Do Not Sell My Personal Information | Accessibility Statement
ThriftBooks® and the ThriftBooks® logo are registered trademarks of Thrift Books Global, LLC