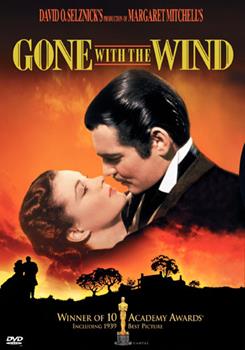 Gone With The Wind

Margaret Mitchell's "Immortal tale of the old South" has Leigh as Scarlett and Gable as Rhett. The burning of Atlanta was a high water mark for screen excitement. As poet Ogden Nash put it, "The Civil War was quite a fight and not a mere diversion; I never knew how tough it was before [producer] Dave Selznick's version."

Different disc inside ..."hope floats" was inside.

Published by Major C. Brown , 1 month ago
I just hope to get this fixed. I am already spending WAY too much time on this!!!

Published by Desiree , 3 months ago
Was told it’s in good condition and it doesn’t even play, it’s too scratched up so that was a waste of money

Published by Margaret C. Hemenway , 3 months ago
GWTW is not only a love story but an epic war story-- a drama that tells the tale of our nation's most devastating war with a southern perspective sadly missing in history classes. Vivien Leigh, an English actress who bested the long list of US actresses wanting to play Scarlett, deserved her Oscar for playing main character Scarlett O'Hara. It's regrettable that Clark Gable didn't win one too, because Rhett Butler was undoubtedly his finest role as an actor. Hattie McDaniel won an historic Oscar for a brilliant portrayal of Scarlett's "mammy," often flummoxed trying to get Scarlett to behave. She was Scarlett's strongest moral influence after her mother's death, having raised her from infancy. McDaniel was the first black actress to win an Oscar, yet Hollywood made her receive her award in a segregated facility. Margaret Mitchell's best-seller is a must read-- couldn't put it down when I read it as a teenager. They remain my favorite movie and favorite book.

Get it before it's banned

Published by thrifty reader , 6 months ago
Yes, this film was made in the 1930s by confederate-loving Hollywood. However, it remains a film classic and those who know the film know the obvious objectionable scenes. Plenty of this saga isn't objectionable and is a visual triumph. You certainly won't see it on television. For those interested in GWTW the Mitchell biography by Anne Edwards, "The Road to Tara" is a good read.
Trustpilot
Copyright © 2022 Thriftbooks.com Terms of Use | Privacy Policy | Do Not Sell or Share My Personal Information | Accessibility Statement
ThriftBooks® and the ThriftBooks® logo are registered trademarks of Thrift Books Global, LLC