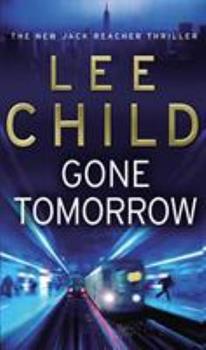 #1 NEW YORK TIMES BESTSELLER - THE BLOCKBUSTER JACK REACHER SERIES THAT INSPIRED TWO MAJOR MOTION PICTURES AND THE UPCOMING STREAMING SERIES REACHER "High-powered, intricately wrought... This description may be from another edition of this product.

Published by Thriftbooks.com User , 13 years ago
Some time ago, I read Lee Child's Without Fail. I remember it as an exciting read, but it didn't cause me to seek another Child novel. Recently, I picked up Gone Tomorrow. Simply put, it's a great book. If you're willing to accept the basic premise that a spellbinding adventure could flow from witnessing a woman (a complete stranger) kill herself on a New York subway, then the book makes sense. The hero, Jack Reacher, is a fortyish veteran of thirteen years' service as an MP officer. As an MP, he was engaged in special investigations all over the world. He developed first-rate fighting skills and marksmanship. Now, he wanders about on a limited budget confronting (and relishing) any dangerous challenge that comes his way. Reacher is a sort of James Bond on the cheap. He stays in expensive hotel rooms at a steep discount by bribing maids and night clerks to let him in off the books. He takes a bus to get around. He'll walk to save bucks. He remembers where there's a cheap eatery with good food. Reacher is also largely uncomfortable with today's technology. He describes himself as the only guy in America without a cell phone. He's unsure about how to play a DVD in a computer. Gone Tomorrow centers on a search for a flash drive that contains a picture that may incriminate John Sansom, North Carolina Congressman and senatorial candidate. The picture was taken in Afghanistan in 1983 when Sansom met with what many consider to be the most evil man on the planet. Sansom, the DOD, FBI, Homeland Security, and a particulary vicious (but stunningly beautiful) terrorist, Lila Hoth, all want that picture in the worst possible way. Lila proves to be almost as cunning and resourceful as Reacher. Child pays meticulous attention to detail. The story is set in Manhattan and Child shows a familiarity with the island and its people that could only come from tirelessly roaming the mean streets himself. The book clearly reflects careful writing and editing. There are no typos, no awkward phrases. Not a single useless character.

Bad Jack is back

Published by Thriftbooks.com User , 13 years ago
Bad Jack is back After several mediocre Jack Reacher novels, Lee Child is back with a superb action thriller reminiscent of his original Reacher books. What makes Mr. Child's books so entertaining is his attention to detail as he develops the complex story. Gone Tomorrow is classic Child right from the get-go, "Suicide bombers are easy to spot. They give out all kinds of telltale signs." Boom, it's off to the Reacher races. Sharp, short, descriptive sentences that grabs the reader and immediately involves him/her in the violent world of Jack Reacher. Gone Tomorrow is both a simple and complex tale. It is layered just right to keep the reader guessing and uses misdirection as a literary art form. Reacher is smart. He uses his Common Sense and police mind experience to piece together a tale of violence and intrigue. A woman, who Reacher thinks is a suicide bomber, commits suicide by gunshot on a subway when Reacher tries to intervene. The cops come, he is detained as a witness, and the Gone Tomorrow tale takes off in literary fury. Mr. Child is a true master storyteller and to tell you more would simply spoil this wonderful novel. Outstanding character development. I never tire of learning new facets of Jack Reacher's life. Mr. Child has a unique way of fully developing all of his story's characters. By the end of the book you feel like you know exactly who the main characters are and why they do what they do. Refreshing and masterful use of an array of different character types. No gratuitous language or sex but intense and graphic violence. But isn't this why we read Mr. Child? The author has this unique way of writing about violence in a way that is not gratuitous but story enlightening. Reacher does what Reacher does because that is what is required of him to survive. Strong recommend. Worth the price of a hardback, or get it at your local library. Jack Reacher is one of my favorite characters along with Harry Bosch and Mitch Rapp. I'm very happy that Mr. Child has returned Jack to that apolitical, unflappable loner that we all have grown to admire and enjoy. Looking forward to Mr. Child's next Jack Reacher novel,

Published by Thriftbooks.com User , 13 years ago
A Lone Ranger for the 21st Century, former MP Jack Reacher's 13th one-man pursuit of justice opens with him on the New York subway at 2 a.m. eyeing a woman who hits every bullet on the suicide bomber checklist. But what the woman is carrying is not a bomb. It's a handgun and she blows her own head off when Reacher confronts her. " `I think you tipped her over the edge,' " says Theresa Lee, the cop who conducts the investigation afterwards. Lee apologizes for the remark but it sticks with him as several sets of other investigators - shady and official - prod him for information and he discovers that the dead woman worked in an innocuous government job. Everyone involved - from the FBI on down - seems to fob Reacher off with falsehoods and spin and nothing quite spur's Reacher's need to know like a lie. As he digs he turns up connections that go deep into a Senate candidate's distinguished and secretive military career, an Afghani widow's tragic story, and her beautiful daughter's quest for justice. If flattery won't get him, then bullets will seems to be the mantra of the various human obstacles in Reacher's path as he doggedly, dazzlingly works out complex, top-secret plots and histories and then patiently, cleverly goes up against overwhelming odds, with little more than Theresa Lee as a hamstrung aide. A snappy, cunning, diabolical plot master with an engaging stand-up individualist as a hero, Child has given us another top-notch, page-turning winner of a thriller.

With my personal guarantee

Published by Thriftbooks.com User , 13 years ago
Some readers were disappointed by Nothing to Lose. They have my personal guarantee that they will not be disappointed by Gone Tomorrow. Jack Reacher is back and he's back with a vengeance. Literally. The story opens with Reacher on a northbound NYC subway car, one built in Japan, to specifications which he discusses in detail. Why? Because Jack is a curious man and so are the readers who overhear him telling his stories. He also details the specifications because they will come back to play a role in the story several hundred pages later. On that car, in the middle of the night, a woman who appears to be a potential suicide bomber does something else instead. Her action haunts Jack and he does not rest until he knows the reasons for her actions and exacts vengeance on those who have caused those actions. Except for some brief moments in Washington, Gone Tomorrow is set in Manhattan, a city that both Jack Reacher and his creator know very well. The wide cast of characters includes members of the NYPD, the FBI, miscellaneous defense/homeland security types, some private security forces and some uber-baddies from Turkmenistan. The plot involves actions from the early 1980's and actions from today's headlines. The plot is as tight (to adapt one of the novel's similes) as the endpoint of the alimentary canal of a piscine creature. There is a bit of sex and a great deal of violence (strong but not pornographic). The novel is replete with information, as Child taps into the wellsprings of the techno-thriller. There is also a great deal of ratiocinative mystery: how can you find someone in NYC in the middle of the night? How can you deduce the likely behavior of an individual from the scant remaining facts at your disposal? What are the best moves to employ against two individuals coming at you with brass knuckles? Why do you need a glove to operate a certain form of automatic weapon? How do the government's security-system computers operate? This is Lee Child at his best: jackhammer suspense, pages flipping at light speed and Jack Reacher in full-tilt sarcastic mode, with a small army of baddies deserving of the business end of his best skills. Only one bit of advice: begin it when you have the time to finish it, because that is exactly what you will want to do. This is primo stuff; don't miss it.

Lee Child is back in form

Published by Thriftbooks.com User , 13 years ago
The first and best news is that Lee Child is back in form with "Gone Tomorrow". While not the all time best Reacher novel that I have read, this is a more than satisfactory addition to the series. It involves some truly unpleasant villains, a politician with a deeply guarded secret, a missing son and plenty of tension. One thing I love but also find quite disconcerting when I'm reading a Reacher novel is the way that he deliberately seeks out and provokes the bad guys. It's so much the opposite of the way that I would behave that I find it quite nerve-wracking to read. And in this book, he does it a LOT. It starts with Reacher on a New York subway in the small hours of the morning. He spots a woman, Susan Marks, whose behaviour meets every criteria for a suicide bomber. She's not. But she is a woman in trouble. Reacher can't help Susan, but he can't let the matter rest until he finds out what was behind her state of mind and finds the people who drove her to that point. Although at various times he recruits her brother and a friendly police officer as allies, essentially this is Reacher taking on the bad guys on his own. The first half of the book is all set up and it's quite gradual. Reacher is a little slow off the mark: there are a couple of revelations that seemed pretty obvious to me, but which take some time to emerge. On the other hand, I wasn't sure for quite some time who the villains would turn out to be, which I enjoyed. In the second half, Reacher goes after the villains: this half is dead exciting and includes some of the most graphic descriptions of violence that I can remember Lee Child writing. There is one central implausibility: Reacher is told repeatedly that he'll be in deep trouble if he finds out a particular secret. But when he does find it out, suddenly it doesn't seem to matter that he knows. Reacher also has developed an unlikely ability to track down his adversaries with ease. Some key plot elements are left unresolved. And the obligatory roll in the sack feels just that: out of place and only there because it's expected. However, at the end of the day the book's momentum means that these are just annoyances, not critical flaws. Unusually, this book is written in the first person (as if Reacher is narrating): only three other Lee Child books have used this. It's not my preference given that Reacher is such an enigma, but it works fine. It's a great read: enjoy!
Trustpilot
Copyright © 2022 Thriftbooks.com Terms of Use | Privacy Policy | Do Not Sell or Share My Personal Information | Accessibility Statement
ThriftBooks® and the ThriftBooks® logo are registered trademarks of Thrift Books Global, LLC